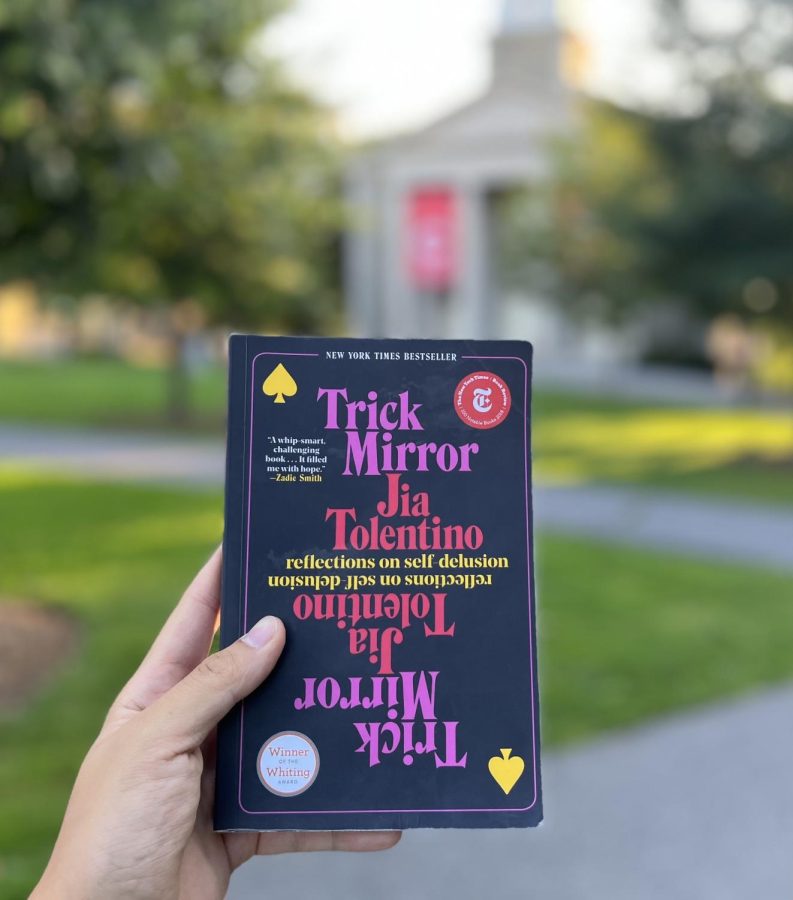 In an era that can only be characterized by the excessively used phrase ‘unprecedented times,’ Jia Tolentino’s Trick Mirror, a collection of cultural critique essays published in 2019, is eerily predictive of the disorder that has permeated the 2020s. Each of the book’s nine essays blends the author’s personal experience with social issues, such as the commodification of oneself under capitalism, the impact popular female narratives have on women’s self-image and the glorification of scammer culture.

Tolentino writes from the perspective of having an adolescence heavily influenced by exposure to the internet, one that is undoubtedly shared by many current college students, and shares the problems that can arise when day-to-day life is increasingly dominated by time spent online. She grapples with this tension in the book’s first chapter, “The I In The Internet,” where she connects social media’s ability to distort one’s perspective of themselves and the world around them to political participation. She writes, “In the absence of time to physically and politically engage with our community the way many of us want to, the internet provides a cheap substitute…opinion stops being a first step toward something and starts seeming like an end in itself.”

Though her essay responds to the role social media played in the 2016 election and the #MeToo movement, parallels can be drawn to the digital landscape during the 2020 Black Lives Matter protests, an environment that continues to impact the way individuals engage with activism today. People who were unable to leave their homes due to COVID-19 restrictions took to the internet to express their views and learn more about our nation’s ongoing reckoning with racial injustice.

The most infamous moment of this period of heightened online activism was Blackout Tuesday, when millions of Instagram users posted a black square on June 2, 2020 to show solidarity with the Black Lives Matter movement. Retrospectively, this act did more harm than good as it clogged many users’ feeds with black squares – preventing them from seeing vital information about protests and genuine political action they could take – and the post now comes across as more of an empty virtue signal towards one’s followers rather than a genuine action against racial injustice.

Another example of Tolentino’s quote recurring in our present is the rise of infographic accounts like @so.informed (previously @soyouwanttotalkabout). These pages post aesthetically pleasing slideshows explaining current political and social issues to raise awareness about them among their followers. While not inherently problematic, boiling down complex issues into a singular post can deter followers from looking elsewhere for news or acting further beyond a mere glance at the post.

Accounts like @so.informed create a culture on social media where people, as Tolentino states, “view all new information as a sort of direct commentary on who they are” and further reinforce the notion that the opinion an individual inherits from these posts is enough action for progress.

Beyond social media, Tolentino’s writing changes the reader’s perspective on the previously mundane and unexamined moments in life, such as ordering a Sweetgreen salad. In the chapter “Always Be Optimizing,” Tolentino describes how fast-casual restaurant chains and boutique fitness classes prime and reinforce the hyper-productivity placed on individuals under capitalism: “Barre feels like exercise the way Sweetgreen feels like eating: both might better be categorized as mechanisms that help you adapt to arbitrary prolonged agony.”

As seen with the beginning of the COVID-19 pandemic, the pressure many felt to dedicate their newfound extra time to more exercise and cleaner eating, as well as the subsequent pressure to lose the ‘Quarantine 15,’ reflects Tolentino’s theory that “the worse things get, the more a person is compelled to optimize.” Few writers have been able to provide the intellectual and well-researched insight Tolentino adds to our society’s current obsessions.

With ever-changing trend cycles, Tolentino’s work has managed to age flawlessly and shines a spotlight on current issues that were once inarticulable for past generations.