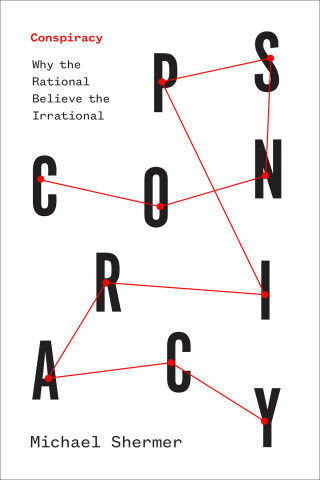 There is little doubt these days that belief in irrational conspiracy theories is a widespread societal problem. What might in the past have been dismissed as a fringe phenomenon is clearly not. Numerous surveys have borne this out, showing, for example, that half of Americans harbor at least one conspiracy theory.2

Also readily apparent now, if it wasn’t obvious before, is the potent destructive power of such beliefs—as seen in the COVID-19 pandemic, and in the toxic political polarization of the last few years. But in fact, conspiracy beliefs have always been very widely prevalent, and the assumption that they are mainly the domain of mentally unstable or low-functioning individuals on the fringe of society was always a myth, even for the more outlandish beliefs.

The observation that belief in conspiracy theories is a mainstream phenomenon is one of the starting points for the deep and engaging analysis by Michael Shermer in his book: Conspiracy: Why the Rational Believe the Irrational.3 Shermer is the founding publisher and editor-in-chief of Skeptic magazine, a multiple New York Times bestselling author, and was a monthly columnist for Scientific American for 18 years. He is a leading expert on “why people believe weird things” (the title of his first book, in 1997).

He reminds us that conspiracies (“two or more people, or a group, plotting or acting in secret to gain an advantage or harm others immorally or illegally”) do occur quite often, and occasionally the conspirators are indeed people at high levels of democratically elected governments or trusted institutions.

Nevertheless, Shermer suggests keeping in mind what he calls a conspiracism principle: Never attribute to malice what can be explained by randomness or incompetence. Furthermore, even many real conspiracies turn on chance, coincidence, and contingency. In contrast, people prone to believe in conspiracy theories tend to believe that nothing happens by accident, everything is connected, and there are no coincidences. They usually imagine conspirators as “preternaturally competent” and “unusually evil,” often with elaborately grand schemes.

A phenomenon cutting across demographics and political orientation

People on the political left often assume, incorrectly, that belief in conspiracy theories is an overwhelmingly right-wing phenomenon. Yet, to cite just two of many examples, 911 Truther conspiracies and GMO conspiracies have been predominantly believed by people on the left.4

Political scientists Joseph Uscinski and Joseph Parent found that conspiracists (believers in conspiracy theories) “cut across gender, age, race, income, political affiliation, educational level, and occupational status.” Education does appear to reduce conspiracism: 42% of those without a high school diploma scored highly in having conspiratorial predispositions, compared with 22% of those holding postgraduate degrees.5 Yet, the fact that over one in five Americans with MAs or PhDs believe in conspiracies indicates that there are additional determining factors besides education.6

Why do so many people believe conspiracy theories, even outlandish ones?

Shermer hypothesizes that there are three overarching factors at work, which he calls:

Shermer suggests that layered on top of these three overarching factors are a number of additional well-recognized psychological and sociological forces that serve to reinforce conspiracy belief:

Cognitive bias and habits of thought

[See footnote 9 for definitions, explanations and examples of the following]

Even highly educated and highly intelligent people are bedeviled by many of these, and as Shermer points out, they are even better at rationalizing and justifying beliefs that they hold for non-smart reasons.

The research on personality factors predisposing to conspiracy belief is inconclusive, but findings do point toward certain traits being more associated with such belief. These include [See footnote 10 for definitions and explanations]:

An additional factor in the appeal of conspiracy theories, one also borne out by research, is their entertainment value—“not unlike science fiction, fantasy, horror, detective, and adventure novels and films that titillate readers and viewers with fantastic Manichaean stories of good and evil forces and people plotting to assassinate a foreign leader, overthrow a political regime, conquer an evil empire, or even rule the world.”11

Academic researchers Eric Oliver and Thomas Wood have extensively researched susceptibility to conspiracy theory belief. In their 2018 book Enchanted America: How Intuition and Reason Divide Our Politics, they identify a more general factor accounting for such susceptibility, one that is broadly consistent with all the other factors discussed above:

“Our central argument is that the most important political division in the United States is […] between Rationalists and Intuitionists. Rationalists are people who comprehend reality using nonintuitive sources. They utilize abstract theories, philosophical deductions, and observable facts. They view social and political problems in a dispassionate manner, seeking pragmatic, technical solutions. They exist all over the political spectrum but generally share a common respect for science and reason. They may adhere to different philosophies, but inevitably, they all draw from the same intellectual wells dug by Locke and Kant, Smith and Mill, Keynes and Hayek.” —Oliver and Wood, Enchanted America12

The higher a person’s Intuitionism score, the more likely that person will also be drawn to religious, spiritual and other supernatural beliefs, paranormal beliefs, and unscientific alternative medicine.13, 14

The internet and social media

Conspiracy theories are nothing new, and neither is their widespread uptake. But there is no doubt that the internet and social media have made their spread much easier and faster.

The social psychologist Jonathan Haidt provides a particularly excellent analysis of the dumbing-down effect of social media on civil discourse and rationality in his 2022 article in The Atlantic: “Why the Past 10 Years of American Life Have Been Uniquely Stupid.”15

Societal stress, instability and uncertainty increases the receptivity of citizens to conspiracy theories, as we saw during the COVID-19 pandemic. Similarly, in times of political instability, economic insecurity, and war. Cultural anxiety about erosion of values may also contribute, as during the “culture wars” of the last few years.

Shermer provides many examples of real conspiracies in recent and distant history, using those examples to illustrate how actual conspiracies tend to unfold, and in many cases to unravel or ultimately be exposed. He highlights the many differences compared with imagined conspiracies. For example, in real conspiracies, things seldom go according to plan, schemes are thwarted by unforeseen circumstances and obstacles, people mess up, become afraid, change their minds, can’t keep their mouths shut, defect or betray each other, or become whistle-blowers motivated by moral scruples or by personal gain and fame. The more complex a conspiracy and the more people it involves, the harder it is to control all the variables, pull off the plot, and keep it all secret.

Nobody is in control

Part of the appeal of conspiracy theories is that it is more comforting to believe there is a simple order and coherence to the world—even when we believe the bad guys are trying to take control. At least we, the clever good guys, have gained special knowledge of their plot and can engage in a righteous fight to thwart their evil intentions.

The true complexity of the world is much harder to grasp.16

Ultimately, as Oliver and Wood point out, conspiracy theories are intuitively compelling and comforting for many of the same reasons that normal, ubiquitous beliefs like religion and spirituality are so natural to most of us.18