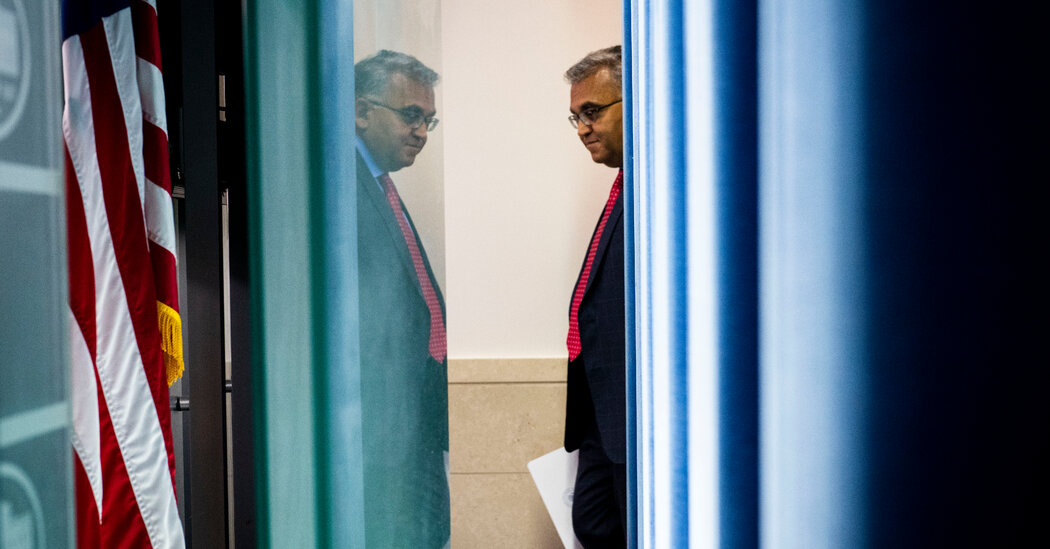 Dr. Ashish K. Jha, the White House’s new Covid-19 coordinator, said on Tuesday that as the United States sees an increase in known coronavirus cases and keeps a watchful eye for new variants, the administration was not seeking to stop every infection.

Making his first appearance at a White House news briefing since he assumed the role earlier this month, Dr. Jha cited the relatively low number of new deaths — though around 300 a day were “still too high,” he added — and hospitalizations at their lowest point in the pandemic. Those tallies, set against the rising number of cases around the country, amounted to a promising “inflection,” he said.

Asked what Americans should make of high-profile people such as Vice President Kamala Harris testing positive for the virus, Dr. Jha said that with such a contagious virus spreading, it would be “hard to ensure that no one gets Covid in America.”

“That’s not even a policy goal,” he said. “The goal of our policy should be: obviously minimize infections whenever possible, but to make sure people don’t get seriously ill.”

The average number of confirmed new cases a day in the United States — more than 49,000 daily as of Monday, according to a New York Times database — is comparable to levels last seen in late July, even as cases have risen by over 50 percent over the past two weeks, a trend infectious disease experts have attributed to new Omicron subvariants.

Dr. Jha warned that “we are going to see cases go up and go down during this pandemic as we head into the weeks, months and years ahead.” The more important reflections of progress, he said, would be whether health care systems are strained, and whether people are hospitalized with and dying from Covid-19.

Since the arrival of Omicron in the United States, other top federal health officials have made similar arguments. Dr. Janet Woodcock, then the acting Food and Drug Administration commissioner, told lawmakers in January that infections for many people were inevitable.

“It’s hard to process what’s actually happening right now, which is, most people are going to get Covid,” she said. “What we need to do is make sure the hospitals can still function, transportation, you know, other essential services are not disrupted while this happens.”

That thinking is codified in the Centers for Disease Control and Prevention’s recent changes to mask-wearing guidance, which uses Covid-related hospital admissions and the percentage of hospital beds occupied by Covid patients, in addition to virus case counts, as markers for whether certain communities can go without masks.

Around 15,000 people are in U.S. hospitals with the virus each day, similar to numbers from the earliest weeks of the pandemic. Dr. Jha on Tuesday pointed to the protection offered by vaccines and treatments, including Pfizer’s antiviral pill Paxlovid, which he said the administration was making a new push with to reach vulnerable Americans and doctors he said were too hesitant to prescribe the drug.

He also implored lawmakers to fund more of the federal Covid-19 response, as a relief package that would inject $10 billion to the effort is stalled in the Senate. Dr. Jha displayed a graphic that showed other countries investing in more vaccines and medications, a clear suggestion that the United States was delinquent in prioritizing the same issues.

That relief package is not set to include what the White House had hoped would be billions more in funds for global Covid-19 response efforts, including the work of getting shots into arms.

“There are some people in this country who sometimes think that we can take a domestic-only approach to a global pandemic,” Dr. Jha said. “That’s not a thing. You can’t do that.”