The Perfect Enemy | The way, the truth and the fight
Skip to content
October 4, 2022
Read Time:9 Minute

MARYSVILLE, Ohio — This one-time farm town about 30 miles northwest of Columbus is booming.

The century-old Marysville Church of Christ is not.

Even before the pandemic, the congregation in central Ohio struggled to increase its flock, much less match the area’s rapid growth. 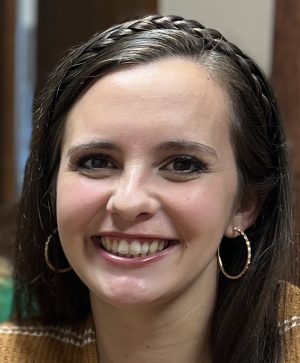 The past few years only exacerbated the numerical concerns as the congregation — like many Churches of Christ — grappled with COVID-19 restrictions, George Floyd’s murder and the nation’s political polarization.

“It’s not just the debates that are going on and the differences in opinion,” said Madison Darby, 27, a freelance editor whose husband, Bishop, serves as associate minister. “It’s the emotional tension that seems to be really big in the country as a whole.”

Minister and elder Jeff Darby, Madison’s father-in-law, feels that tension, too, in this Republican-leaning city of 26,000. Nearly two-thirds of voters supported former President Donald Trump in 2016 and again in 2020.

“It makes it tough. It really does,” the 50-year-old preacher said of staying focused on kingdom matters. “We really strive not to engage in political things, especially something that is clearly not a Scriptural issue.”

He’d rather focus on his congregation’s mission field — the thousands of new homes and apartments that keep replacing Marysville’s soybean and corn cropland.

“We are seeing astronomical growth,” the Lipscomb University graduate said of the residential construction. “Literally within two miles of our church building is some of the fastest-growing population in the state of Ohio.” 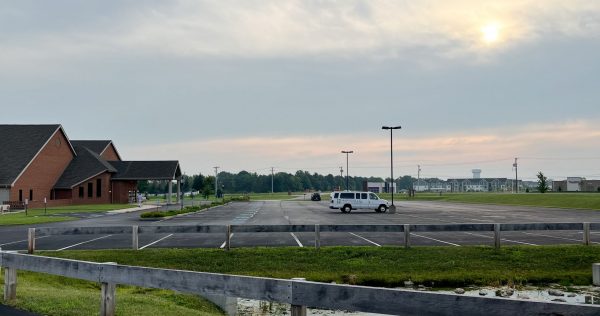 The Marysville Church of Christ in central Ohio has struggled to increase its flock, much less match its community’s growth.

‘Fields are white for harvest’

Major employers include a Honda assembly plant and the headquarters of the lawn-and-garden company Scotts Miracle-Gro.

As farmers and factory workers gather for Sunday worship, Darby likes to step down from the pulpit and stand by the tall windows that frame the red-brick church building. 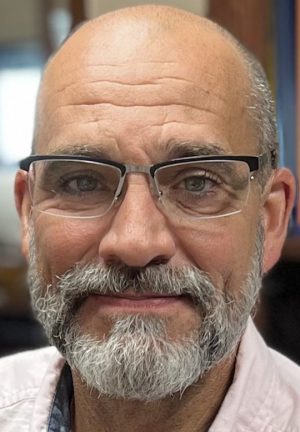 The former middle school biology teacher, who spent over a decade as the Buckeyes for Christ campus minister at Ohio State University, emphasizes the soul-winning opportunities just outside the sunlit glass.

“The fields are white for harvest,” Darby told The Christian Chronicle, repeating Jesus’ words in John 4:35. “It’s very much a common theme for us.”

But amid the turmoil over societal issues, the church has lost more members than it has gained.

Before the pandemic, weekly attendance averaged about 200. Since then, that count has fallen to about 140 — a 30 percent drop.

“We had a little swell right before COVID where we were really rocking it,” said Darby, who has preached in Marysville since 2013. “Then COVID came and really rocked us, like it did a lot of churches.” 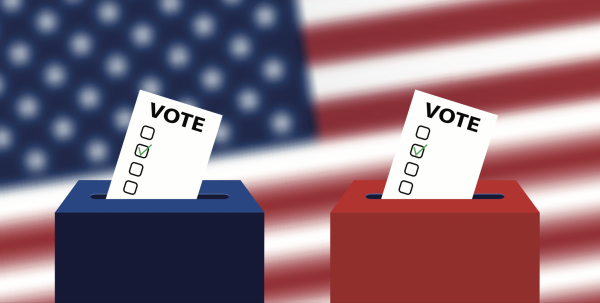 Why are some Christians so angry?: As political division festers, ministers urge fellow believers to focus not on the donkey or the elephant — but the Lamb. Read Bobby Ross Jr.’s related story.

Darby blames the post-COVID decline on a variety of factors.

For one, the church’s handling of the pandemic — which arrived in the U.S. in early 2020 — impressed some members as “cowardly and unfaithful.”

They did not like that the elders moved services online via Zoom — and then outdoors with social distancing at the Union County fairgrounds.

By the time the congregation resumed normal assemblies, some disgruntled members had found new church homes.

“In the midst of all of this, we had a new idol come out, and I call it political idolatry,” said Melissa Cottrill, 55, whose husband, Scott, serves as one of the church’s five elders. “You had people taking a political view and making that religion. … They’ll have to give an account to God.”

“In the midst of all of this, we had a new idol come out, and I call it political idolatry. You had people taking a political view and making that religion.”

Equally disruptive, Darby — an adoptive father of three African American children — organized a video dialogue with Black preachers after Floyd was killed in Minneapolis police custody on May 25, 2020.

A half-dozen families left the church as a result.

“I would say, ‘Help me understand why you’re upset about this. Have I done something wrong? Is there something Scripturally wrong?’” Darby said. “And it really just came down to the fact that they were angry that it was brought up. … I don’t know how many times I heard, ‘Well, I never owned slaves.’”

Like its surrounding community, the Marysville church is predominantly White.

“Marysville seems to me to be a fairly traditional small rural town in Ohio,” said John Green, director emeritus of the Ray C. Bliss Institute of Applied Politics at the University of Akron. “But that area around it is becoming more urban in that it’s part of this growing Columbus metropolitan area.” 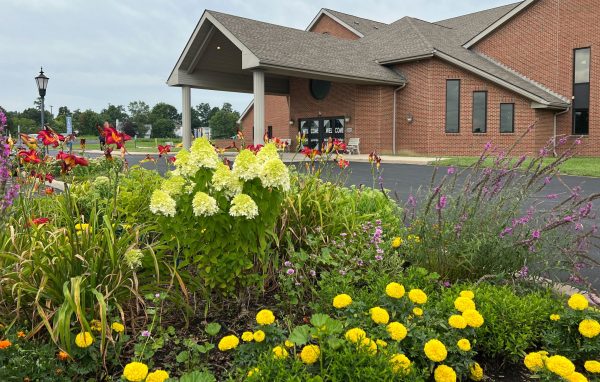 Flowers bloom outside the Marysville Church of Christ building in central Ohio.

As member Jillian Bryant sees it, the easiest way for the Marysville church to grow would be to embrace partisan politics.

The 35-year-old mother of three likes to listen to Christian podcasts. An idea from a recent one resonated with her: “The quickest way to shrink a church is to stay in the faithful middle with Jesus.” 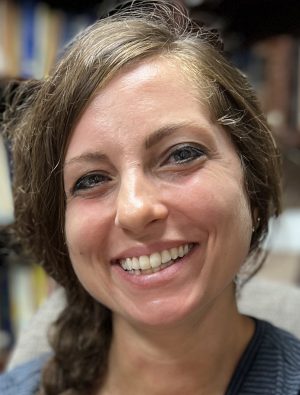 She still remembers a sermon series Jeff Darby preached at the fairgrounds pavilion in the fall of 2020.

“Basically, I had goosebumps,” she said. “He said, ‘Hey, whoever wins the election doesn’t matter. Jesus is our king. We are ambassadors here on Earth. And our kingdom is heaven.’”

As the YMCA of Central Ohio’s senior vice president for housing and healthy living, Sue Darby — the Marysville preacher’s wife — helps provide places for the homeless to live.

In her view, COVID-19 exposed “the glaring misstep of aligning Christianity with political action.”

“We were so politically driven during COVID — masks, no masks,” Sue Darby said. “Jesus did not come on this earth to die for any kind of earthly kingdom. … And I think COVID really showed that to the churches.”

“If we pick a side, if we say, ‘Hey, gun control, this is what we want,’ then the people who don’t believe that … we are isolating them.”

The church can’t say “God is love” and then take sides on politics, said Showalter, the niece of elder Maurice Eastridge and church secretary Donna Eastridge.

“If we pick a side, if we say, ‘Hey, gun control, this is what we want,’ then the people who don’t believe that … we are isolating them,” Showalter said. 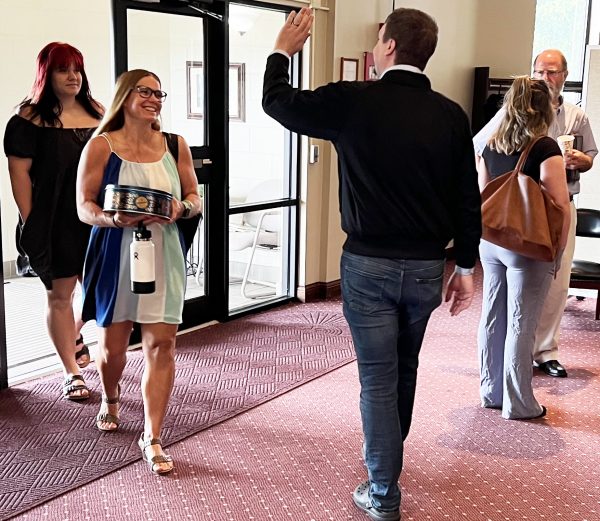 Associate minister Bishop Darby prepares to high-five Angie Saiter and her daughter, Maddie, as they arrive for worship at the Marysville Church of Christ in Ohio.

What is — and is not — Scriptural

Avoiding politics in the church is not as simple as it might sound.

As Jeff Darby readily acknowledges, “There’s always going to be a disagreement about what is and what is not clearly a Scriptural issue.”

In the case of racial strife after Floyd’s death, he said, “We were very intentional about crafting statements that proposed understanding, reconciliation, forgiveness, passion, empathy. … We always made statements that were supportive of the best principles of both sides.”

After the U.S. Supreme Court recently overturned Roe v. Wade, the 1973 decision that legalized abortion nationwide, church leaders did not applaud or condemn the ruling.

“There’s always going to be a disagreement about what is and what is not clearly a Scriptural issue.”

Throughout the recent difficulties, the elders have tried to demonstrate unity despite differences, Jeff Darby said. 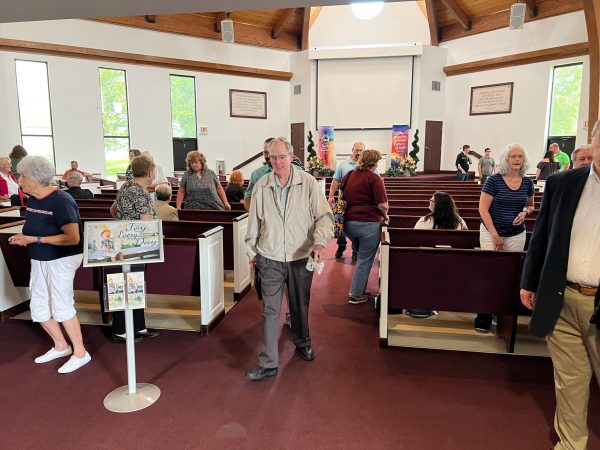 Member David Canterbury walks toward the foyer after a Sunday service of the Marysville Church of Christ.

After years of upheaval, Scott Cottrill, a 56-year-old business consultant, is ready to focus on the future.

While smaller in number, the members who stayed represent a dedicated core, the church elder said.

“We’re friendly. We’re warm. We’re connected,” he said. “And I feel like there is a very strong relationship and base there. The question is, how do we grow from that base?” 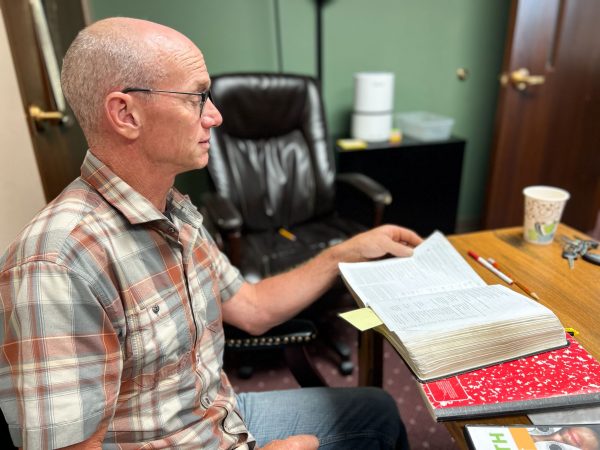 Elder Josh Fairchild reads a Bible verse during a Sunday morning meeting with the Marysville Church of Christ’s leaders.

“A visitor never comes here without several people welcoming them,” Fairchild said. “It’s just, I still struggle with — I know numbers aren’t everything, but how do we get more in the church?”

From hosting an annual fall festival to organizing food trucks and activities in its parking lot, the church welcomes hundreds of neighbors via community outreach events.

Even though those efforts have not translated into church growth, the elders said they remain committed to sharing the Gospel.

The pandemic reinforced the need to consider less traditional methods, the leaders said, and be willing to engage uncomfortable topics, from women’s roles to gender identity questions.

“We’ll continue to press forward and be a light to this community to bring people to Christ,” said Maurice Eastridge, an animal nutrition professor at Ohio State. “How many in number? I don’t know. But we’re seeking, and I think that’s the key thing.” 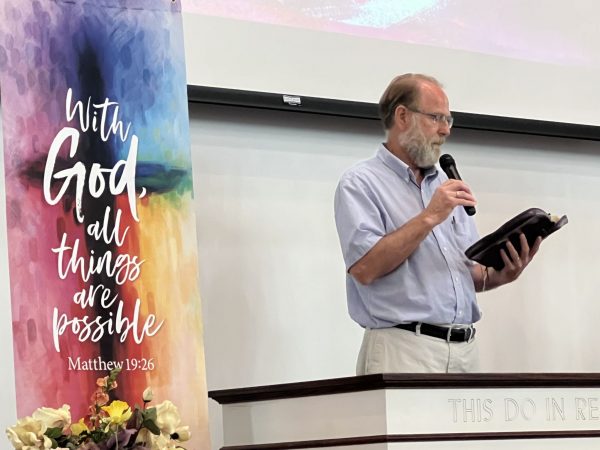 Laurie Belville, a Marysville member for 27 years, prays the church will remain focused on God — and steer clear of partisanship.

“It goes back to not making it political,” the grandmother of six said. “Jesus paved that path clearly. He said it was about reaching out and serving and loving.”

BOBBY ROSS JR. is Editor-in-Chief of The Christian Chronicle. Reach him at [email protected].