The Perfect Enemy | Summer starts in Europe with new Covid wave
Skip to content
July 5, 2022
Read Time:9 Minute
This is the weekly edition of CNN’s coronavirus newsletter. Look out for your roundup every Wednesday. If you haven’t subscribed yet, sign up here.
The European Centre for Disease Prevention and Control (ECDC) warned last week that “the growth advantage reported for BA.4 and BA.5 suggest that these variants will become dominant” throughout the European Union, and probably result in a surge in cases.
Infections are rising in multiple countries, including Portugal, Germany, France, Greece, Austria, Italy, Switzerland and Spain, according to the Our World in Data (OWID) project at the University of Oxford, which tracks the pandemic.
New studies have shown that Omicron subvariants BA.4 and BA.5 have a growth advantage compared with earlier variants and appear to be good at evading the immune system. In other words, neither previous infections nor vaccines provide particularly strong protection against the subvariants, which is why they’re becoming the dominant strains. BA.4 and BA.5 do not appear to lead to more severe illness, but, as with previous waves, the increase in cases could result in an uptick in hospitalizations and deaths, the ECDC has said. 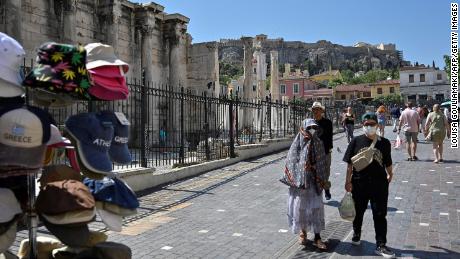 The potential impact of one of the subvariants, BA.5, is most apparent in Portugal, where it has fueled a significant rise in Covid-19 infections. That surge now appears to have plateaued, but is still higher than rates elsewhere. On Tuesday, the country registered a daily average of 1,332 new cases per million people over the previous seven days — the fifth-highest new case rate in the world. That compares with Germany’s 760 and France’s 747, according to OWID.
The number of people in hospital in Portugal, at 1,896, is nearly as high as it was during the original Omicron wave in January. BA.5 became the dominant strain in the country in May, not long after it was first detected in late March, according to Portugal’s National Institute of Health (INSA). By June 5, it accounted for 84% of all Covid infections there.
In France, the number of new cases per million people has nearly tripled since the beginning of the month, and hospitalizations are rising for the first time since the beginning of April. According to the public health agency Santé Publique France, in its most recent update, BA.5 rose to 24% of sequenced cases in the week of June 6, compared with 18% the week before.
French vaccination chief Alain Fischer said on Wednesday that the question wasn’t whether the country was facing a new wave of the virus, but what intensity it might have, saying he was personally in favor of reinstating some restrictions to limit the spread.
“The epidemic is accelerating again and it is completely unexpected in this season,” Dr. Benjamin Davido, an infectious disease specialist at the Raymond-Poincaré hospital outside Paris, told French radio on Sunday.
“With the new Omicron subvariants (BA.4 and BA.5), which are 10% to 15% more contagious, the epidemic has found new energy, even though we have passed through the winter,” Davido said, adding that the lifting of almost all restrictions — like wearing masks on public transportation and airplanes — combined with unraveling immunity, posed a real threat.
Davido and other health experts have warned that hospitals in France could fill up over the summer, unless vulnerable people and those over 60 get booster shots as soon as possible. But while hospital admissions in the country are on the rise, it’s not yet clear whether that’s down to the BA.5 subvariant being more transmissible or because it is escaping dwindling immunity.
In the UK, where cases and hospitalizations are rising sharply, the start of a new wave also appears to be driven by BA.4 and BA.5, according to the Office for National Statistics (ONS). The latest data from the ONS, released on June 17, showed that Covid infections were up 43% week on week, according to the British Medical Journal (BMJ), a peer-reviewed medical trade journal.
Writing in the BMJ, Christina Pagel, professor of operational research at University College London, said, “We will be the first (but not the last) major country to have a BA.4.5 wave after having had two previous Omicron waves. This means that we might get some additional protection from the high number of infections we had in March which will reduce the size of this coming wave. Nonetheless, a significant proportion of the country will get sick, especially as boosters are waning.”
It looks like the United States might not be far behind. The latest data from the US Centers for Disease Control and Prevention (CDC) shows BA.4 and BA.5 caused more than one in three Covid-19 infections in America last week. The subvariants are also expected to dominate transmissions in the US within the next few weeks.

YOU ASKED. WE ANSWERED.

Q: What are the Covid-19 vaccine side effects in young kids?
A: Covid-19 vaccinations for children younger than 5 were rolled out this week after the US Food and Drug Administration (FDA) and CDC signed off on the shots’ safety and efficacy. Like with any vaccine, though, it’s possible kids may experience a few side effects.
“The most common side effects from either of the vaccines are still the most common side effects we see from pretty much any child that gets any vaccine,” said Dr. Grant Paulsen, the principal site investigator for the Pfizer and the Moderna Covid-19 vaccine clinical trials for kids from 6 months to 11 years old at Cincinnati Children’s hospital.
These include pain, swelling and/or redness at the injection site and fever. During the trials on the youngest children, myocarditis was not found to be a problem, but Dr. Claudia Hoyen, director of pediatric infection control at UH Rainbow Babies and Children’s Hospital in Cleveland, assures that they will “have all the mechanisms in place once we start vaccinating kids” just in case.
Send your questions here. Are you a health care worker fighting Covid-19? Message us on WhatsApp about the challenges you’re facing: +1 347-322-0415.

READS OF THE WEEK

Covid-19 vaccinations begin for US children under 5
Covid-19 vaccinations for children younger than 5 began Tuesday across the United States, marking a milestone in the nation’s fight against the disease and making it the first country in the world to offer the shots for children as young as six months old. About 17 million kids under 5 are now eligible for vaccination.
Dr. Sarah Schaffer DeRoo described in one word how she felt after getting her 7-month-old son vaccinated against Covid-19: thrilled.
Her active baby boy sat in her lap at a vaccine clinic hosted by Children’s National Hospital in Washington, DC, while receiving his first dose. The shot was administered in his thigh. He cried for a few seconds but then his attention turned to a golden retriever that was on site as a comfort dog provided by the hospital.
These children lost their young parents to Covid-19
More than 202,000 US children have lost one or both parents to Covid-19, according to estimates from Imperial College London, Holly Yan reports.
Laila Dominguez, 13, has suffered from anxiety since her father’s death in January. When Covid-19 struck both her parents last winter and her father was hospitalized, she helped watch her two younger siblings and take care of her mother, who was severely sick.
At times, “it will get really, really dark. And sometimes it’s way too much for me,” Laila said. Her last experience taking care of her traumatized siblings led to a panic attack.
Laila hopes more kids will learn from her story and take Covid-19 seriously, saying that to bullies who taunt her for still wearing a face mask, she bluntly answers: “My dad died.”
“What I wish they knew about Covid is how dangerous it is … and be more aware of what they say.”
Macao shuts most businesses as Covid cases surge, but casinos remain open
The world’s biggest gambling district began its second day of mass Covid-19 testing on Monday after dozens of cases were detected over the weekend.
City officials have begun closing schools, tourist attractions, cultural venues and all non-essential businesses. Restaurants have been ordered to suspend dine-in services.
But for casinos, it’s business as usual.
Macao’s government relies on casinos for more than 80% of its income, with most of the population employed directly or indirectly by the industry. While they remain open, analysts expect them to be hit as the government urges residents not to visit entertainment venues.
The testing of Macao’s roughly 600,000 residents is expected to end on Tuesday. The Chinese-ruled former Portuguese colony adheres to China’s strict zero-Covid policy that aims to eradicate all outbreaks at just about any cost.
Surviving 70 days in Shanghai — the ‘world’s strictest lockdown’
When CNN producer Serenitie Wang left Covid-stricken Hong Kong in March, she was hoping to escape to safer pastures. Instead, she was just swapping the world’s biggest outbreak for the “world’s strictest lockdown” in Shanghai — and 70 days of enforced confinement.
“Covid could seemingly pass between the floors and walls and the realization even the strongest measures couldn’t stop it was terrifying and shocking,” she writes about the spread of the virus in her parents’ 21-story residential housing compound, where she was staying.
When she tested positive, she was taken to a “fangcang” — a public venue repurposed for people with Covid, where she was given a cot and a bag containing bedding, a basin and cup for washing, a toothbrush, toothpaste, a towel and slippers.
She was in a room with 3,000 strangers, each hoping for the negative test results that would secure their release — some remaining positive long after their symptoms disappeared. Everyone was trying to remain optimistic; meals were even delivered with encouraging fortune-cookie style messages attached.
Bottom line: Get vaccinated
Since the CDC recommended two Covid-19 vaccine options for children under 5 — one from Pfizer/BioNTech and another from Moderna — parents and caregivers may be wondering which one is right for their child.
But pediatricians CNN spoke with around the country suggest either is a good option. Their advice? Just get the vaccine that’s available.
“I do not think it’s clear that one is any better than the other. They are different,” said Dr. Paulsen of Cincinnati Children’s. “It is very much what the parents prefer. Balancing those differences as well as, honestly, what’s available and what their pediatrician has or what the local hospital has.”
Doctors also suggest looking online or calling to find out what the local site is offering. Not every location will offer both shots. Some clinics may also not be offering vaccinations for small children or may have restrictions on the ages they serve. Vaccines.gov may be helpful. The website provides some information on clinics listed by category.

LISTEN TO OUR PODCAST