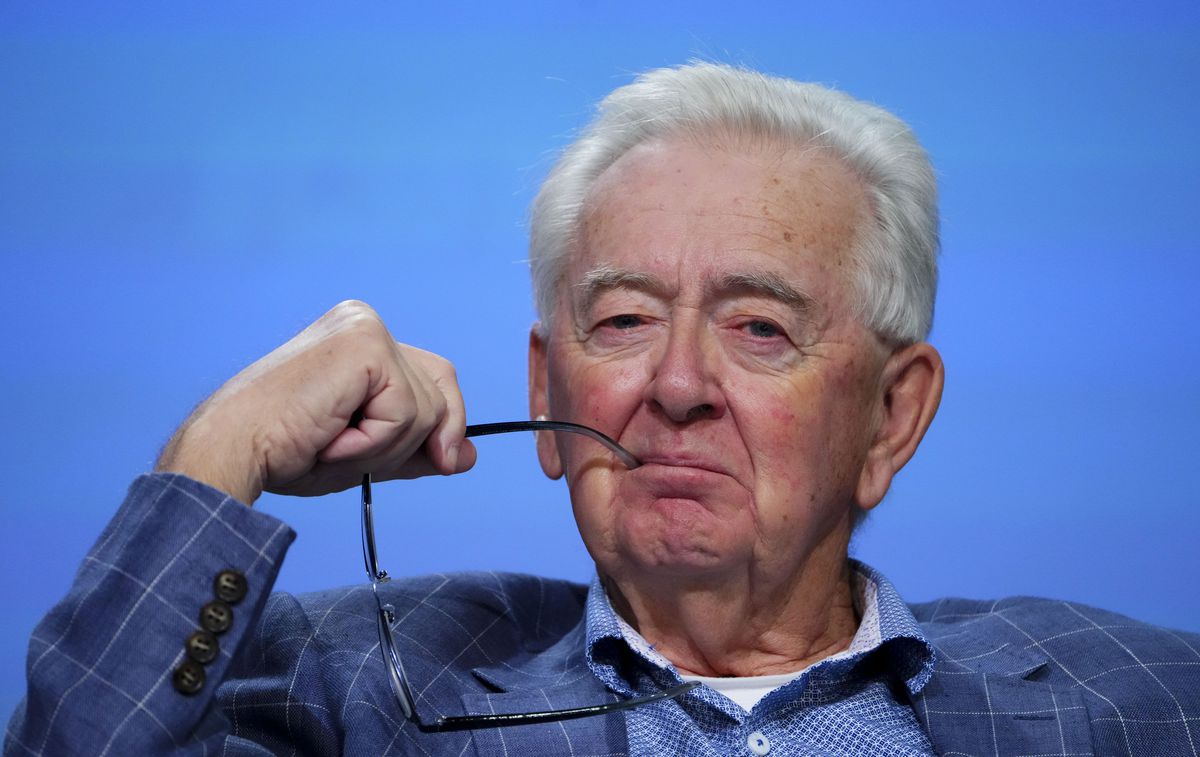 On Friday, Mr. Manning played down the combativeness of the event – story here – telling journalists that “80 per cent of it was on issues,” and saying the candidates were trying out their positions and figuring out how to conduct themselves.

But he added, “My caution has been I worry about the internal competition getting too personal. I’d like to see them stick to the principles and policies.”

“My worry is frankly with your media folk, if somebody gets up there, says some extreme thing, criticizing others – that’ll be the headline even if somebody else comes up with the answer to sliced bread.”

Mr. Manning was speaking at the at the 14th annual conference of the Canada Strong and Free Network, formerly the Manning Centre, which was named after Mr. Manning.

Five of six candidates for the Conservative leadership attended the debate, which comes ahead of a pair of party-organized, official debates this month. The first is next Wednesday. The second is in Montreal on May 25.

Among those present for the conference was Alberta Premier Jason Kenney, a former federal Conservative cabinet minister. Asked for his take, he said: “It was a fiery debate.”

Mr. Kenney, who endorsed Erin O’Toole in the last Conservative leadership race in 2020, said he was not going to endorse any candidate at this point.

Interim federal Conservative Leader Candice Bergen welcomed a combative race. “This is not a battle for the faint of heart. That, too, is a good thing,” she said in a video address to the conference.

“Leadership races mean criticism, which can be tough and sometimes unforgiving,” she said. “But the fact of the matter is, as most of us in this room know, our leadership race is, by almost every metric, a very positive event.”

She said the race has engaged thousands of Canadians who were not previously engaged.

Although Ms. Bergen said she agreed with Mr. Manning’s position on personal attacks, she added that “politics is a clash of values hidden beneath the veneer of public policy.”

This is the daily Politics Briefing newsletter, written by Ian Bailey. It is available exclusively to our digital subscribers. If you’re reading this on the web, subscribers can sign up for the Politics newsletter and more than 20 others on our newsletter sign-up page. Have any feedback? Let us know what you think.

TEEN CHARGED WITH TERRORISM – The RCMP has charged a 19-year-old man with terrorism, alleging he was participating in the activities of a neo-Nazi terrorist group. It is the first time, experts say, that Canada’s criminal anti-terrorism laws passed in the wake of the Sept. 11, 2001 attacks have been directly applied to such an organization. Story here.

CSIS ISSUED WARNING OF ELECTION VIOLENCE – Canada’s main intelligence agency says domestic extremism has risen during the pandemic and it had warned federal agencies that the 2021 federal election could be a target for violence. Story here.

OTTAWA CRITICIZED FOR RESPONSE TO `DISPROPORTIONATE’ INCARCERTATION OF INDIGENOUS WOMEN – The head of Canada’s most prominent advocacy group for Indigenous women chastised the federal government on Thursday for its response to a Globe and Mail story detailing the overrepresentation of Indigenous women in federal prisons. Story here.

TESTIMONY ON FORCED STERILIZATION INDIGENOUS WOMEN – The Senate’s human-rights committee has heard this week from several Indigenous women who say they were coerced into receiving sterilization procedures after giving birth at hospitals, a problem advocates say is well known enough that it has made others reluctant to seek medical care. Story here.

NOVA SCOTIA SCRAPS TAX HIKE ON NON-RESIDENT PROPERTIES – Nova Scotia Premier Tim Houston has reversed course on a plan to hike taxes on properties owned by non-residents, saying he was concerned about the damage it would cause to the province’s reputation as a place to visit, live and invest. Story here.

NO CONSEQUENCES OVER ALLEGED TRUDEAU REMARK: SPEAKER – After reviewing an accusation by the Conservative Party that Prime Minister Justin Trudeau dropped an “F-bomb” in the House of Commons on Wednesday, the House speaker said no consequences will ensue. Story here from CTV.

GG’S FRENCH NEEDS WORK: LEGAULT – Governor-General Mary Simon, the first Indigenous person named as the Queen’s representative in Canada, still has some work to do on her French, Quebec Premier François Legault says. Story here. On another note, the Governor-General will, next week, be making a visit to a number of remote northern Quebec communities, including her own hometown. Story here.

TODAY IN THE COMMONS – Projected Order of Business at the House of Commons, May 5 accessible here.

BERGEN HAS COVID-19 – Interim Conservative Leader Candice Bergen says she tested positive for COVID-19 earlier this week. “I am feeling good and I will be out of isolation very soon,” she said in a video clip, accessible here, posted on Twitter.

CHAMPAGNE HEADED FOR GERMANY AND BELGIUM – Innovation Minister François-Philippe Champagne will be travelling to Germany and Belgium from Sunday, attending the G7 Digital Ministers meeting in Düsseldorf, Germany.

On Friday’s edition of The Globe and Mail podcast, The Globe’s senior foreign correspondent Mark MacKinnon talks about how he has been banned from entering Russia. He joins a long list of Canadians who can no longer enter the country, including the Prime Minister, almost every member of Parliament and some Canadian mayors. Many of the Canadians who are part of this Russian list are proud of it, or laughing it off. Mr. MacKinnon is not. The Decibel is here.

In the Greater Toronto and Hamilton area, the Prime Minister held private meetings and was scheduled to meet with families who have resettled from Afghanistan.

Bloc Québécois Leader Yves-François Blanchet is on the Magdalen Islands on Friday for a visit that runs to May. 9.

No schedules released for other party leaders.

Campbell Clark (The Globe and Mail) on how the Conservative debate was about more than who supported the trucker convoy first: “The early days of the Conservative leadership campaign have featured top-tier candidates declaring each other unfit to lead, exclusionary and untruthful, so you had to wonder what would happen when they were asked to debate face-to-face. Insults? Badgering? Accusations? Yes, yes and yes. Two things rang out through the 90-minute debate: posturing about truckers’ convoys and nasty exchanges.”

Andrew Coyne (The Globe and Mail) on Pierre Poilievre’s baseless campaign to ‘restore’ the Bank of Canada’s independence is in fact an assault on it: “As a populist, Mr. Poilievre is unusual in that he is attacking the central bank for being too soft on inflation, rather than too hard. But give him time. The politician who is willing to play games with central bank independence is less interested in any particular outcome than he is in being seen to be responsible for it. He’s for hard money now, but he could as easily be for soft money if it suited his purposes. Which is a good argument for keeping him as far away from temptation as possible.”

Kelly Gordon (Contributed to The Globe and Mail) on how overturning Roe v. Wade is just the latest act in a long-running American tragedy: “As distressing and harmful as the overturning of Roe will be, it’s important to keep in mind that Roe never magically secured access to abortion for many Americans, especially marginalized women. As reproductive justice advocate Monica Simpson reminds us, “Roe never fully protected Black women – or poor women or so many others in this country. That’s because Roe ensured the right to abortion without ensuring that people could actually get an abortion.” Much will be made of the lessons to glean from the death of Roe v. Wade, but perhaps one of the most important is that an abstract constitutional right to abortion does little to promote reproductive freedom.”

Andrew MacDougall (The Ottawa Citizen) on why Canada’s Conservative contenders should learn the Stéphane-Dion lesson: “The would-be Tory leaders are now participating in a series of official debates that will be watched closely by their membership, yes, but also by their political opposition. And while it matters greatly what the candidates say about themselves, what they say about their opponents might matter more in the long run. This is the lesson Dion learned the hard way with his bid for the Liberal leadership. Although the former academic-turned-ardent-federalist-turned-author-of-the-Clarity Act-turned-environment minister had a record of achievement in government longer than a Leonard Cohen poem, he was undone by criticism from a political novice, Michael Ignatieff, in one of the leadership debates.”

Graham Thompson (CBC) on what Alberta Premier Jason Kenney’s outspoken UCP caucus mutineers will do should he win the leadership vote: “May 18 is supposed to be the day when the fighting over Alberta Premier Jason Kenney’s leadership stops. That’s the day we will know whether Kenney has survived the United Conservative Party’s leadership vote. On paper the outcome is simple and binary: either he wins and stays on; or he loses and moves out. However, the only thing simple is what happens should he lose. In that event, he has said he’ll step aside and open the way for a leadership race to replace him. But what happens if he wins?”

Got a news tip that you’d like us to look into? E-mail us at tips@globeandmail.com. Need to share documents securely? Reach out via SecureDrop.