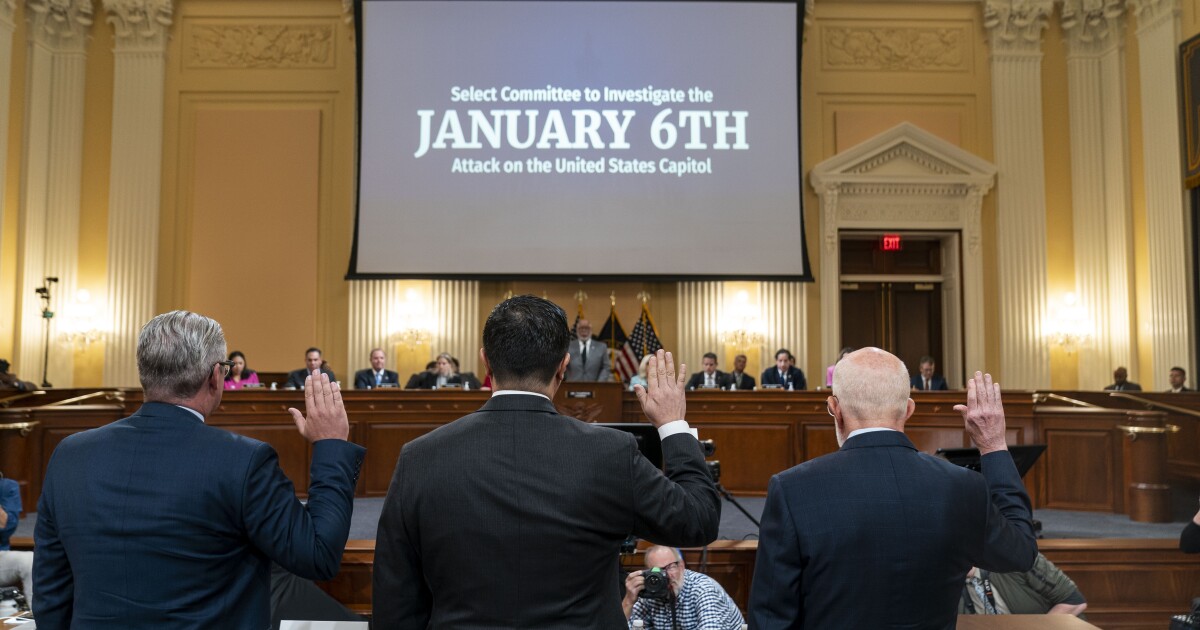 When President Trump’s supporters disrupted Congress as it certified the results of the 2020 presidential election, I wondered if the horrific moment would influence the public in the same way the Sept. 11, 2001, terror attacks did.

I was only in first grade when terrorists hijacked planes and rammed them into the Pentagon and the Twin Towers, but I still remember coming of age amid the rage and fear over that horrific day. So, when an armed mob invaded the U.S. Capitol on Jan. 6, 2021, I thought the nation may respond in a similar fashion.

At first, there was an immense bipartisan outcry. Polling at the time indicated that a majority of voters in both parties blamed President Trump — who had led a weeks-long falsehood-filled campaign to overturn the election — for inciting the insurrection.

That soon changed. Over the coming months, the horror of the day receded from our memories. More and more Republicans have embraced Trump’s “Big Lie.” More than 100 GOP primary winners backed Trump’s false voter fraud claims, according to a Washington Post analysis. Just 43% of American adults say Trump bears “a lot of” responsibility for the destruction and violence that day, according to the Pew Research Center. That figure diverges sharply along party lines, with 70% of Democrats and just 10% of Republicans placing “a lot” of the blame on Trump. It’s as if the horrors of Jan. 6 are only partially stored in the country’s collective memory.

A special congressional committee in recent days has held two hearings into the attack. I watched every minute of them. They got me wondering: Will the gripping testimony from Trump’s own advisors and relatives and the graphic never-before-seen videos change any minds, force a reckoning over the former president’s rhetoric and actions?

Hello, besties, I’m Erin B. Logan. I cover the Biden-Harris administration for the L.A. Times. Today, we’re going to talk about Jan. 6, the House Select Committee’s public hearings and the effect they may have on the public.

Get our Essential Politics newsletter

The latest news, analysis and insights from our politics teams from Sacramento to D.C.

You may occasionally receive promotional content from the Los Angeles Times.

Government proceedings don’t typically draw big audiences on television. But that was not the case for first hearing held on Thursday by the special House committee investigating the attacks. About 20 million viewers tuned in to hear from committee members and listen to witnesses recount the events of that day, according to Nielsen.

The hearing attracted more viewers than testimony of former FBI Director James B. Comey before the Senate Intelligence Committee in 2017 and 400,000 less than the confirmation hearings for Supreme Court nominee Brett M. Kavanaugh in 2018.

The House committee’s audience was likely so big for two reasons — the hearing took place during prime time, when more people were free to tune in, and a segment of the population remains deeply interested in what transpired on Jan. 6.

The committee also carefully staged that first hearing in an effort to keep and hook viewers. They played videotaped depositions, for example, from the president’s closest allies, including his daughter Ivanka, in which they testified they did not buy voter fraud claims. Former Atty. Gen. William Barr told the committee that Trump’s voter fraud claims were “bogus,” and that the president appeared to be “detached from reality” and did not seem interested in facts.

Monday’s hearing also did not disappoint. A former Trump aide testified that a “definitely intoxicated” former New York City Mayor Rudolph W. Giuliani, Trump’s campaign lawyer, urged the president to promote voter fraud claims on election night. We also learned that Trump’s team urged supporters to donate to the “official election defense fund” to help it wage legal fights related to election fraud. It raised $250 million from his supporters between election day and Jan. 6, but only a fraction of the money went to the Trump campaign’s lawyers.

It instead mostly went to organizations tied to Trump and his allies.

Such testimony and evidence is sure to changes some minds, right?

If you’re a fan of this newsletter, you’ll love our daily podcast “The Times,” hosted every weekday by columnist Gustavo Arellano, along with reporters from across our newsroom. Go beyond the headlines. Download and listen on our App, subscribe on Apple Podcasts and follow on Spotify.

Will this influence Americans?

Many people will view these hearings through their preexisting political filters, said Whit Ayres, a GOP pollster. The former president’s most ardent supporters will assume the committee is “out to make him look bad,” Ayres said. The committee’s work is likely to cement the views of those who already believed the insurrection threatened democracy, Ayres said.

Ayers said the group of voters to watch are Republicans who like the policies of Trump but have grown tired of his antics. Ayers said the committee may actually be able to reach that group because it has so far relied heavily on respected Republicans — like Barr and Ivanka Trump — to make the case that Trump was promoting baseless conspiracy theories that set the stage for the riot.

They’ve done a “very compelling job of presenting the case because they have used Trump appointees, Trump inner-circle advisors and Trump family members to make the case. It’s not just a bunch of Democrats saying bad things about Trump.”

Ayers said it will take time, however, to see if the committee’s work influences any of those voters. The presidential primaries are two years away.

A bad sign for those hoping the committee can persuade Republicans to dump Trump: Barr, despite his sharp criticism of the former president in his deposition, has left open the possibility of backing him if he wins the Republican nomination in 2024.

Enjoying this newsletter? Consider subscribing to the Los Angeles Times

Your support helps us deliver the news that matters most. Become a subscriber.

The view from Washington

—The Jan 6. committee postponed a hearing on Wednesday that was to feature Trump-era Justice Department officials, the Associated Press reported. The committee on Tuesday morning did not give a reason for the delay or provide a new date for the hearing. The next hearing, which is expected to focus on efforts to get then-Vice President Mike Pence to decline to certify the election, is scheduled for Thursday at 1 p.m. EDT

—In response to Russia’s invasion of Ukraine, Biden led a reinvigorated transatlantic alliance that has gone to great lengths, often in spite of narrower national interests, to punish Russian President Vladimir Putin and support Ukraine with tens of billions in aid, Times writers Eli Stokols and Courtney Subramanian reported. Beyond Ukraine, however, Biden has struggled to deliver on his lofty rhetoric and the promise of a reinvigorated multilateralism because he has been hamstrung by record inflation and domestic politics.

—The Supreme Court ruled Monday that immigrants being held for deportation have no right to seek release on bond, regardless of how long they may be in detention, Times writer David G. Savage reported. The justices ruled unanimously that federal immigration law calls for holding noncitizens who returned illegally to the United States and generally “removing” them within 90 days. They may be detained longer if they have pending claims, the court said, but they do not have a right under the law to go free on bond.

—The Biden administration refused to invite governments it regards as undemocratic to the Summit of the Americas, Times writer Tracy Wilkinson reported. Cuba, Nicaragua and Venezuela were among the uninvited nations, even though other countries with questionable credentials, like Brazil and Haiti, were included. Wilkinson spoke at length with Cuba’s top diplomat, Foreign Minister Bruno Rodríguez, who says the summit was a missed opportunity, with discussions on issues such as immigration, COVID-19 and climate change lacking because key countries were missing.

The view from the California campaign trail

—Mail-in votes are helping U.S. Rep. Karen Bass pull ahead of developer Rick Caruso in the primary election for Los Angeles mayor, Times writer Dakota Smith reported. Bass leads Caruso, 41% to 38%, according to results released Tuesday. Election officials are still counting mail-in ballots, and the final tally won’t be known for days or weeks. The next update from the county is expected Friday.

—U.S. Rep. Young Kim beat back a last-minute challenge from a fellow Republican and will face off with Democrat Asif Mahmood in the fall election for the seat centered in inland Orange County, Times writer Seema Mehta reported. Kim, a well-funded incumbent, appeared to be on a glide path to winning a top-two spot in the primary and moving on to the general election in November to represent the 40th Congressional District. But in the final weeks before the primary, Mission Viejo City Councilman Greg Raths appeared to gain momentum among conservatives.

—Two Democrats — Robert Garcia, the mayor of Long Beach, and state Sen. Sydney Kamlager — on Friday clinched the top spots in their respective Los Angeles and Orange County congressional races and will move on to the November general election, Mehta reported. Garcia is expected to face Republican schools trustee John Briscoe to represent a new, Latino-majority district that stretches from Southeast L.A. County cities down to Long Beach.

The view from California

—The California Legislature on Monday sent Gov. Gavin Newsom a preliminary state budget plan totaling more than $300 billion, Times writer Taryn Luna reported. The framework includes $8 billion in tax rebates but could change once a final deal is struck with Newsom. While negotiations between the governor and Democratic legislative leaders continue, the spending plan approved by the state Senate and Assembly is sufficient to meet a constitutional deadline of June 15 for lawmakers to avoid forfeiture of their paychecks.

—Los Angeles City Councilwoman Monica Rodriguez returned to work on Monday, five days after collapsing at her City Hall office, Times writer David Zahniser reported. Paramedics from the city’s Fire Department responded last week to Rodriguez’s fourth-floor office, where the councilwoman had fallen to the floor while suffering a seizure. She was taken to L.A. County-USC Medical Center but is feeling better and is having additional tests done, an aide said.

Sign up for our California Politics newsletter to get the best of The Times’ state politics reporting. And don’t forget to follow me on Twitter for updates about my adorable dog Kacey and to share pictures of your adorable furbabies with me at erin.logan@latimes.com.

Keep up with breaking news on our Politics page. And are you following us on Twitter at @latimespolitics?

Did someone forward you this? Sign up here to get Essential Politics in your inbox.

Until next time, send your comments, suggestions and news tips to politics@latimes.com.