WASHINGTON – Education Secretary Miguel Cardona told Fox News Wednesday he’s confident funding from the American Rescue Plan is being spent appropriately in response to House Republican inquiries on why much of the money remains unspent.

The first week of the school year saw an oppressive heat wave in many states, leading some schools to send students home early and revert to remote learning due to inefficient HVAC systems. Schools in Denver, Philadelphia, Baltimore, Cleveland and San Diego saw disruptions to in-person learning due to hot classrooms.

The Education Department told Fox News in a statement that climate change was to blame.

“No one is immune from the impacts of climate change, which is why the Biden administration has made it a top priority to invest in improving community resilience, making heating and cooling more efficient and affordable and reducing pollution,” a department spokesperson said.

“We continue to urge schools to use all available resources, including funds we’ve provided through the American Rescue Plan, to support a safe and healthy in-person learning environment as far too communities face record heat.”

During the pandemic, schools received over $190 billion from three COVID-19 relief packages passed between 2020 and 2021. According to the Wall Street Journal, about 93% of that money has remained unspent.

Much of that money was allocated to improve air quality in older buildings, replace HVAC systems and update to cleaner energy use.

House Republicans sent Cardona a letter late last month asking why much of that funding hadn’t been spent.

“Despite the clear harms to America’s students, we are concerned that school districts, particularly those that remained closed for over a year, have not spent the vast majority of funds made available during the pandemic,” Republicans on the Oversight Committee wrote. 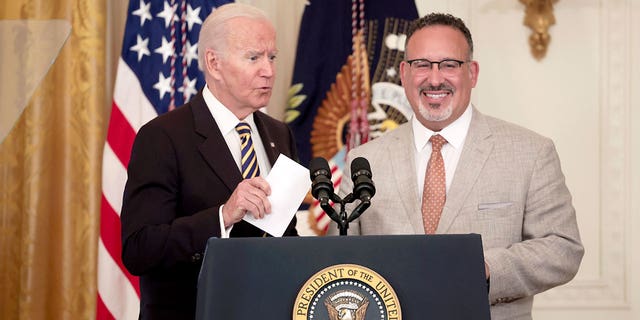 President Biden and Education Secretary Miguel Cardona at an event for the 2022 national and state teachers of the year in the East Room of the White House April 27, 2022. (Anna Moneymaker/Getty Images, File)

“Instead of allowing these funds to languish, school districts should be using the money on evidenced-based interventions to get our students back on track or even school choice. Instead, many states and local school districts are failing to act or are using the funds on ‘new technology,’ positions that are not student-facing such as a Director of School Climate and Culture, or other pet projects that will not benefit students or put them back on the path to academic success.”

The secretary pushed back on this, claiming that without the federal dollars, schools would still be closed.

“There were more students in summer school this summer than any time in our country’s history because of the American Rescue Plan,” he said. “I think, quite frankly, the headlines we’d be talking about now is which colleges are closing and which schools are not open yet because they don’t have funding.”

Cardona also talked about the massive teacher shortage issue in the U.S., saying the American Rescue Plan should be used to address teacher pay and bring in retired educators, rather than hiring unlicensed teachers or those without education degrees.

“There are solutions out there. Lowering standards is not one of them,” he said.

Districts across the nation have struggled to fill teaching positions ahead of the school year. According to the Bureau of Labor Statistics, education and health services had the largest share of job openings at just over 19%.

Cardona will join first lady Jill Biden on a back-to-school bus tour next week to showcase how schools are recovering from the pandemic, the Education Department announced.

Sally Persons is a senior producer for Fox News Channel. You can follow her on Twitter, @sapersons.