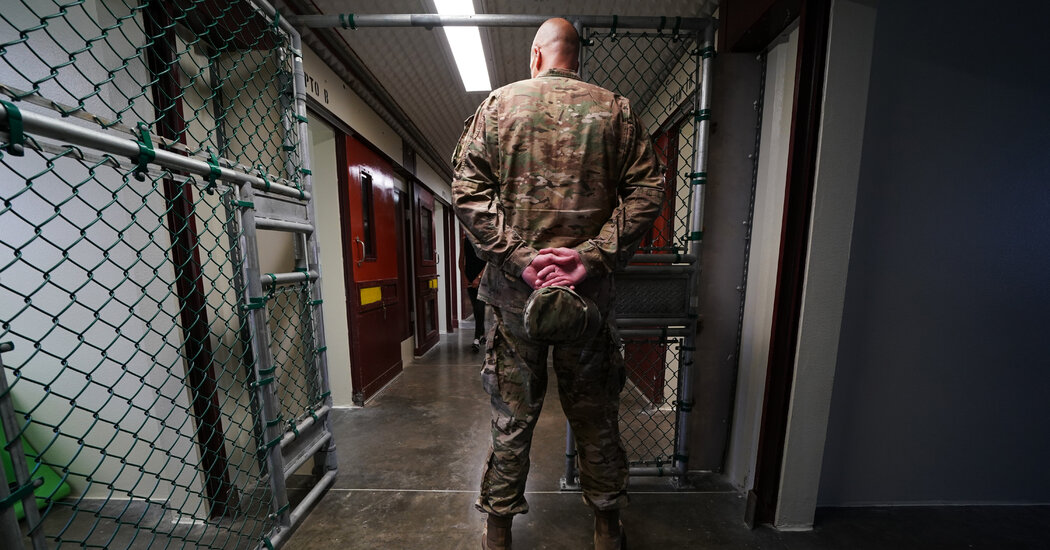 Lawyers had reached the base on the first war court flight of 2023. Then the prison canceled this week’s meetings because a former C.I.A. prisoner got sick with Covid.

Commanders at the prison at Guantánamo Bay abruptly canceled all legal meetings this week after at least two prisoners contracted the coronavirus, among them Abu Zubaydah, the first prisoner to be waterboarded by the C.I.A. in the war on terrorism, according to legal staff members.

Lawyers for prisoners accused of plotting terrorist attacks, including Sept. 11 and the 2002 Bali bombing, reached the island on Saturday on the first military commissions flight of 2023. Some managed to see their clients before the prison halted meetings on Wednesday morning, without explanation.

Military spokesmen did not respond to questions about the outbreak. But people with knowledge of operations said Abu Zubaydah, 51, whose real name is Zayn al-Abidin Muhammed Husayn, had become ill with the virus in the maximum-security prison called Camp 5.

None of the legal staff members agreed to be identified because of the classified nature of Camp 5. Since 2021, it has housed 13 prisoners who were previously held by the C.I.A., including the alleged mastermind of the Sept. 11 attacks, Khalid Shaikh Mohammed, and detainees who have never been charged, including Abu Zubaydah.

Several prisoners in Camp 5 have serious health issues, among them Abd al-Hadi al-Iraqi, a former commander of insurgents in wartime Afghanistan who was scheduled to meet with his lawyers for the first time since he underwent emergency spine surgery in November. Mr. Hadi, who says his true name is Nashwan al Tamir, is in his 60s. He pleaded guilty in a war crimes case last year, and has a pre-sentencing hearing scheduled for Feb. 13.

It was not immediately known what measures the prison took to safeguard the other men on the prisoner’s cellblock.

Abu Zubaydah was the original captive in the secret C.I.A. prison network that the Bush administration set up after the Sept. 11, 2001, attacks. He was waterboarded 83 times and has been held for more than 20 years without charge.

U.S. intelligence mistakenly profiled him as a top leader of Al Qaeda after his capture in Pakistan in 2002, and psychologists on contract to the C.I.A. created a torture program to question him with “enhanced interrogation techniques” that would be used on other “high-value detainees” in the agency’s secret overseas prison network.

His lawyer, Lt. Col. Chantell M. Higgins, declined to comment on Thursday. James R. Hodes, the lead lawyer for an Indonesian prisoner known as Hambali, said the prison was wrong to cancel all legal meetings. Mr. Hodes said that he and Mr. Hambali were fully vaccinated, and that he traveled to the base this week for his first meeting with the client this year and tested negative on arrival.

“We’ve all been vaccinated over and over,” Mr. Hodes said. “We all tested negative over and over. We make the time commitment and the effort to come down here because they decided to put a trial down here.”

“If you and I went into a federal prison or jail, we’d be able to see our clients because they’d be separated by glass,” he said. “Why can’t they make some accommodation?”

The other detainee who caught the virus was among the 20 general population prisoners in the adjacent Camp 6, but it was not possible to determine his identity. None face war crimes charges and all have been approved for repatriation or resettlement in another country, if U.S. diplomats can reach safe-transfer agreements.

Although there have been periodic reports of detainees coming down with the coronavirus, none have died from it. The U.S. Southern Command, which runs the prison, said in April 2021 that all but eight detainees at the prison had received a dose of the Covid vaccine, then stopped responding to questions about how many were fully vaccinated.