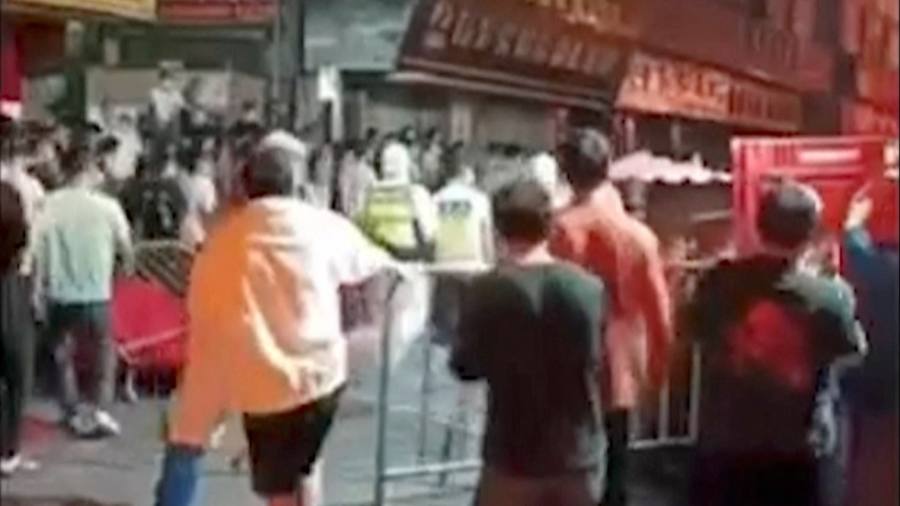 A Covid-19 outbreak in one of China’s biggest cities is on a knife edge following public protests and intense political debate among top officials over conflicting guidance from Beijing on how to handle the record surge in cases.

Regional Communist party leaders in Guangzhou, the capital of southern China’s Guangdong province with a population of 18mn, have been caught between relaxing some coronavirus measures while still trying to suppress the spread of the virus.

“Officials were still discussing the need to lock down the city last week, as the number of infected people was rising so rapidly that it was causing the government to panic,” said an adviser at the Guangdong Provincial Center for Disease Control and Prevention.

The dilemma facing provincial and city leaders is being closely watched as a critical test of President Xi Jinping’s hallmark zero-Covid policy, after Beijing signalled plans to relax some quarantine and contact-tracing requirements last week.

There is mounting uncertainty over how officials will respond to a surge in Omicron outbreaks across the world’s most populous country, including in Beijing and the south-western megacity of Chongqing. There are also questions about the financial sustainability of zero-Covid as local governments run out of funds to pay for daily mass PCR testing.

“Guangzhou’s current control approach is like an experiment, concentrating only on areas where the number of infections continues to rise and maintaining normal order in other areas,” the Guangdong CDC adviser said.

Guangzhou has reported more than 33,000 cases since October. Daily cases hit a record 8,761 on Wednesday, more than double the rate at the peak of a crippling two-month lockdown in Shanghai this year.

As of Monday, lockdowns are in place across areas responsible for more than 15 per cent of China’s gross domestic product, up from 12 per cent the previous week, according to Nomura data.

“It’s hard to execute [Beijing’s easing guidelines] while still sticking to the zero-Covid goal,” said a Guangzhou resident, referring to the city’s frequent changes in its daily Covid testing requirement.

While Guangzhou has averted a citywide lockdown, at least 9mn residents across five of the city’s 11 main districts are facing heavy-handed restrictions on movement and are required to take daily tests.

The Guangzhou government announced on Friday that it would immediately lift quarantine for close contacts of close contacts, as it attempted to fall in line with some of Beijing’s new rules.

However, conditions in Guangzhou have sparked a flurry of isolated protests, mostly focused in so-called urban villages — groups of tenements built on former farmland and housing mostly poorer workers and families.

A 35-year-old migrant worker surnamed Wang, who lives in the urban village of Shangchong in Haizhu district, told the Financial Times that a protest broke out in the district after anti-pandemic workers stopped a pregnant woman leaving a sealed-off compound.

Wang, who has been under lockdown for the past three weeks, said residents were fuming over being sealed inside their small neighbourhoods and complained about food shortages. “[The officials] charged us Rmb25 ($3.50) for a packet of instant noodles,” he said.

On Monday, officials sparked demonstrations after they failed to provide fresh groceries and medical services for residents and migrant workers who were fed up with weeks of lockdowns in the Haizhu subdistrict of Qiaonan, a small textile manufacturing hub, according to residents.

A film-maker surnamed Zhong, who is based in Guangzhou, told the FT that she had witnessed about 30 migrant workers being forced to sleep out in the street, without food or other essential supplies, since Monday. The group has been barred from returning to their homes in the urban villages of Kangle and Lujiang after being released from centralised quarantine.

A 21-year-old student surnamed Chen, who lives in one urban village in Panyu district, said residents were blocked from leaving or entering their neighbourhood on Saturday.

“A lot of people in our village were deemed to be ‘close contacts of close contacts’,” she said. “I thought the situation would get better after the new measures were announced the day before, but it turned out that they sealed off the village instead.”