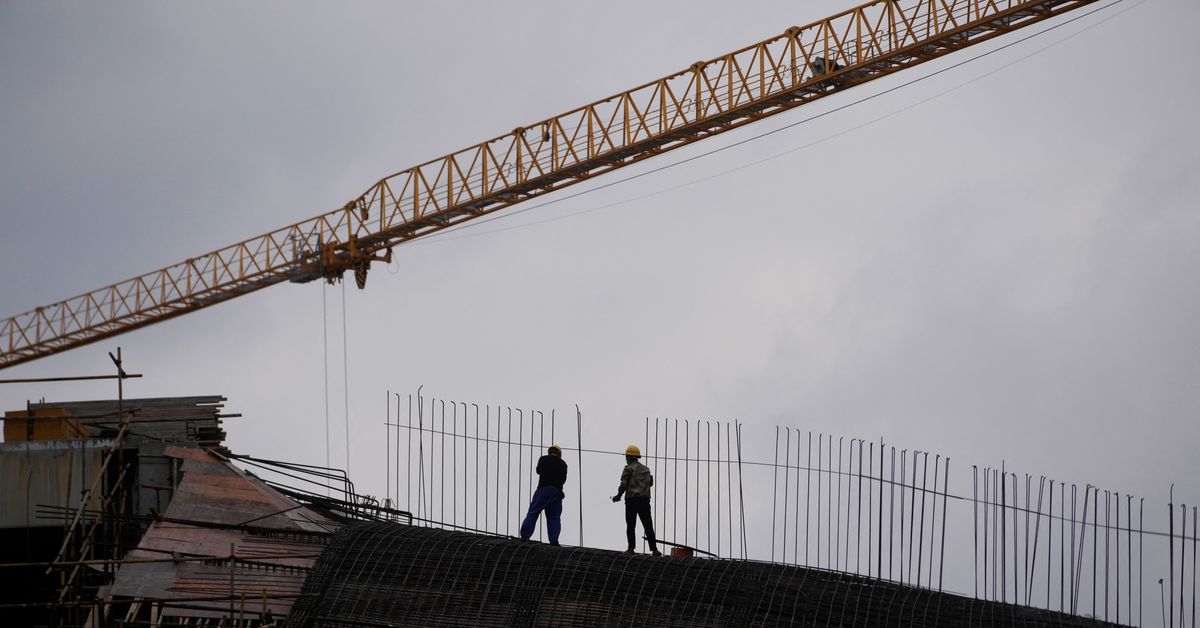 HONG KONG, Nov 14 (Reuters) – Chinese property stocks and bonds soared on Monday as the market cheered Beijing’s “most comprehensive” support measures aimed at boosting liquidity in the sector in its latest attempt to stabilise a key pillar for the world’s second-largest economy.

The package, which sources say lays out multiple financing measures for the cash-strapped industry, was hailed by analysts as a “turning point” with one even describing it as the equivalent of “soaking rain after a long drought”.

China’s property sector, which accounts for a quarter of the economy, has struggled with defaults and stalled projects, hitting market confidence and weighing on growth.

Previous efforts by policymakers to help ease the cash crunch have done little to bolster the property market.

The plan comes nearly a month after Chinese President Xi Jinping secured his third term at the helm of the ruling Communist Party at a time when the economy faces a series of headwinds including China’s zero-COVID strategy, a property slump and global recession risks.

The Hang Seng Mainland Properties Index (.HSMPI) jumped more than 13.5% to close at a two-month high, with the share prices of many Chinese property developers posting double-digit gains.

A dollar bond of defaulted Yango Group due 2023 rose 1.787 cents on the dollar to 2.712 in early trade, according to data from Duration Finance. Powerlong Real Estate’s April 2025 bond was traded at 9.275 cents, 3.055 cents higher than Friday. Their bonds also surged onshore.

Two sources told Reuters on Sunday a notice to financial institutions from the People’s Bank of China (PBOC) and the China Banking and Insurance Regulatory Commission (CBIRC) outlined 16 steps to support the property sector, including loan repayment extensions.

PBOC and CBIRC have not responded to Reuters’ requests for comment.

Citi said the package signals a major shift in regulators’ policy stance on developers, from “imposing restrictions” to “providing support”, and “rescuing projects, but not developers” to “rescuing both developers and projects”.

The notice “introduced by far the most comprehensive set of support measures for the ailing property market,” it said.

Jefferies estimated the package, together with other recent policies, would inject around 1.3 trillion yuan ($183.83 billion) credit into the property sector, largely covering private developers’ public bonds and trust products due to mature by end-2023.

Last week, the National Association of Financial Market Institutional Investors said it would widen a programme to support about 250 billion yuan worth of debt sales by private firms, including property developers.

Some investors remained cautious about the impact of the latest policy, however, as regulators have already made many attempts to revive the property sector and the macro environment remains weak amid the country’s COVID restrictions.

China’s property sector has slowed sharply this year as the government sought to restrict excessive borrowing by developers.

The clampdown has triggered falls in property sales and prices, bond defaults and the suspension of housing construction, angering homeowners which have threatened to stop mortgage payments.

“At the end of the day, the rebound of home sales is still needed for an ultimate industry comeback,” said James Wong, portfolio manager at GaoTeng Global Asset Management Ltd.

Li Gen, CEO of Beijing BG Capital Management Ltd, which specialises in credit investment, said developers that have not defaulted would benefit the most, but the help would be “less meaningful” for offshore property bonds as it remains unclear how offshore financing could be enhanced.