The Perfect Enemy | What We Learned About Ourselves During the COVID-19 Pandemic | Time
Skip to content
September 25, 2022
Read Time:10 Minute 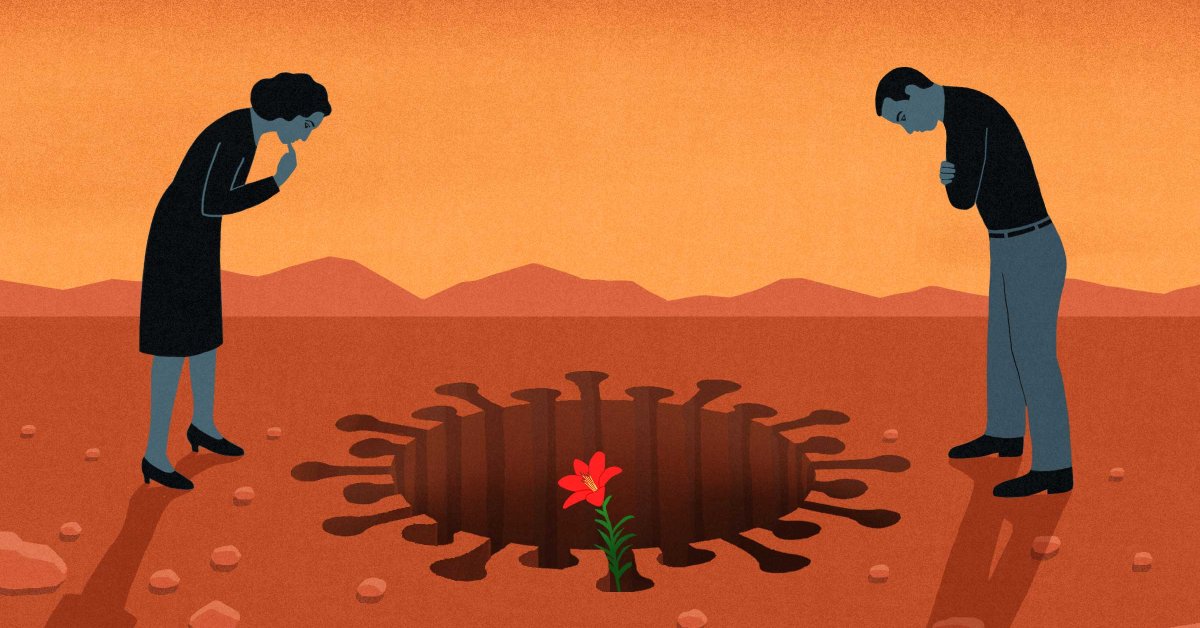 My first home had a back door that opened to a concrete patio with a giant crack down the middle. When my sister and I played, I made sure to stay on the same side of the divide as her, just in case. The 1988 film The Land Before Time was one of the first movies I ever saw, and the image of the earth splintering into pieces planted its roots in my brain. I believed that, even in my own backyard, I could easily become the tiny Triceratops separated from her family, on the other side of the chasm, as everything crumbled into chaos.

Some 30 years later, I marvel at the eerie, unexpected ways that cartoonish nightmare came to life – not just for me and my family, but for all of us. The landscape was already covered in fissures well before COVID-19 made its way across the planet, but the pandemic applied pressure, and the cracks broke wide open, separating us from each other physically and ideologically. Under the weight of the crisis, we scattered and landed on such different patches of earth we could barely see each other’s faces, even when we squinted. We disagreed viciously with each other, about how to respond, but also about what was true.

Recently, someone asked me if we’ve learned anything from the pandemic, and my first thought was a flat no. Nothing. There was a time when I thought it would be the very thing to draw us together and catapult us – as a capital “S” Society – into a kinder future. It’s surreal to remember those early days when people rallied together, sewing masks for health care workers during critical shortages and gathering on balconies in cities from Dallas to New York City to clap and sing songs like “Yellow Submarine.” It felt like a giant lightning bolt shot across the sky, and for one breath, we all saw something that had been hidden in the dark – the inherent vulnerability in being human or maybe our inescapable connectedness.

But it turns out, it was just a flash. The goodwill vanished as quickly as it appeared. A couple of years later, people feel lied to, abandoned, and all on their own. I’ve felt my own curiosity shrinking, my willingness to reach out waning, my ability to keep my hands open dwindling. I look out across the landscape and see selfishness and rage, burnt earth and so many dead bodies. Game over. We lost. And if we’ve already lost, why try?

Still, the question kept nagging me. I wondered, am I seeing the full picture? What happens when we focus not on the collective society but at one face, one story at a time? I’m not asking for a bow to minimize the suffering – a pretty flourish to put on top and make the whole thing “worth it.” Yuck. That’s not what we need. But I wondered about deep, quiet growth. The kind we feel in our bodies, relationships, homes, places of work, neighborhoods.

Like a walkie-talkie message sent to my allies on the ground, I posted a call on my Instagram. What do you see? What do you hear? What feels possible? Is there life out here? Sprouting up among the rubble? I heard human voices calling back – reports of life, personal and specific. I heard one story at a time – stories of grief and distrust, fury and disappointment. Also gratitude. Discovery. Determination.

Among the most prevalent were the stories of self-revelation. Almost as if machines were given the chance to live as humans, people described blossoming into fuller selves. They listened to their bodies’ cues, recognized their desires and comforts, tuned into their gut instincts, and honored the intuition they hadn’t realized belonged to them. Alex, a writer and fellow disabled parent, found the freedom to explore a fuller version of herself in the privacy the pandemic provided. “The way I dress, the way I love, and the way I carry myself have both shrunk and expanded,” she shared. “I don’t love myself very well with an audience.” Without the daily ritual of trying to pass as “normal” in public, Tamar, a queer mom in the Netherlands, realized she’s autistic. “I think the pandemic helped me to recognize the mask,” she wrote. “Not that unmasking is easy now. But at least I know it’s there.” In a time of widespread suffering that none of us could solve on our own, many tended to our internal wounds and misalignments, large and small, and found clarity.

Read More: A Tool for Staying Grounded in This Era of Constant Uncertainty

I wonder if this flourishing of self-awareness is at least partially responsible for the life alterations people pursued. The pandemic broke open our personal notions of work and pushed us to reevaluate things like time and money. Lucy, a disabled writer in the U.K., made the hard decision to leave her job as a journalist covering Westminster to write freelance about her beloved disability community. “This work feels important in a way nothing else has ever felt,” she wrote. “I don’t think I’d have realized this was what I should be doing without the pandemic.” And she wasn’t alone – many people changed jobs, moved, learned new skills and hobbies, became politically engaged.

Perhaps more than any other shifts, people described a significant reassessment of their relationships. They set boundaries, said no, had challenging conversations. They also reconnected, fell in love, and learned to trust. Jeanne, a quilter in Indiana, got to know relatives she wouldn’t have connected with if lockdowns hadn’t prompted weekly family Zooms. “We are all over the map as regards to our belief systems,” she emphasized, “but it is possible to love people you don’t see eye to eye with on every issue.” Anna, an anti-violence advocate in Maine, learned she could trust her new marriage: “Life was not a honeymoon. But we still chose to turn to each other with kindness and curiosity.” So many bonds forged and broken, strengthened and strained.

Instead of relying on default relationships or institutional structures, widespread recalibrations allowed for going off script and fortifying smaller communities. Mara from Idyllwild, Calif., described the tangible plan for care enacted in her town. “We started a mutual-aid group at the beginning of the pandemic,” she wrote, “and it grew so quickly before we knew it we were feeding 400 of the 4000 residents.” She didn’t pretend the conditions were ideal. In fact, she expressed immense frustration with our collective response to the pandemic. Even so, the local group rallied and continues to offer assistance to their community with help from donations and volunteers (many of whom were originally on the receiving end of support). “I’ve learned that people thrive when they feel their connection to others,” she wrote. Clare, a teacher from the U.K., voiced similar conviction as she described a giant scarf she’s woven out of ribbons, each representing a single person. The scarf is “a collection of stories, moments and wisdom we are sharing with each other,” she wrote. It now stretches well over 1,000 feet.

A few hours into reading the comments, I lay back on my bed, phone held against my chest. The room was quiet, but my internal world was lighting up with firefly flickers. What felt different? Surely part of it was receiving personal accounts of deep-rooted growth. And also, there was something to the mere act of asking and listening. Maybe it connected me to humans before battle cries. Maybe it was the chance to be in conversation with others who were also trying to understand – what is happening to us? Underneath it all, an undeniable thread remained; I saw people peering into the mess and narrating their findings onto the shared frequency. Every comment was like a flare into the sky. I’m here! And if the sky is full of flares, we aren’t alone.

I recognized my own pandemic discoveries – some minor, others massive. Like washing off thick eyeliner and mascara every night is more effort than it’s worth; I can transform the mundane into the magical with a bedsheet, a movie projector, and twinkle lights; my paralyzed body can mother an infant in ways I’d never seen modeled for me. I remembered disappointing, bewildering conversations within my own family of origin and our imperfect attempts to remain close while also seeing things so differently. I realized that every time I get the weekly invite to my virtual “Find the Mumsies” call, with a tiny group of moms living hundreds of miles apart, I’m being welcomed into a pocket of unexpected community. Even though we’ve never been in one room all together, I’ve felt an uncommon kind of solace in their now-familiar faces.

Hope is a slippery thing. I desperately want to hold onto it, but everywhere I look there are real, weighty reasons to despair. The pandemic marks a stretch on the timeline that tangles with a teetering democracy, a deteriorating planet, the loss of human rights that once felt unshakable. When the world is falling apart Land Before Time style, it can feel trite, sniffing out the beauty – useless, firing off flares to anyone looking for signs of life. But, while I’m under no delusions that if we just keep trudging forward we’ll find our own oasis of waterfalls and grassy meadows glistening in the sunshine beneath a heavenly chorus, I wonder if trivializing small acts of beauty, connection, and hope actually cuts us off from resources essential to our survival. The group of abandoned dinosaurs were keeping each other alive and making each other laugh well before they made it to their fantasy ending.

Read More: How Ice Cream Became My Own Personal Act of Resistance

After the monarch butterfly went on the endangered-species list, my friend and fellow writer Hannah Soyer sent me wildflower seeds to plant in my yard. A simple act of big hope – that I will actually plant them, that they will grow, that a monarch butterfly will receive nourishment from whatever blossoms are able to push their way through the dirt. There are so many ways that could fail. But maybe the outcome wasn’t exactly the point. Maybe hope is the dogged insistence – the stubborn defiance – to continue cultivating moments of beauty regardless. There is value in the planting apart from the harvest.

I can’t point out a single collective lesson from the pandemic. It’s hard to see any great “we.” Still, I see the faces in my moms’ group, making pancakes for their kids and popping on between strings of meetings while we try to figure out how to raise these small people in this chaotic world. I think of my friends on Instagram tending to the selves they discovered when no one was watching and the scarf of ribbons stretching the length of more than three football fields. I remember my family of three, holding hands on the way up the ramp to the library. These bits of growth and rings of support might not be loud or right on the surface, but that’s not the same thing as nothing. If we only cared about the bottom-line defeats or sweeping successes of the big picture, we’d never plant flowers at all.