The Perfect Enemy | What a Beijing Lockdown Would Mean for China and the World - TIME
Skip to content
May 26, 2022
Read Time:4 Minute

Millions of residents in Beijing are undergoing mass COVID-19 testing as the Chinese capital tries to control an outbreak and avoid a paralyzing lockdown like those currently in force in several cities in China—most notably Shanghai, where a shutdown is in its fifth week.

Fearing the long-term business impact of such draconian measures—which the authorities appear determined to keep up even in the face of the highly transmissible Omicron variant—investors have been pulling capital out of China. Global markets are also braced for continued supply-chain difficulties.

But while stricter controls remain a possibility, experts say a total lockdown of Beijing would cause less economic disruption than Shanghai’s. Although both cities contribute similar shares of China’s GDP (Beijing’s being 3.6% and Shanghai’s 3.8%), they play different economic roles, explains Gary Ng, senior economist for Asia-Pacific at investment bank Natixis.

The finance and trading hub of Shanghai is at the heart of China’s Yangtze River Delta (YRD) region, a huge conurbation that sprawls across the provinces of Zhejiang, Jiangsu, and Anhui, and makes up nearly a quarter of China’s economy. The area is home to 235 million people and many automobile, electronics and other factories that supply the rest of the world. Shanghai is also the world’s busiest container port.

On the other hand, Ng says, Beijing is part of the so-called Jing-Jin-Ji metropolitan area, an economic grouping that includes Hebei province and the Tianjin municipality, but with less than half the population of the YRD and making up only 8% of China’s economy.

Thus “for Shanghai, the restrictions add fuel to the fire of the supply chain disruption,” Ng tells TIME. But “for Beijing, the effect is more symbolic,” given that it is the seat of government and home to the headquarters of 52 companies in the Fortune Global 500—the most of any city. 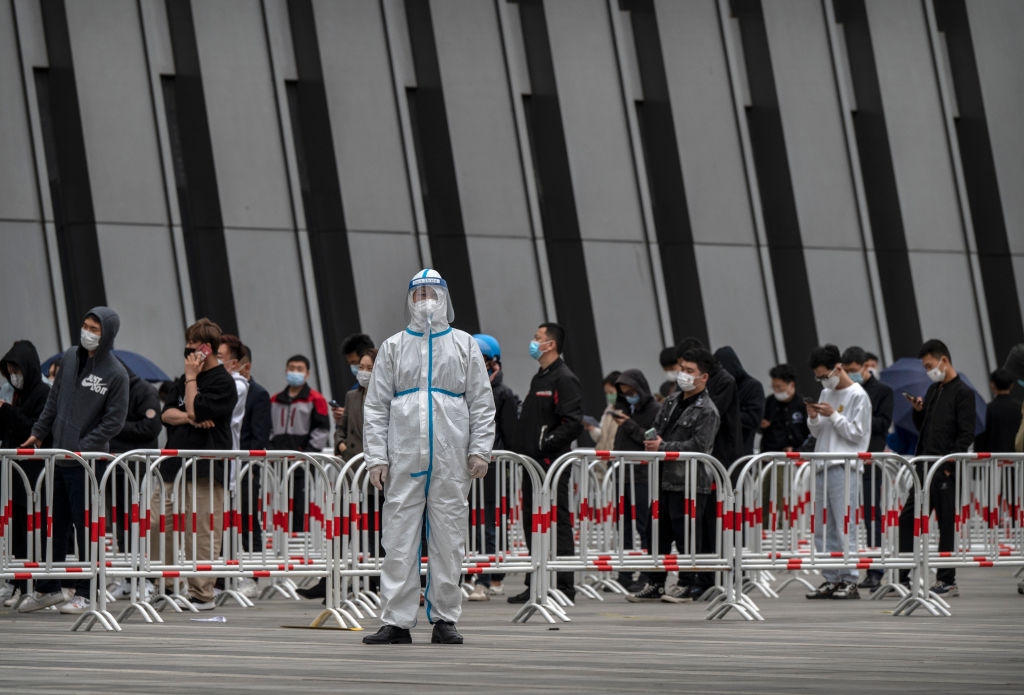 A health worker wears a protective suit as he directs people where to line up for nucleic acid tests to detect COVID-19 at a makeshift testing site in the Central Business District in Chaoyang on April 27, 2022 in Beijing, China.
Kevin Frayer/Getty Images

Nevertheless, meeting the 5.5% annual economic growth target will be more difficult if Beijing goes into lockdown, especially as China faces other headwinds, including the global disruptions of the Ukraine war and the impact of U.S. inflation on demand for Chinese goods. In a bid to stimulate the economy, President Xi Jinping called Tuesday for “all-out efforts” to expand infrastructure construction, the official Xinhua news agency reported.

China’s leader has much riding on the success of the country’s pandemic measures. This fall, the Chinese Communist Party (CCP) is slated to hold its 20th National Congress, where Xi is expected to secure an unprecedented third term as leader.

Xi and the party have presented China’s zero-COVID strategy as a humanitarian response to the coronavirus because of its emphasis on saving lives over saving profits. To be sure, it has been a great success in terms of minimizing mortality. The world’s most populous nation has recorded fewer than 5,000 COVID-19 fatalities compared to the U.S. death toll of nearly a million.

But the Chinese people have paid a high price with curbs on their freedoms. Health-tracking apps govern many aspects of life, including access to transport and public facilities. Compulsory testing and onerous queuing are a fact of everyday life. During the most stringent forms of lockdowns, people are not allowed to leave their homes for weeks on end—depending for essential supplies on volunteers or erratic delivery services—or they may be ordered into makeshift isolation centers. Parents have been separated from children.

The Shanghai lockdown, in particular, has been a grueling test of patience for the city’s 25 million inhabitants, with reports of tense confrontations with authorities and even rare protests. But the CCP will not allow anyone to describe the measure as a failure, says Steve Tsang, director of the SOAS China Institute in London.

“A full lockdown in Beijing with similar level of mismanagement in Shanghai will be seen by many outside of China as a demonstration of failure but it will not be allowed to be so portrayed in China,” Tsang tells TIME.

According to Huang Tianlei, a research fellow at the Peterson Institute for International Economics in Washington D.C., an uncontrolled coronavirus outbreak will “overwhelm the country’s weak medical system”—especially, he says, “in lower-tier cities and rural areas where there aren’t enough medical resources.” Millions of China’s unvaccinated elderly could fall seriously ill or lose their lives.

The blow to Xi from such an outcome will be indirect, but it would be poor optics in a politically sensitive year and that matters to the stability of the regime. Its commitment to zero-COVID policies will therefore be unwavering, and any economic disruptions shrugged off.

“There will be anger,” says Tsang at SOAS. “But it will largely be suppressed.”