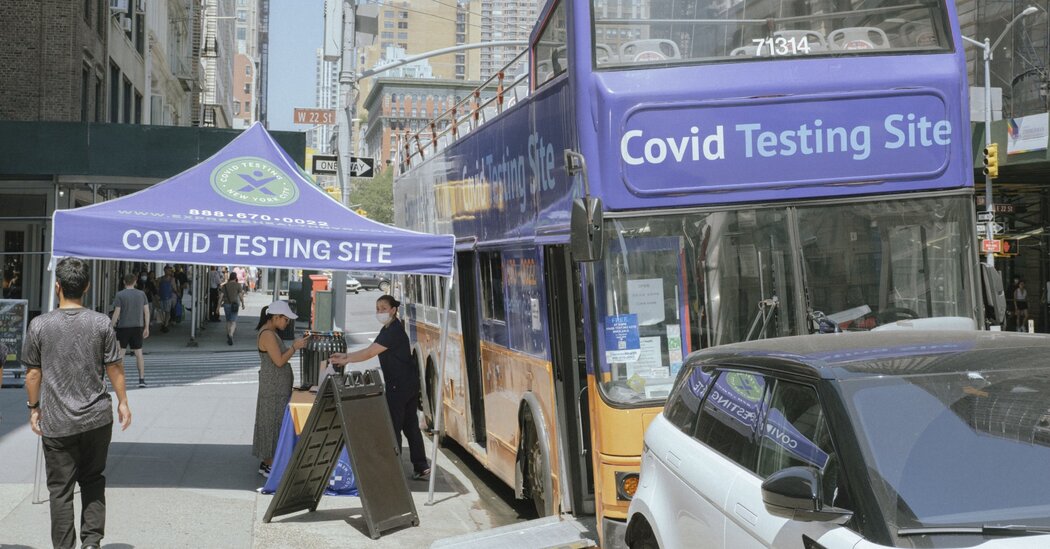 After a rise in known infections this spring, new coronavirus cases in the United States have leveled off in recent weeks, even as hospitalizations continue to inch upward and new Omicron subvariants rapidly circulate.

The country is recording just over 105,000 new coronavirus cases a day, on average, a rate that has more or less held steady over the last month, according to a New York Times database.

That figure is sure to be an undercount, as more people have turned to at-home testing, the results of which often go unreported. But other indicators are also showing signs of steadying: The number of patients hospitalized with the virus is still growing, but doing so slowly, with the average hovering for most of this week around 29,000. Deaths have stayed below 400 a day for several weeks.

With key indicators far below their Omicron winter peaks, longstanding public health orders continue to be lifted. In one sign of recent change, travelers flying to the United States no longer need to provide a negative test result. Dr. Rochelle Walensky, the director of the Centers for Disease Control and Prevention, explained the decision last week in part by pointing to booster shots and how Omicron had “generally caused less severe disease among those who are infected.”

“We seem to be plateauing right now,” said Jennifer Nuzzo, a professor of epidemiology and the inaugural director of the Pandemic Center at Brown University’s School of Public Health, who is monitoring the spread of two new Omicron subvariants, BA.4 and BA.5, which have been gaining ground in the United States.

The current outlook varies from place to place.

But in New York City, where cases slowed recently, Mayor Eric Adams, who had previously lifted a mask requirement in schools, announced last week that masks are now optional for toddlers in day care and preschool.

Children younger than 5 are the last remaining group not yet eligible to be vaccinated, but that could change as federal officials consider whether to authorize vaccines for children as young as 6 months.

If authorized, the option could offer relief for many families, who have been juggling day care closures and lingering fears that their children could be among the few who develop a serious case of Covid-19.

“The biggest impact is you take away the rare chance of something bad happening,” said Dr. Paul Offit, director of the Vaccine Education Center at Children’s Hospital of Philadelphia, who is part of an advisory panel to the Food and Drug Administration.

But even if a vaccine is authorized for the final age group — roughly 18 million children younger than 5 — experts do not expect it to change the overall trajectory of the pandemic.

Many children have already been infected with the virus — by one estimate, as many as 75 percent as of February. And vaccine uptake among children overall has been low.

Federal officials have required rigorous testing to authorize vaccines as safe and effective, but some parents have expressed hesitancy as they weigh the newness of the vaccine against the risk from the virus. According to a Kaiser Family Foundation survey published last month, just 18 percent of parents with children under the age of 5 said they were eager to vaccinate their children right away.

“It’s not like this is finally going to end the pandemic,” Dr. Nuzzo said of a vaccine for young children. But should the option become available, it could offer more flexibility for families, day cares and preschools. “I do think what will be really great is to help these kids go back to having normal lives.”

What’s the risk of getting COVID outside? Here’s why new variants may have changed the answer