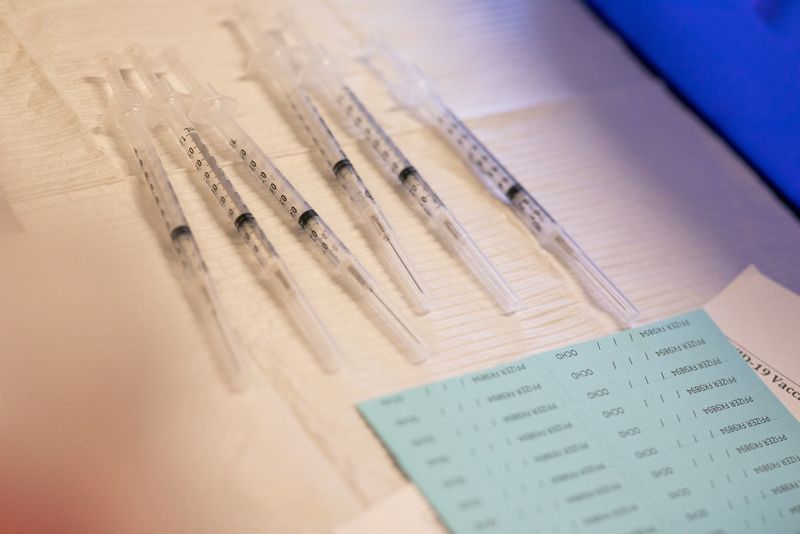 (Reuters) -Updated COVID-19 boosters offer increased protection against new coronavirus subvariants in people who have previously received up to four doses of the older vaccine, based on data from the first study to assess how the retooled shots are faring in the real world, U.S. officials said on Tuesday.

The findings support results from company studies showing that their updated shots produced higher antibody responses against the BA.4/B.5 subvariants than their original shots after one month.

The study of more than 360,000 people compared updated boosters from Pfizer/BioNTech and Moderna that target both the original virus and Omicron BA.4/5 coronavirus subvariants with their earlier COVID-19 vaccines. The data was published in the U.S. Centers for Disease Control and Prevention’s Morbidity and Mortality Weekly Report.

The new shots were introduced in the United States in September after they were authorized based on human trials of vaccines that incorporated an earlier Omicron variant, as well as data on the BA.4/BA.5 boosters from studies in labs and animals.

The latest study showed that the vaccines provided greater benefit to those ages 18-49 than for older adults.

When given eight months or more after a prior COVID shot, relative vaccine effectiveness of the new boosters compared with the original shots in preventing symptomatic disease was 56% among people aged 18–49 years, 48% among those 50–64 years, and 43% among persons aged 65 years and older, the study showed.

Vaccine effectiveness dropped to a range of 28%-31% when the boosters were given just two to three months after previous vaccination.

The authors of the study noted several limitations including that participants may not have accurately recalled their vaccination status, previous infection history, and underlying medical conditions, and that low acceptance of the new boosters could have biased the results.

So far, around 35 million updated boosters have been administered across the United States, representing around 10% of the total population, U.S. data show.

In addition, the results may not be generalizable to future variants, as the dominant variants keep evolving, the authors said.

In just the last two months, the BQ.1 and BQ.1.1 subvariants have become the dominant versions of the coronavirus in the United States, overtaking the BA.5 subvariant of Omicron targeted by the updated boosters.

(Reporting by Leroy Leo in Bengaluru and Julie Steenhuysen in Chicago; Editing by Bernadette Baum and Bill Berkrot)