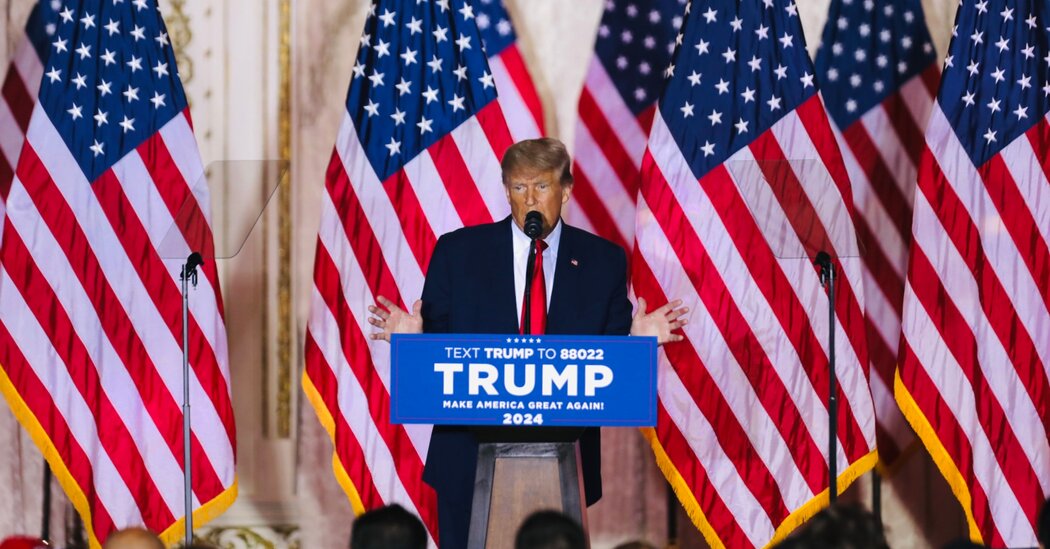 PALM BEACH, Fla. — Donald J. Trump, whose historically divisive presidency shook the pillars of the country’s democratic institutions, on Tuesday night declared his intention to seek the White House again in 2024, ignoring the appeals of Republicans who warn that his continued influence on the party is largely to blame for its weaker-than-expected showing in the midterm elections.

His unusually early announcement was motivated in part by a calculation that a formal candidacy may help shield him from multiple investigations into his attempts to cling to power after his 2020 defeat.

The decision, which came as votes were still being counted in congressional contests that will determine the balance of power in the House, confronts a frazzled and polarized nation — its social fabric already stressed by forces that the Trump era unleashed and supercharged — with a reboot of the nonstop political reality show that the Biden presidency had promised to cancel.

Mr. Trump’s haste to become a candidate again carries political risk and financial encumbrance, and some advisers had pushed for him to hold off. But he has been eager to announce a campaign since this summer, nearly did so at a rally last week on election eve and told some advisers that he was concerned another delay would signal weakness.

The former president’s view, according to friends and advisers, is that a formal White House bid will bolster his claims that the multiple state and federal investigations he faces are all politically motivated.

Indeed, he hopes that a candidacy could give pause to prosecutors who may be considering criminal charges, particularly in connection with the Justice Department’s investigation into highly sensitive documents that Mr. Trump held at his private Mar-a-Lago club in Florida, according to the friends and advisers, who insisted on anonymity to discuss private conversations.

It was at Mar-a-Lago, the scene of that possible crime, that Mr. Trump on Tuesday declared his determination to reclaim the presidency.

“With victory, we will again build the greatest economy ever,” he said. “It will take place quickly.”

Even though the twice-impeached former president’s dominance of Republican politics has led to three disappointing elections in a row for the party, he immediately claims the mantle of the G.O.P. front-runner, thanks to a devoted, core following of millions of supporters who have repeatedly proved their loyalty to him.

One reason for his haste was to blunt the momentum gathering behind Gov. Ron DeSantis of Florida, whose runaway re-election victory last week astonished many inside the party. Mr. DeSantis was already the preferred presidential nominee among a sizable number of Republican donors and elected officials who have tired of Mr. Trump’s control, his continual controversies and his endless harping about 2020.

Still, Mr. Trump’s rush to announce a bid also carries the risk of backfiring. Conservative news outlets, including Fox News and others belonging to the Murdoch empire, have turned against him. The New York Post mocked him on its cover last week as “Trumpty Dumpty,” a day after lionizing the much younger Mr. DeSantis as “DeFuture.” And a Wall Street Journal editorial on Monday denounced him as “the man most likely to produce a G.O.P. loss and total power for the progressive left.”

Some advisers privately warned against an announcement, saying that “Trump fatigue” had contributed to the 2020 defeat, and that voters needed a break after the contentious 2022 election season. Over the weekend, Senator Lindsey Graham of South Carolina told several people that he had visited Mr. Trump in Florida and asked that he delay the announcement.

More broadly, Mr. Trump’s insistence on another campaign has set off a roiling debate among Republicans over whether the party can thrive with him as its leader — and, if not, how it can effectuate a divorce. Many party leaders believe last week’s failures showed the folly of Mr. Trump’s obsession with his false claims that he won the 2020 presidential contest.

His handpicked candidates lost close races across the country, including a crushing blow in Pennsylvania, where Democrats flipped a Senate seat and helped ensure that Republicans would remain in the minority for the next two years. (A runoff election in Georgia on Dec. 6 could give Democrats a 51st seat. It remains unclear whether Herschel Walker, the former football star whom Mr. Trump urged to run as a Republican, will want Mr. Trump to campaign with him.)

Mr. Trump endorsed five candidates in the nation’s most competitive House races, according to ratings by the nonpartisan Cook Political Report. All five lost.

He was also heavily involved in contests determining who would run the election apparatus in critical states before the 2024 presidential election. The result: Every election denier who sought to become the top election official in a battleground state was defeated.

Mr. Trump and his team raced to do damage control and project strength leading up to Tuesday. They rounded up endorsements from Republican leaders and invited all 168 members of the Republican National Committee to the Mar-a-Lago event, although many were reluctant to attend because of party rules that require neutrality in primary contests.

But he has virtually no campaign team in place. No campaign manager or communications director has been chosen, and many of the arrangements for Tuesday were made by Jason Miller, a longtime adviser who now is the chief executive of Gettr, a social media company.

The former president is also now legally barred from working with Tony Fabrizio, his veteran pollster, and Taylor Budowich, a key adviser for much of the past year. Both men will work for Mr. Trump’s super PAC; under campaign finance laws, they cannot coordinate with an active candidate.

Mr. Trump’s new presidential campaign will begin as he confronts two Justice Department investigations: one into the sensitive documents held at Mar-a-Lago, and another into his actions and those taken by his allies and supporters to keep him in power after his 2020 defeat.

In addition, prosecutors in Fulton County, Ga., have convened a grand jury to investigate efforts by Mr. Trump and his team to overturn the 2020 results in Georgia. A congressional committee has spent months amassing information and testimony about his conduct in the run-up to the attack on the Capitol on Jan. 6, 2021. A civil investigation into his family business, the Trump Organization, led by New York’s attorney general, Letitia James, resulted in a lawsuit that ensnared Mr. Trump’s children. And the Manhattan district attorney, Alvin Bragg, is prosecuting Mr. Trump’s company on charges of tax fraud in a trial underway in Manhattan.

Mr. Trump’s candidacy could also cut off a stream of Republican Party money that he has used to pay for his personal legal bills. The chairwoman of the Republican National Committee, Ronna McDaniel, has said that the committee will cease paying Mr. Trump’s legal bills once he becomes a candidate.

In recent history, no successful nonincumbent presidential candidate has opened a White House bid so long before the election. But Mr. Trump’s propensity for the unconventional has defined his political style, and it propelled his successful campaign as a first-time candidate in 2016.

Most presidential candidates are reluctant to announce campaigns this early because of strict, $2,900-per-person donation caps during the primaries. For Mr. Trump, that means he can tap his largest donors only once, until the general election race begins in 2024, to aid his candidacy directly.

Mr. Trump’s announcement also means he is now ineligible to use any of the roughly $100 million spread across three different political accounts, as of late October, to support his presidential run directly.

Still, those groups can provide indirect support, such as TV advertisements or political events that advance issues that align with the former president’s agenda.

But Mr. Trump continues to amass staggering amounts of cash from small donations online, a sign of his broad grass-roots support and a key data point for his advisers who remain unconcerned about paying for an extended presidential campaign.

Another potential challenge for Mr. Trump will be whether he can articulate precisely why he wants to be president. His team identified that as a significant reason he lost re-election.

As president, Mr. Trump had his administration advance policies aimed at limiting immigration, confronting China and improving the economy — all issues that powered his unlikely election in 2016. He enjoyed historic drops in the unemployment rate, soaring stock-market returns, increases in median household incomes and declines in poverty during his first three years in the White House.

He spent his last year in office enmeshed in the coronavirus pandemic and in a campaign that was largely a referendum on his response to the contagion.

He repeatedly downplayed the severity of a disease that killed hundreds of thousands of Americans and crippled the U.S. economy, even as his administration backed the rapid development of vaccines that paid off after he left office.

He was also impeached twice, doubling the number of presidential impeachments throughout the nation’s history.

House Democrats formally called for his removal from office after he pressed Ukraine in 2019 to investigate Joseph R. Biden Jr., making Mr. Trump the third president to be impeached.

He was impeached an unprecedented second time on charges that he incited the Jan. 6 attack. In both instances, Mr. Trump was acquitted in the Senate as Democrats failed to persuade enough Republicans to vote for conviction.

Only once in U.S. history has a president won a second term on a second try. That was in 1892 when Grover Cleveland, a New York Democrat who had been ousted from the White House four years earlier by Benjamin Harrison, an Indiana Republican, returned the favor in a rematch.

Among the nine other presidents ousted after one term, only one ever ran again: Martin Van Buren, who lost the Democratic nomination in 1844 and unsuccessfully ran four years later as the Free Soil Party’s nominee.