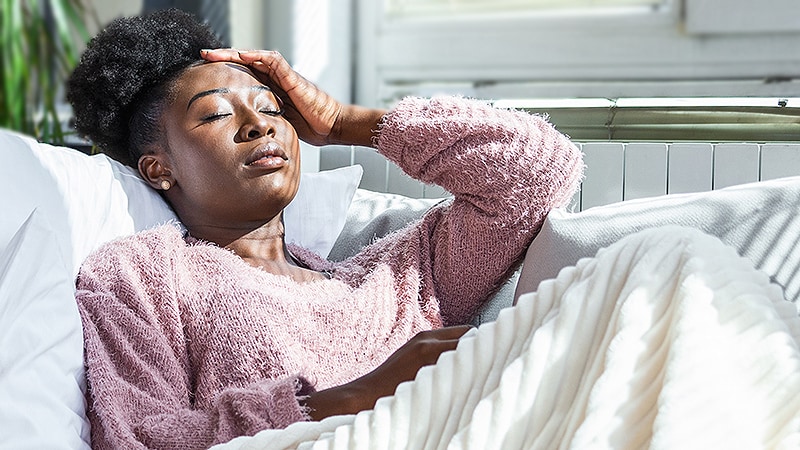 A variety of treatments, most already commercially available, are under investigation for treating the constellation of overlapping symptoms associated with myalgic encephalomyelitis/chronic fatigue syndrome (ME/CFS), “long COVID,” and dysautonomia.

At the virtual annual meeting of the International Association for Chronic Fatigue Syndrome/Myalgic Encephalomyelitis (IACFS/ME), speakers presented data for a variety of approaches to ease symptoms common across post-viral conditions, such as extreme fatigue, post-exertional malaise (“crash”), cognitive dysfunction (“brain fog”), orthostatic intolerance including postural orthostatic tachycardia syndrome (POTS), and chronic pain. Most of the modalities are already commercially available for other indications, although some are costly and not covered by payers for these conditions.

“Both post-acute COVID-19 syndrome and ME/CFS are forms of post-infectious viral syndromes and they have overlapping symptoms. … In the past, patients were told ‘you have chronic fatigue syndrome but there’s nothing we can do for it.’ That certainly is not the case. There aren’t cures, but there are many management techniques to improve symptoms,” Charles W. Lapp, MD, medical director of the Hunter-Hopkins Center, Charlotte, North Carolina, told Medscape Medical News in an interview.

A current mainstay of treatment for ME/CFS — including that triggered by COVID-19 — is activity pacing, in which patients learn to stay within their “energy envelopes” in order to avoid post-exertional malaise, a worsening of all symptoms with exertion. The use of “graded exercise” is no longer recommended, per UK and US guidelines.

Data for the following approaches were presented at the IACFS/ME conference:

Pyridostigmine, an acetylcholinesterase inhibitor, is approved for the treatment of muscle weakness resulting from myasthenia gravis and is available in generic form. It has previously been shown to produce significant improvement in both symptom burden and heart rate response in POTS.

At the IACFS/ME conference, David M. Systrom, MD, a pulmonary and critical care medicine specialist at Brigham and Women’s Hospital and director of the Massachusetts General Hospital Cardiopulmonary laboratory, Boston, summarized his group’s study in patients with ME/CFS using pyridostigmine as both a potential treatment for improving exercise capacity and a proof-of-concept that neurovascular dysregulation underlies exertional intolerance in the condition.

A total of 45 patients were randomized to 60 mg oral pyridostigmine or placebo after an invasive cardiopulmonary exercise test, and a second test performed 50 minutes later. Peak VO2 increased after pyridostigmine but decreased after placebo (+13.3 mL/min vs -40.2 mL/min, P < .05). Cardiac output and right atrial pressure were also significantly improved with pyridostigmine and worse with placebo.

Asked to comment, Lapp said, “We’ve used Mestinon for years because it helps with POTS and also with neurally mediated hypotension. Systrom is taking it to a new level because he’s shown that it increases preload to the heart.” However, he noted that it’s unclear whether the drug will help patients who don’t have POTS specifically. On the other hand, patients rarely experience side effects from the drug.

David Lyons Kaufman, MD, of the Center for Complex Diseases, Mountain View, California, summarized data from his group’s recently published open-label, non-randomized, “proof-of-concept” study on use of the commercially available nutritional supplement anhydrous enol-oxaloacetate for treating mental and physical fatigue in 76 patients with longstanding ME/CFS and 43 with long-COVID fatigue.

Oxaloacetate is a major step in the Krebs cycle within the mitochondria that are depleted in patients with ME/CFS. It is also an energy metabolite that has multiple effects in cells and mitochondria, Kaufman explained.

Doses ranging from 500 mg twice daily up to 1000 mg three times a day were given for six weeks. Up to 33% of the patients with ME/CFS and up to 46.8% of the long-COVID group achieved clinical efficacy as measured by physical and mental fatigue scores, compared with just 5.9% of historical ME/CFS controls. All doses showed highly significant improvements.

The only adverse effects were occasional dyspepsia, which was avoided by taking the supplement with food, and insomnia, resolved by having them dose at breakfast and lunch, Kaufman said.

“We have a healthcare crisis with long COVID, and we’ve had this smoldering crisis with ME/CFS for decades that’s never been addressed. ME/CFS and long COVID, if not identical, are certainly overlapping. … We have to pursue these translational medicine pilot studies as rapidly as possible,” Kaufman remarked.

Lapp told Medscape Medical News that it makes sense to use constituents of the Krebs cycle to improve mitochondrial function, but the problem with oxaloacetate is its cost. Kaufman mentioned that based on the preliminary trial, the therapeutic “sweet spot” appeared to be 1000 mg twice daily. The manufacturer’s website lists the price for a single bottle of thirty 250-mg capsules at $49, or $42 if purchased via a monthly subscription.

“It’s a benign drug, and it’s over the counter. I would give it to any patient who’s got a big wallet,” Lapp quipped, adding, “If they’ve got the money, they can order it tonight.”

Inspiritol is an investigational “nebulized, inhaled, multi-mechanism medication designed to treat the major symptoms of respiratory distress with antioxidant, anti-inflammatory, and broad spectrum antiviral and antibacterial properties. Inspiritol is composed of both endogenously produced and naturally occurring, well tolerated biochemicals,” according to the company website.

The hypothesis, Liisa K. Selin, MD, PhD, professor of pathology at the University of Massachusetts Chan Medical School, Worcester, said at the meeting, is that “ME/CFS and long COVID-19 result from an aberrant response to an immunological trigger like infection, which results in a permanently dysregulated immune system as a result of overactivation of CD8 T cells and subsequent exhaustion.”

Inspiritol, containing five antioxidants, acts as an immune modulator to reverse the CD8 T cell exhaustion and improve symptoms. Administration by inhaler delivers it directly to the brain from the lung. It was originally designed for use in chronic obstructive pulmonary disease and asthma and has shown efficacy for acute COVID-19, Selin said.

In a preliminary study, four patients with ME/CFS and five with long COVID have been treated with Inspiritol for 2-15 months, and all have self-reported improved symptoms. Cough has been the only reported side effect.

The company is pursuing an Investigational New Drug Application for the product with the U.S. Food and Drug Administration and has several patents pending. Lapp called Inspiritol “very interesting,” and said that reversal of CD8 “exhaustion” also would appear to be a promising approach. However, he noted, “the problem is that we don’t know what’s in it.”

Injection of local anesthetic near the stellate ganglion to block activity of the entire cervical sympathetic chain has been used for nearly a century to treat a variety of sympathetically mediated conditions, including complex regional pain syndrome (CRPS), shingles, and phantom limb pain. More recently, it has been used in a variety of other conditions, including post-traumatic stress disorder, Raynaud’s disease, menopausal hot flashes, and hyperhidrosis.

Deborah Duricka, PhD, also with Neuroversion, presented results from a now-published case series of 11 patients with long COVID who underwent stellate ganglion block by a board-certified anesthesiologist, first on one side at the level of C6, then on the contralateral side the following day.

The hypothetical mechanism, she said, is that “sympathetic block prevents sympathetically driven vasoconstriction in carotid and vertebral arteries.”

Liu presented another case series of five patients with ME/CFS who underwent the procedure with ultrasound guidance, again on one side and the other side the next day. All had upper-limb autonomic issues such as Raynaud’s and/or neuropathic pain that had been refractory to more conventional treatments.

All five patients reported improvements in symptoms of ME/CFS, including energy level, cognition, pain, and post-exertional malaise. One patient reported “feeling well for the first time in decades.” However, that patient relapsed after a mild viral illness 3.5 months after treatment. Some of the patients have required further treatments.

Lapp commented that although the procedure is generally safe when performed by an experienced clinician, “Any time you do an injection like that, there’s a high risk that you could nick an artery or a vein or hit an essential nerve in the neck. That’s why it has to be done under fluoroscopy or ultrasound.”

He said he’s had a few patients undergo the procedure, mostly for CRPS, and they seem to have benefitted from it. “It might increase cerebral blood flow and preload to the heart, so it might decrease ME/CFS symptoms and help with POTS as well,” he commented.

Nonetheless, Lapp said he wouldn’t consider stellate ganglion block as first-line treatment for ME/CFS or long COVID. “I think it would be for the treatment-resistant patient, when you’ve gone through all the treatments that we know and addressed all the comorbidities and they’re still not getting better.”

But, he added, it is a standard procedure. “Any pain clinic can do a stellate block.”

Nicola Clague-Baker, PhD, a physiotherapist at the University of Liverpool, Liverpool, United Kingdom, presented findings from an international survey of people with ME/CFS regarding their experience with transcutaneous auricular vagus nerve stimulation (taVNS) to manage their autonomic symptoms. The technique involves stimulation of the autonomic nervous system via the vagus nerve using electrodes applied to part of the ear. The theory is that the technique stimulates the parasympathetic nervous system and improves autonomic balance.

Two small previous trials showing benefit of vagus nerve stimulation for people with ME/CFS used more invasive and less comfortable methods of applying the stimulation rather than to the ear, Clague-Baker and colleagues note in a poster. It has also been used successfully in treating POTS, another conference speaker noted.

A total of 131 people with ME/CFS (called simply “ME” in the UK) responded to a survey advertised on social media and websites. The majority (60%) were from the UK while the rest were from Europe, Australia, and North America. Most were female, and slightly more than half had lived with ME for 10 or more years.

The majority (72%) were still using taVNS, while 28% had stopped using it. Only 9% had used the modality for longer than a year. Respondents identified more than 30 benefits in symptoms and activities, with improvements in post-exertional malaise (39%) and brain fog (37%) being the most common. One reported significant reduction in constipation.

However, respondents also mentioned more than 20 short- and long-term negatives, including headaches (15%) and long-term irritation at the site (9%). One participant reported a “big improvement in neuropathic pain, but not so much for muscles and joints.”

Overall, 80% reported that they would continue using taVNS and 67% said they would recommend it to others with ME, and 56% said that the system was mildly to very beneficial.

Lapp noted that several types of transcutaneous electrical nerve stimulation units with ear clips are sold online, and he’s seen them work well for migraine treatment. However, he cautioned that some patients have had side effects from the treatment, such as headaches and dizziness. “It’s putting an electrical current through your brain. In my mind, it’s another last-ditch measure.”