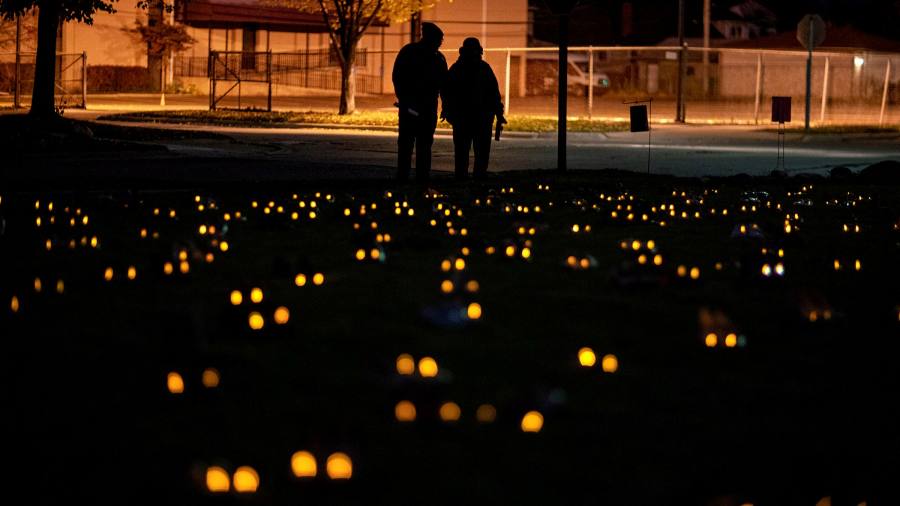 At some point in the coming weeks, the total number of US deaths from Covid-19 will reach 1mn. For reference, the American Civil War took twice as long to kill three quarters as many people, and that figure is an upward revision on older estimates. All the nation’s external wars have together claimed around 700,000 US personnel over almost 250 years.

A million: even allowing that America has a larger population now than in, say, 1945, the size and speed of the loss are eerie. And so is its impact on domestic politics. For there isn’t much of one.

At the turn of 2020, the two big parties were headed by Joe Biden, who had led the Democratic primaries for more than a year, and the Republican then-president Donald Trump. The same men are the betting markets’ favourites to contest the 2024 election. The pandemic has not lastingly toppled established figures (as Vietnam did Lyndon Johnson) or elevated new ones (as the second world war did Dwight Eisenhower). Each party’s leaders on Capitol Hill are the same, even as two of them wade into their eighties.

The weird stability of politics goes beyond the names and faces to the things they do. The vast fiscal relief in the first month of the lockdown was agreed on promisingly bipartisan terms. Washington is now as divided and rancorous as before. The contents of that bill seemed to augur a period of social democratic government. Now, as his Build Back Better package languishes in Congress, the Biden-as-Franklin-Roosevelt theme of last spring is mortifying to recall.

Even the electoral rhythm of the day is familiar. If Biden loses Congress at his first midterm elections in November, he will just be emulating Barack Obama in 2010 and Bill Clinton in 1994. Economic worries, an abortion row: there is very little about the manner and substance of US politics that a visitor from a generation ago wouldn’t recognise.

The lost million will leave a mark, but it will be in the world of private grief, where 210,000 children have lost a primary caregiver. In the civic realm, there has been no electoral realignment, no intellectual rupture of the kind that followed the Opec oil crisis of the early 1970s, no passing of the torch to a new political generation. An independent inquiry into the handling and origins of the pandemic is on the way, but it will struggle for attention in a country where 3 per cent of voters name Covid as the top issue.

And so we are left with — what? — a higher profile for Florida governor Ron DeSantis as the nearest thing the pandemic has to a direct political legacy. (Inflation has too many parents to be pinned on Covid alone.) And even that owes to his libertarian line on vaccine mandates and lockdowns, not to the loss of life itself or any prevention thereof. In fact, it is hard to think of a comparably grave event in US history that has left politics so untouched.

This baffling continuity would be easier to understand if, from the start of the pandemic, the public had been tolerant of heavy losses. But the opposite was true. Polls showed that voters wanted the state to err on the side of caution: the preservation of life rather than of normal life. They worried that the first round of restrictions would be eased too quickly. It is hard to know which would have struck them as more fantastical two springtimes ago: the eventual death toll, or the lack of political disruption that it has set in train.

Two explanations stand out. The darker one, hardly unique to America, is ageism. The death of so many old people was never going to turn politics on its head as the loss of teenage conscripts on distant soil tends to.

The second is more encouraging. In an age of bottomless cynicism, people believe the system did about as well as it could have, given its inexperience of pandemics and the vagaries of free societies. This is not a soft-headed view. The speed with which Washington delivered cheques and science delivered marvels (Paxlovid, Pfizer’s treatment pill, is coming to a chemist near you) remains dazzling.

The trouble is, to do better next time, a system needs more than all the technical knowledge and practice it has gained this time. It needs a political incentive to change. The felling of careers and shaking of institutions that follow a national crisis is not (or not just) vindictive. It is often what spurs improvement in the future. It is hard not to admire a polity that can go through the loss of a million lives while remaining so familiar in its names, habits and preoccupations. It is even harder not to worry.