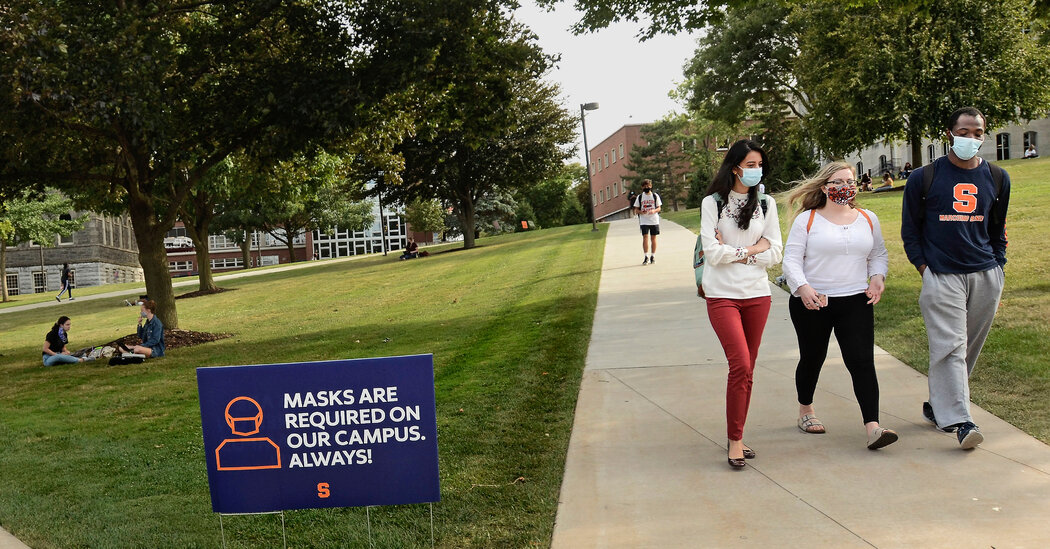 The orange spot first appeared on the national risk map in early April, marking three counties in central New York as having “high” community levels of the coronavirus, the only such cluster in the country.

By mid-April, the orange had spread to include 10 upstate counties, with a penumbra of yellow around them. Now it’s up to two dozen orange counties, stretching across upstate New York and spilling into Pennsylvania and Vermont.

There are smatterings of orange and yellow counties elsewhere in the country now as well, but the hot spot that started in central New York is the biggest, darkest blotch on the Centers for Disease Control and Prevention’s mostly pristine national map, and it may grow bigger still when the map is updated on Thursday evening.

Health experts say that people in the hot spot, which includes cities like Buffalo, Rochester, Syracuse and Binghamton, should be increasing their precautions. “These are areas where C.D.C. recommends people should wear a mask in public indoor settings due to an increasing level of severe disease and the potential for significant health care strain,” Dr. Rochelle P. Walensky, the C.D.C. director, told reporters on Tuesday.

But local officials have been reluctant to issue any orders along those lines. “Mandates don’t work well, they create anxiety in the community, and they’re unenforceable,” Ryan McMahon, the county executive of Onondaga County, which includes Syracuse, said in an interview. “What we have done is distribute tens of thousands of KN95 masks and Covid tests, and mail them to people’s homes.”

No one is quite sure why a new wave of coronavirus cases, caused by the highly contagious Omicron subvariants BA.2.12 and BA.2.12.1, took hold first in central New York.

“It’s really difficult to attribute where this is coming from,” said Mary McFadden, the director of public health in Broome County, which includes Binghamton. “It’s literally from everywhere. It’s very difficult to pinpoint with home tests.”

Mr. McMahon said it broke the pattern of past surges. “It didn’t make a lot of sense,” he said. “Being in the middle of the state, we see the peaks halfway through, or at the end.”

He said the surge was first spotted after the February school vacation week in some of his county’s more affluent towns, suggesting that travel may have played a role. The region is also home to a large number of colleges and universities, including Syracuse University in Onondaga County and one of the largest State University of New York campuses, Binghamton University, in Broome County.

Onondaga, with 473,000 residents, uses wastewater testing and extensive surveillance testing in its schools to track the virus, Mr. McMahon said, and has started to see improvement in the data from both in the last few days. But overall test positivity rates in the county remain high, and there were 112 people with Covid-19 in hospitals as of Monday, up from 51 four weeks ago.

One of the factors the C.D.C. assesses in judging risk levels is the strain on hospitals. Many of the hospitals in the hot spot region have been hard pressed to cope with the coronavirus throughout the pandemic.

New York Coronavirus Cases
Source: State and local health agencies. Daily cases are the number of new cases reported each day. The seven-day average is the average of the most recent seven days of data.

Some of the orange counties are thinly populated, and a small number of cases can make per-capita rates there look inflated, said Dr. Isaac B. Weisfuse, a medical epidemiologist at Cornell University, which had a surge of new cases in March. Cornell’s county, Tompkins, is yellow but is in the midst of orange counties.

“People in the young-adult ages seem to have higher rates than the elderly, or very young people,” he said. “A packed bar with someone who’s infected, you’re going to get a lot of infections out of that, if people are not wearing masks.”

Many of the college campuses in the region have higher vaccination rates than surrounding communities. For example, Wells College has a vaccination rate above 90 percent, according to Chris Pollock, a spokesman, while surrounding Cayuga County is at 59 percent.

Broome County, like many other upstate counties, is emphasizing mask-wearing, physical distancing, vaccinations and booster doses as preventive measures, but all on a voluntary basis. “We still need to be diligent and vigilant in how we protect ourselves and those who are more vulnerable,” Ms. McFadden said.

Some colleges in the region have taken stricter steps, with vaccine mandates for students and staff and newly reimposed mask rules on campus.

As the highly infectious subvariants continue to ripple outward from the original hot spot, turning more counties orange or yellow in the Northeast and farther afield, Mr. McMahon said he was at a loss to say what might have made his county one of the first to be affected.

“If you look at mask mandates, they came off at the same time” all over the region, he said. “Somehow the contagious subvariant got here first.”