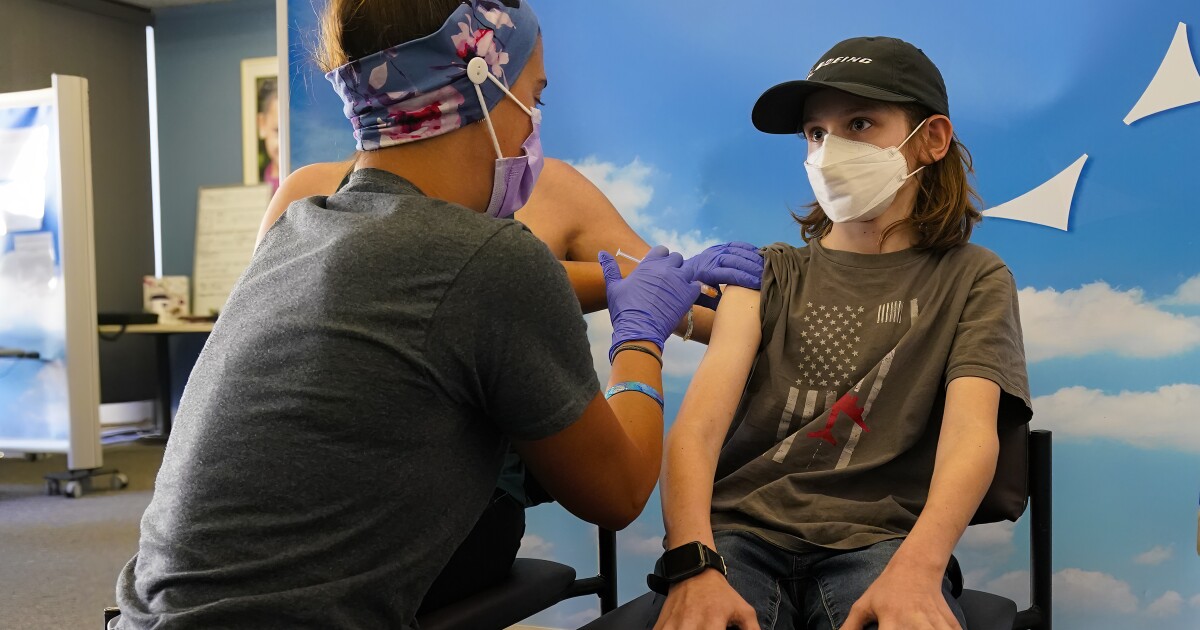 So far, COVID-19 booster doses have not been terribly popular among kids ages 5 to 11.

According to the state vaccination reports, about 7.4 percent of booster-eligible San Diego County residents in that age bracket had received booster doses through Thursday, compared to 10.2 percent throughout California. The FDA approved boosters for kids age 5 to 11 on May 19.

Boosters can only be given to those who are at least five months past their last regular dose, meaning that only about 77,000 of the 138,000 in this range who are fully vaccinated are now far enough along to qualify for a boost.

Vaccination in the 5-to-11 age bracket has remained low since first doses were approved, with the county health department estimating that 44.5 percent of the 310,643 kids ages 5 to 11 living in San Diego County had received at least one dose through June 1. By comparison, about 79 percent of those age 12 to 29 have had at least one dose, the next-lowest demographic group, with the region’s overall vaccination number at 87 percent.

Dr. Mark Sawyer, an infectious disease specialist at Rady Children’s Hospital, said the reasons why uptake among those of elementary school age has so far been slow comes down to a mix of factors. Overall, coronavirus has been producing milder illness in many since the Omicron variant first appeared in December, causing many parents to feel like the risk is low. And many are also, he said, concerned about reports of heart symptoms called myocarditis, even though that condition has been shown to appear most often in adolescent and young adult men.

“The data is showing that the risk of myocarditis is extremely low in the 5- to 11-year-olds, unlike the adolescents and young adults,” Sawyer said.

The issue is due to become even more pronounced next week with the federal government expected to approve first doses for children ages 6 months to 4 years.

Rady, said Chris Abe, Rady’s vice president of operations, has already ordered additional doses in anticipation of coming demand to vaccinate the youngest among us. Those in their first few years of life, she noted, generally need special attention when they are vaccinated, and training sessions are already underway with those accustomed to giving COVID-19 shots to adults.

Very young children, for example, are recommended to get their shots in their thighs rather than their arms, and two people are generally recommended to keep things steady when needles are used around the youngest patients.

“It’s a whole different thing to vaccinate a 6-month-old up to a wiggly 4-year-old,” Abe said.

There is reason to believe, she added, that some older kids who currently remain unvaccinated or who have not yet received their booster shots will start showing up when their younger siblings become eligible.

“What we’ve heard from parents is that they’ve also got under 5 kids and they’re going to bring them in together to do it all in one visit,” Abe said.

Some will remain concerned about vaccination for younger kids, and Sawyer said the reluctance is something that pediatricians battle with daily.

While it is true, he said, that COVID-19 has been more severe for older people, especially those with multiple underlying health conditions, there is still risk.

“COVID is a serious infection and it not only puts kids in the hospital, but it creates long COVID in children, which is a potentially years long, maybe lifelong, condition that we don’t fully understand,” Sawyer said. “Why would you take a chance of that happening when we have a vaccine that’s safe and works pretty well?”