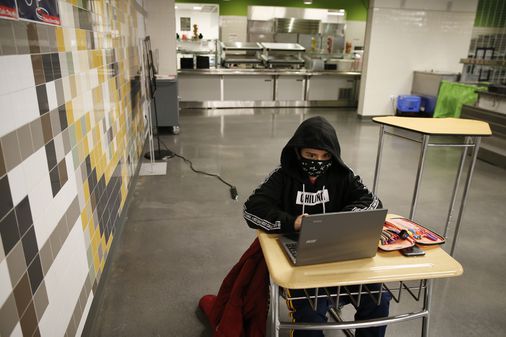 Public schools across Massachusetts are struggling. Nearly all districts face serious labor shortages: There aren’t enough teachers, nurses, and bus monitors and drivers to go around. Meanwhile, in the classroom, teachers feel burnt out, and students’ mental health issues are on the rise.

Bound inextricably to those overlapping crises is the legacy of school closures during the worst months of the COVID-19 pandemic. With the benefit of hindsight, it’s clear that online learning lasted too long, did not work for many students, and set back a whole generation of kids academically, socially, and emotionally.

Now education leaders face challenging and complicated questions related to the COVID-19 learning slide: What is the best way to help students recover from learning loss due to school closures and other pandemic disruptions? And what is the best way to keep districts accountable for closing those gaps, which widened preexisting achievement disparities between white students and Black, Latino, special education, and English-language learner students?

At one extreme are teachers unions that insist the whole idea of learning loss is overblown; on the other are advocates pressing for unrealistic deadlines.

In Massachusetts, those questions burst into public view this month after state education authorities unveiled goals for schools and districts to return to their 2019 achievement levels as measured by scores on the state’s standardized test, known as MCAS. The proposal was deemed misguided and lacking in urgency by advocates and some members of the elementary and secondary education board. Meanwhile, unions continue to lobby to get rid of the yardstick of test scores altogether.

Presented by commissioner Jeff Riley and his team at an early January board meeting, the proposal aims to be ambitious yet realistic. It sets a goal to get students back to 2019 achievement levels, which was the last year before the pandemic that students took the MCAS. The size of the decline from 2019 to 2022 scores will determine the school, district, or student group’s “time to recovery,” which will be up to four years for schools or districts that suffered the biggest declines. Robert Curtin, the state department of education’s chief officer for data, told the board that there was an unprecedentedly wide variance of MCAS results, with some schools in Massachusetts losing little ground and others falling badly off track.

But the plan was met with concerns, which will likely be aired Tuesday when the board hears public comments on the proposal. The Massachusetts Business Alliance for Education sent a strongly worded letter to Riley and the board. “Setting a return to 2019 achievement levels as our goal is an unambitious, backward-looking, ‘return to the status quo’ standard, particularly given that was a moment in time when Massachusetts had the dubious distinction of having some of the biggest achievement gaps in the country,” Ed Lambert, executive director of the MBAE, wrote. The plan “sets the bar at a level of continued inequity,” he noted.

Critics of Riley’s plan further argued: Why even set recovery targets? They fear that will only delay setting targets to close the achievement gaps that existed before the pandemic began. But the reality is that recovering from COVID learning loss is a prerequisite for moving on to those preexisting problems. Education officials explained during the presentation that their approach recognizes the need to meet schools and students where they are. All 400 districts and 1,500 schools in the state will start from different places compared to 2019 test results on the three MCAS subjects. The state plan also includes a parallel “path forward” system: Once a district or a school reaches 2019 levels, it will be given higher standards aimed at closing achievement gaps.

Lambert asserted in his letter that the state’s proposal violates the 2019 Student Opportunity Act, which increases state funding that goes to districts for each low-income, special education, and English-language learner student with the ultimate goal of closing achievement gaps that those student groups have historically experienced. But the reality is that the law’s funding has not yet been fully disbursed. Sure, districts have pandemic-related federal aid coming. But those are one-time funds.

The MBAE and some board members believe the focus should be on interventions and strategies to target the learning slide. These interventions include high-dose tutoring, extended school days, and expanded summer learning programs. Certainly, those are good ideas. But if districts are in a tight spot filling open positions for bus drivers and teachers, where are they going to find these tutors? Indeed, for districts, apparently the biggest obstacle to spending the one-time infusion of federal dollars is finding enough staff. Why not turn instead to traditional nonprofit partners to collaborate on after-school programming? Well, guess what — they’re also having trouble hiring staff.

That is what state education officials mean when they talk about meeting schools where they are. And that’s the reason why some were calling the board’s pushback to Riley’s plan tone-deaf. There’s nothing preventing districts from setting more ambitious goals than the state’s. But by setting achievable targets at the state level, Riley also preserves his regulatory firepower for truly lagging districts. As commissioner, Riley has tools to pressure or even take over districts if they fail to overcome pandemic learning loss or close achievement gaps. The state clearly lacks the capacity to intervene in dozens of schools at the same time, though.

Ultimately, opponents and supporters of Riley’s plan share the same goal, which is to help schools and districts help themselves, not to punish them or set them up for failure. The commissioner’s goal-setting proposal, which is required by federal and state law, should be seen as a floor and not a ceiling; as a complement, not a substitute, for long-term efforts to close achievement gaps that predated COVID. Perhaps it should be evaluated after one year to see how districts have fared, as the Massachusetts Association of School Superintendents’ executive director, Tom Scott, suggested to the Globe’s Adria Watson. That sounds like a reasonable compromise.