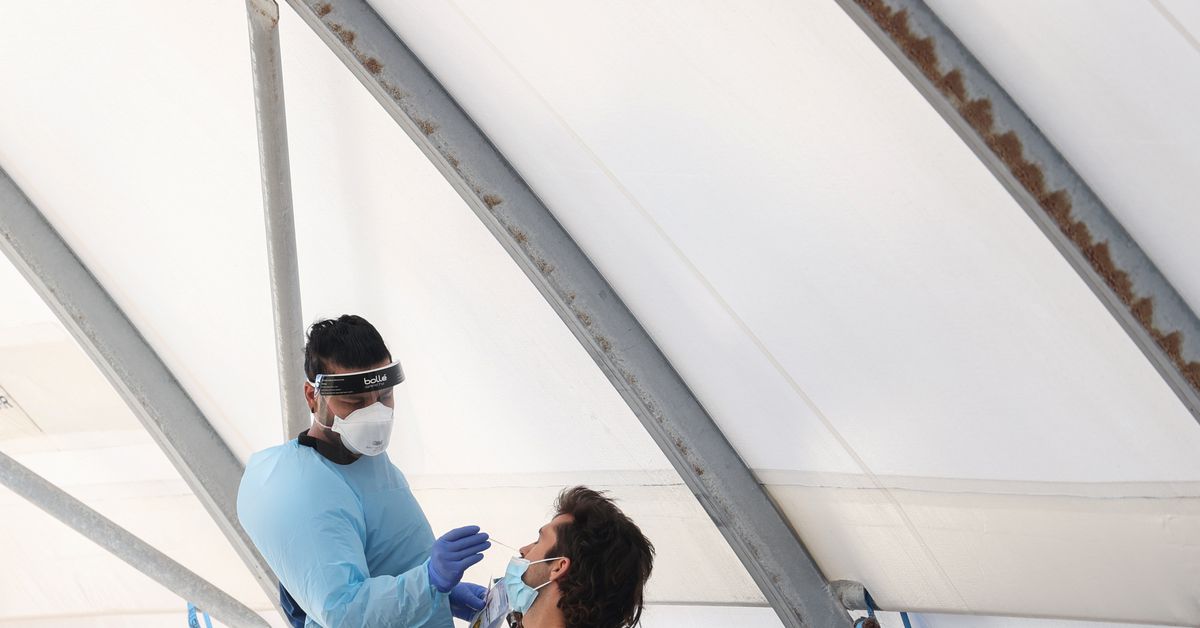 A health worker administers a test for coronavirus disease (COVID-19) on a member of the public at the Bondi Beach drive-through testing centre during a COVID-19 outbreak lockdown in Sydney, Australia, October 5, 2021. REUTERS/Loren Elliott

SYDNEY, July 25 (Reuters) – The number of Australians admitted to hospitals with COVID-19 hit a record of about 5,450 on Monday, official data showed, as the spread of highly contagious new Omicron sub-variants strains the healthcare system nationwide.

The figure has grown since late June, as the BA.4 and BA.5 strains became dominant since they can evade immune protection, whether from vaccination or prior infection, while some experts say the latter can be as infectious as measles. read more

The number of those in hospitals is the highest since the emergence of the coronavirus, exceeding January’s high of 5,390 during the first wave of Omicron infections. Daily death tolls have also risen, topping 100 on Saturday for the first time.

More than 1,000 retirement homes have suffered outbreaks, the government said, as the elderly are largely affected.

With several aged care centres battling a shortage of staff, the support of defence personnel in such facilities is to be extended until the end of September, Defence Minister Richard Marles said.

“It is an extreme measure and it’s right to describe it as that,” he told ABC television. “Given the number of outbreaks that we’ve got right now, this is the right thing to do.”

Many frontline workers in hospitals are also sick or in isolation, worsening the healthcare crisis. read more

During a harsh winter with both COVID-19 and the flu virus circulating, authorities have recommended the use of masks indoors and urgent booster doses of vaccine, while telling businesses to allow work from home.

Australia, one of the countries most heavily vaccinated against COVID-19, has given two doses to about 95% of those older than 16, although just about 71% have had booster shots.

Still, its tally of about 9.13 million infections and 11,181 deaths was lower than many developed economies.