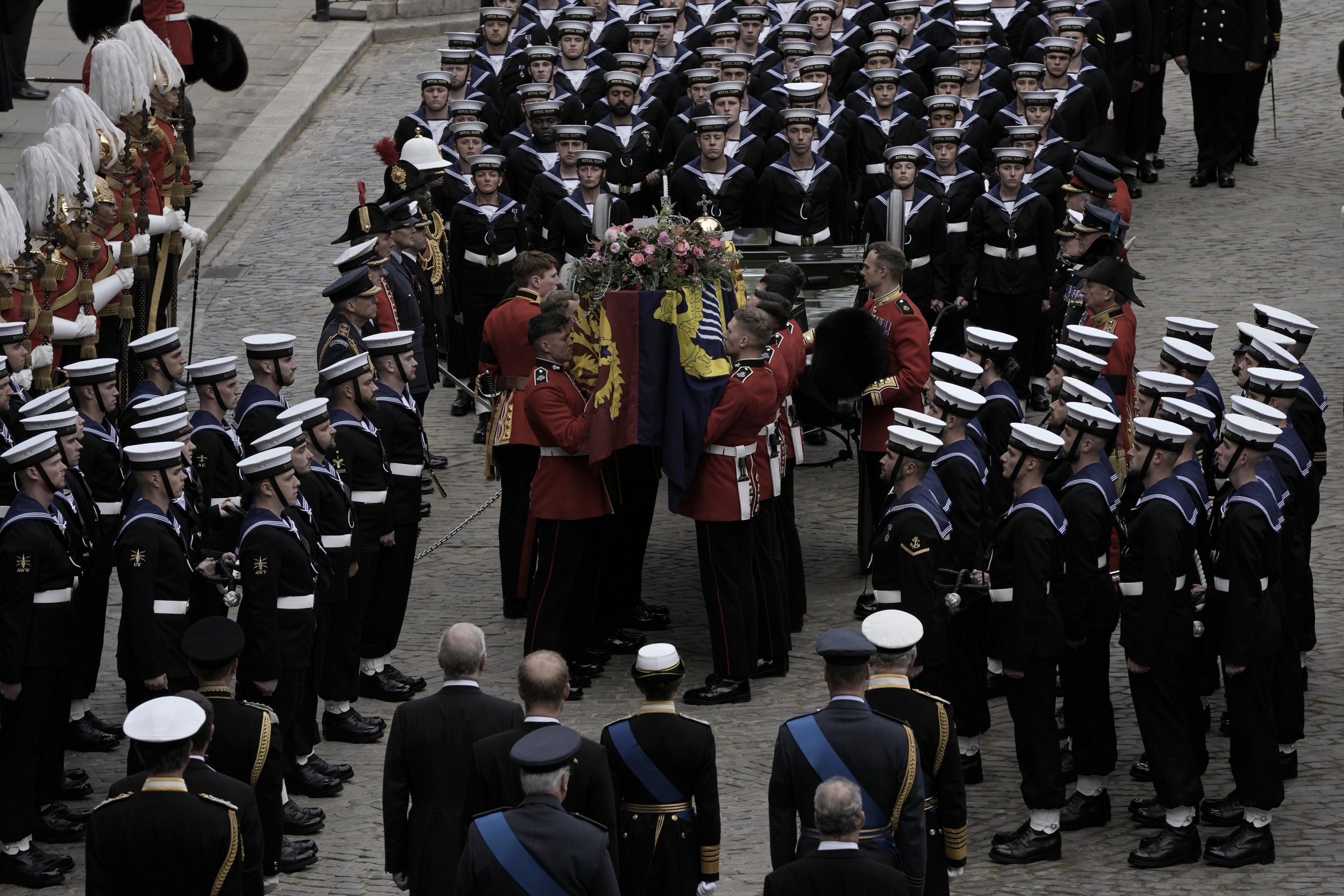 LONDON — Queen Elizabeth II’s funeral procession has arrived at the West Gate of Westminster Abbey for a state funeral service.

Pallbearers have lifted the coffin from the state gun carriage and carried it inside the Gothic medieval abbey where 2,000 mourners stood as it entered Monday.

Crowds lined the route of the procession through London. Bagpipes played as soldiers in bear skin hats and 142 sailors escorted the coffin from Westminster Hall, where the queen lay in state for four full days for the public to pay their respects ahead of her funeral.

The queen’s coffin is draped with the royal standard and a wreath of flowers including blooms and foliage cut from the gardens of Buckingham Palace and Clarence House at Charles’s request.

They include rosemary for remembrance, and myrtle cut from a plant that was grown from a sprig of myrtle in the queen’s wedding bouquet in 1947.

— Britain and the world to lay Queen Elizabeth II to rest

— Queen paved the way for transition to Charles in final years

LONDON — Pallbearers formed by members of the 1st Battalion Grenadier Guards have taken Queen Elizabeth II’s coffin from Westminster Hall for a solemn procession to nearby Westminster Abbey, where her state funeral service is to be held.

The late monarch’s coffin has been lying in state in Westminster Hall for four days. Hundreds of thousands of people have filed past to pay their last respects.

On Monday morning the coffin was placed on a state gun carriage, to be drawn by 142 Royal Navy service personnel to the nearby abbey past crowds of mourners lining the route.

LONDON — U.S. President Joe Biden and his wife Jill have arrived at Westminster Abbey for the state funeral of Queen Elizabeth II.

The American leader is among hundreds of heads of state and political leaders from around the world attending the funeral service in London.

Throngs of people were lined up, six people deep along the route of the funeral procession after the service. Many held up their cellphones to grab images of the day’s events.

Hundreds of thousands of people have gathered in the city for the ceremonies.

After the funeral the queen’s coffin will be taken to Windsor Castle to be laid to rest.

LONDON — A bell at Westminster Abbey has begun tolling 96 times, once for each year of Queen Elizabeth II’s life.

The abbey’s Tenor Bell struck at 9:24 a.m. Monday and was due to toll once a minute until the queen’s funeral service begins at 11 a.m.

Hundreds of mourners have already arrived at the Gothic cathedral for the service. They will be joined by royalty, heads of state and political leaders from around the world.

Others drawn from members of the public include long-serving nurse Nancy O’Neill, recognized for her efforts in the fight against Covid-19, and Pranav Bhanot, who helped deliver 1,200 free meals during the pandemic.

Afterward, a funeral procession will wind through city streets with the coffin carried on the state gun carriage as it makes its way to Windsor Castle to be laid to rest.

Dignitaries were arriving later, with many heads of state gathering at a nearby hospital to be driven by bus to the abbey.

Westminster Abbey is where Elizabeth was married in 1947 and crowned in 1953.

A day packed with funeral events in London and Windsor began early when the doors of 900-year-old Westminster Hall were closed to mourners after hundreds of thousands had filed in front of her coffin since Sept 14.

CANBERRA, Australia — Around 300 people are expected to watch a broadcast of Queen Elizabeth II’s funeral at an official Australian residence where during her final visit to the country the late monarch was woken in the mornings by shrieking sulfur-crested cockatoos.

The doors of Government House, the residence in the Australian capital Canberra of the British monarch’s representative Governor-General David Hurley, will be open to registered members of the public for the funeral.

Hurley is attending the London funeral in person. The queen spent several nights in Government House during her last Australian visit in 2011 and remarked at the time on the noise that the large white parrots made at dawn.

The public offer of an opportunity to watch the funeral at the 19th century mansion set on 54 hectares (130 acres) of parkland populated by kangaroos and other native wildlife was overwhelmed. Registration closed on Tuesday last week, a Government House official said.

The queen visited Canberra during 14 of her 16 Australian visits, beginning in 1954.

PARIS — The Paris Metro has renamed one of its stations after Queen Elizabeth II to honor the British monarch on the day of her state funeral.

The Metro company tweeted that the George V station, which serves the French capital’s famed Champs-Elysees boulevard, has been renamed Elizabeth II station for the day on Monday.

LONDON — The last member of the public to view Queen Elizabeth II’s coffin as it lay in state at the Houses of Parliament was Chrissy Heerey, a serving member of the Royal Air Force from Melton Mowbray.

Heerey says “it felt like a real privilege to do that.”

She said Monday she went through Westminster Hall twice — the first time in the early hours of the morning and then again just before its doors closed to mourners at 6:30 a.m. (0530GMT).

She says the experience was, “one of the highlights of my life and I feel very privileged to be here.”

As the end of more than four days of the queen’s lying-in-state drew to a close, the stream of mourners slowed to a trickle. After Heerey bowed her head toward the coffin and moved away, parliamentary officials paid their last respects before leaving the queen’s coffin in the 900-year-old hall ringed by four candles and military guards in ceremonial uniforms.

Her coffin was being taken later Monday morning to Westminster Abbey for a state funeral attended by 2,000 people.

George, who is now second in line to the throne, and his sister will walk through Westminster Abbey with the royal family in procession behind the queen’s coffin as it is carried by pallbearers Monday.

The funeral’s order of service showed that George and Charlotte will walk together behind their parents. They will be followed by Prince Harry and his wife Meghan, the Duchess of Sussex, and other royal family members.

The royal children’s 4-year-old brother, Prince Louis, is not expected to be present at the funeral, which will be attended by some 2,000 people.