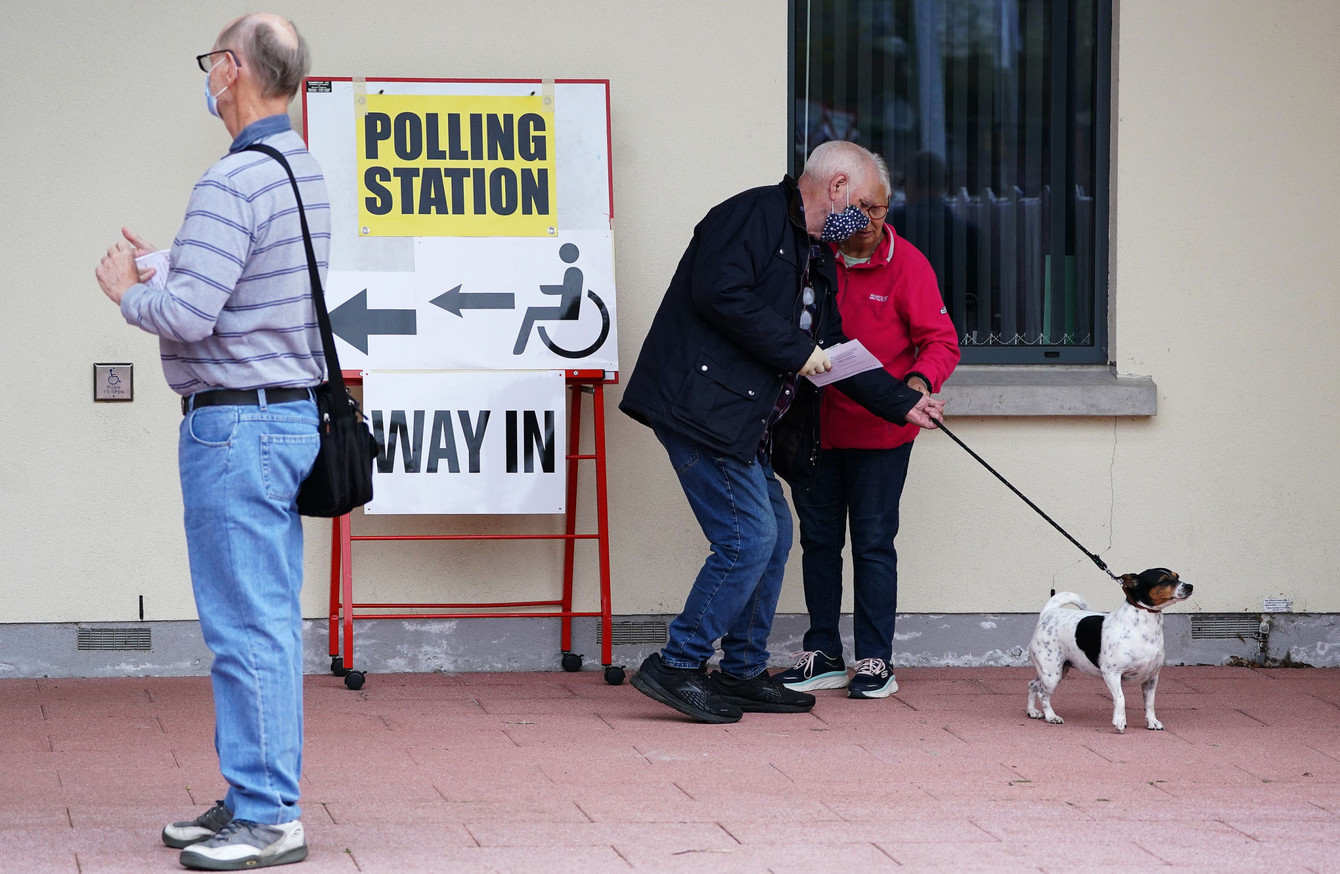 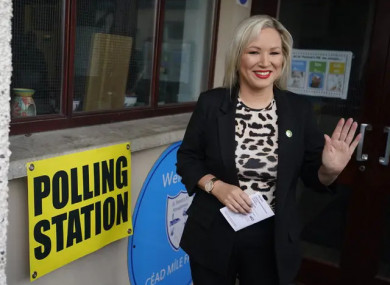 NORTHERN IRELAND’S POLITICAL leaders have cast their ballots in the Assembly election.

The process is taking place amid speculation of a potentially seismic result, with Sinn Féin hoping to emerge as the largest party for the first time.

She posed for photographs with some voters before leaving.

He is hoping that his unionist party will retain its position as the largest at Stormont. 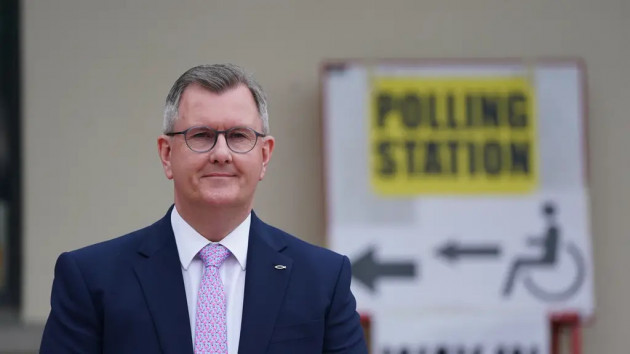 He repeated his message that the UK Government needs to act over the Northern Ireland Protocol.

He said: “I think people are determined to see unionism winning in this election.

He said: “It’s polling day, I don’t think anybody really knows the outcome of this. Things change throughout the day. We are still canvassing.”

Naomi Long, leader of the cross-community Alliance Party, cast her ballot accompanied by husband Michael at St Colmcille’s parochial house in the east Belfast constituency where she was once the MP.

Colum Eastwood, leader of the nationalist SDLP, voted at the Model primary school in his home city of Derry accompanied by his wife Rachael and his children.

He said: “The people are all powerful today and the people will cast their vote. We are very confident we will do well.” 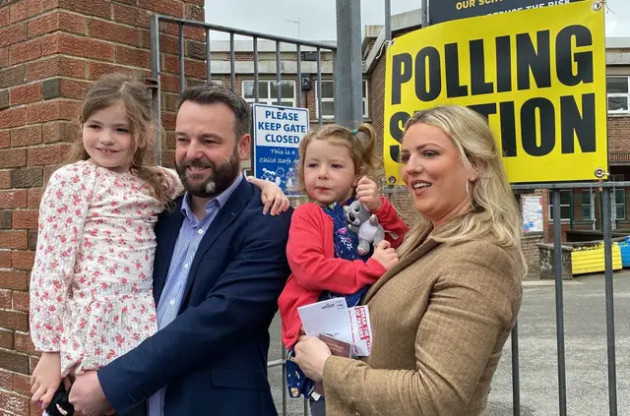 SDLP leader Colum Eastwood arrives to cast his vote with his family in the Foyle constituency in Derry.
Source: PA

Jim Allister, leader of the TUV, voted early in the morning at Kells and Connor primary school in Co Antrim.

The DUP and Sinn Féin are vying for the top spot in the election, which comes with the entitlement to nominate the next first minister.

A unionist party has always been the biggest in the Assembly, and previously the Stormont Parliament, since the formation of the state in 1921.

This year a number of opinion polls have suggested that Sinn Féin will finish ahead of the DUP to become the first nationalist or republican party to emerge top.

While the office of the First and deputy First Minister is an equal one with joint power, the allocation of the titles is regarded as symbolically important.

A surge for the centre-ground Alliance Party has also been suggested in pre-election polls.

The Northern Ireland Protocol has cast a long shadow over the election campaign following the resignation of First Minister Paul Givan in February in an effort to force the UK government to act over the post-Brexit trading arrangements. 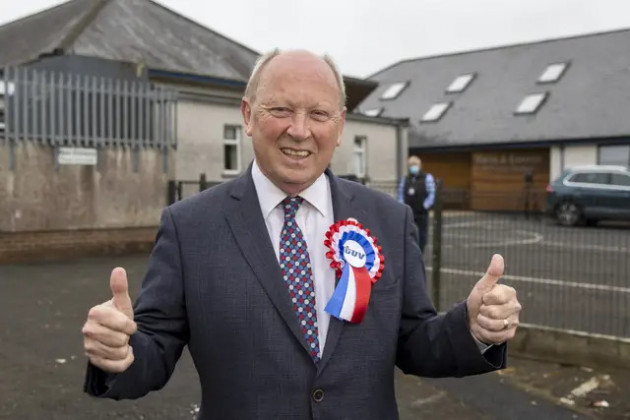 TUV leader Jim Allister give a thumbs up as he arrives at Kells and Connor Primary School, Ballymena, Antrim, to cast his vote.
Source: PA

This action left the Executive unable to fully function.

While ministers remained in post, they were restricted in the actions they could take.

Unionists object to the additional checks on goods arriving in Northern Ireland from Britain as a border in the Irish Sea.

Secretary of State Brandon Lewis urged the public to vote.

He also revealed he has told the parties of the need for them to work together to restore fully functioning devolved government after the election.

“The people of Northern Ireland are going to the polls today. I encourage everyone to get out there and cast their vote. It is vital that we give people the space to vote in an atmosphere of tolerance and respect,” he said.

“I have conveyed to the parties the need for them to work together to restore fully functioning devolved institutions as soon as they can, when the count is complete.”

#Open journalism No news is bad news Support The Journal

Five Assembly seats are up for grabs in 18 constituencies, with the overall number of MLAs returned 90.

A total of 239 candidates are running.

Counting will start at three centres in Belfast, Jordanstown and Magherafelt on Friday morning with the first results expected later in the day.

The DUP won 28 seats at the last Assembly elections in 2017, just ahead of Sinn Féin which returned 27 MLAs.

Next was the SDLP with 12 seats, the Ulster Unionist Party with 10 seats, Alliance with eight seats, the Green Party with two seats while People Before Profit and the TUV had one MLA each.

This year the DUP has been regarded as playing it safe, running 30 candidates, while Sinn Féin is running 34.

And there are 24 independent candidates.

“Please bring a mask. We’re trying to do everything that we can to provide as much protection.

Wendy Davis sounds off on gun politics in Texas

Anti-Disinformation Efforts Need to Be Professional, Not Political