The Perfect Enemy | Pharmacies Struggle to Use Up Supply of Paxlovid Covid Pills - The New York Times
Skip to content
May 26, 2022
Read Time:8 Minute 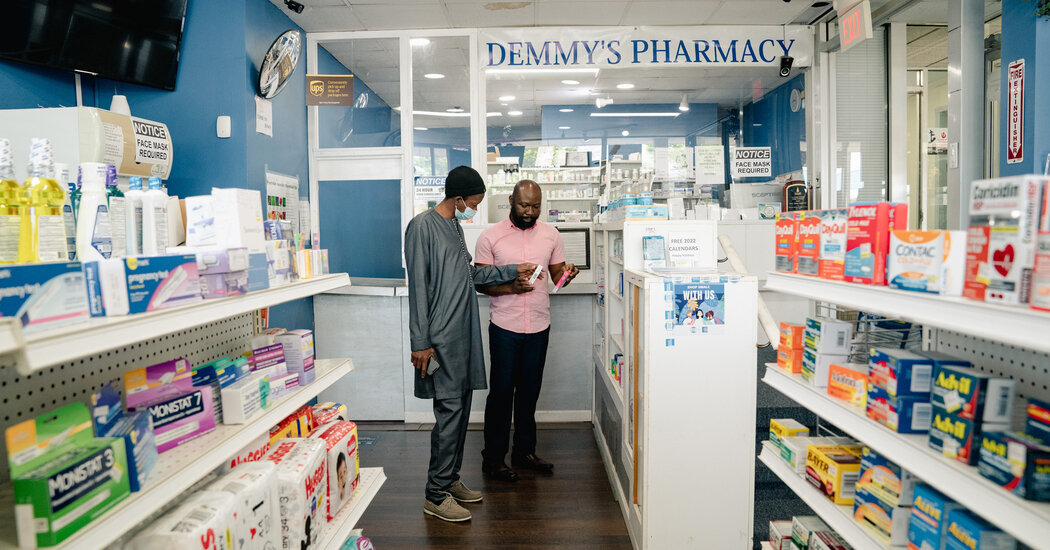 GREENBELT, Md. — Last month, the owner of a small pharmacy here secured two dozen courses of Pfizer’s new medication for treating Covid-19, eager to quickly provide them to his high-risk customers who test positive for the virus.

More than a month later, the pharmacy, Demmy’s, has dispensed the antiviral pills to just seven people. The remaining stock is sitting in neatly packed rows on its shelves in the suburbs of Washington, D.C. And the owner, Adeolu Odewale, is scrambling to figure out how to get the medication, Paxlovid, to more people as cases have increased over 80 percent in Maryland in recent days.

“I didn’t expect that I was still going to be sitting on that many of them,” he said of the pills he still has on hand. “It’s just that people need to know how to get it.”

The national rollout of the drug, which the Food and Drug Administration authorized for emergency use in December, has been far more complicated and less efficient than expected, leaving hundreds of thousands of courses unused as cases of the Omicron subvariant BA.2 surge. The first-of-its-kind treatment, authorized for Covid patients 12 and older who are at risk of severe illness, remained out of reach for many Americans for months as production ramped up.

But with the medication now more abundant, pharmacists, public health experts and state health officials say that encouraging the right people to take it, and making it easier for them to access, could help blunt the effects of another Covid wave.

State health officials say that many Americans who would be good candidates for Paxlovid do not seek it out because they are unaware they qualify for it, hesitant about taking a new medication, or confused by the fact that some providers interpret the eligibility guidelines more narrowly than others.

Since the medication has to be prescribed by a doctor, nurse practitioner or physician assistant, people have to navigate an often byzantine health care system in search of a prescription, then find a pharmacy that carries the treatment, all within five days of developing symptoms. The medication, prescribed as three pills taken twice a day for five days, is meant to be started early in the course of infection.

A new federal program that President Biden announced earlier this year, called “test to treat,” is supposed to let people visit hundreds of qualified pharmacy-based clinics, community health centers and long-term care facilities across the country to get tested for the coronavirus and, if positive, receive Paxlovid on the spot. But almost two months later, it is still limited in its reach and has not dramatically sped up access to the drug beyond what its sites were already equipped to do, experts said.

More than 630,000 courses of the drug — roughly a third of the supply distributed to date — are currently available, and the federal government has been sending 175,000 courses to states each week, according to federal data. Its use rapidly increased in recent weeks, federal officials said, but data on who has received the medication remains sparse.

The White House on Tuesday morning announced a series of new measures intended to shore up programs for getting the pill to eligible Americans, emphasizing the surplus and pushing doctors to stop thinking of the treatment as scarce. It said it would allow pharmacies to begin ordering the drug directly from the federal government, and that it would aim in coming weeks to double the number of pharmacies carrying Covid antiviral medication, to 40,000. The administration would also work with states to open new test-to-treat locations, the White House said.

Of the more than 2,000 test-to-treat sites, about half are CVS MinuteClinics with in-house nurse practitioners and physician assistants who can prescribe the drug. Many of the other sites are Walgreens, Kroger and other chain pharmacies, as well as federally funded health centers.

Public health experts and patients who have tried navigating the program say that appointments can still be difficult to find, and can require long drives. Much of rural America lacks easy access to the program.

“It’s a good idea, except for all of the barriers,” said Dr. Walid Gellad, a pharmaceutical and drug safety expert at the University of Pittsburgh.

One of those obstacles, he said, is differing interpretations of the eligibility guidelines. Some health departments and doctors might go by the C.D.C.’s definition of people at high risk for becoming severely ill or dying from Covid, which includes not only people 65 and older and those with chronic medical conditions but also people who are at increased risk based on “where they live or work, or because they can’t get health care.”

“In other cases they say, ‘Because of a shortage, we’re limiting it to extremely high-risk patients,’” Dr. Gellad said, citing recent screening guidance for pharmacists in Los Angeles County.

Dania Palanker, an assistant research professor at the Center on Health Insurance Reforms at Georgetown University, tried to navigate the test-to-treat system herself recently, using the Biden administration’s new one-stop website for Covid-19 resources, but ended up getting shunted to what she called the “maze” of finding an appointment on CVS’s website. She worries, she said, that the people who most need the treatment are those who often fall through the cracks of the fragmented American health care system.

“You still have to have access to health coverage or be able to pay for a test upfront,” she said.

Giving pharmacists prescribing power could dramatically expand the speed and ease with which people get the treatment, public health experts say. But regulators at the F.D.A. and other federal health officials believe there is reason to not allow pharmacists to prescribe Paxlovid themselves, even though some Canadian pharmacists can do so. The treatment can interfere with certain medications and should be prescribed at a lower dose for people with kidney impairment, which is measured with a blood test.

Pharmacists say that they are highly trained and well equipped to conduct such screening themselves. Michael Ganio, senior director of pharmacy practice and quality at the American Society of Health-System Pharmacists, said pharmacists could get Paxlovid to patients faster if they could prescribe it, “without having to call a physician’s office and wait for a call back, and hope it happens within five-day period.”

Noting that MinuteClinics tend to be located in affluent areas, he said of the test-to-treat program: “In terms of expanding access, it hasn’t done what it could do, particularly in medically underserved areas.”

Use of Paxlovid has exploded in recent weeks in Vermont as cases have climbed there, a trend that can be attributed to growing awareness of the drug, said Dr. Mark Levine, the state’s top health official. But he said that Vermont, which has high rates of patients with both health insurance and primary care providers, would not benefit from a system like test-to-treat as much as others.

“Test-to-treat is most ideal for where you have the most trouble connecting people with health care,” said Dr. Levine. “Generally those places don’t have as much capacity in primary care systems, or don’t have a highly insured population.”

Even though Paxlovid is free, uninsured patients and people with high-deductible plans who seek a prescription from a pharmacy clinic or urgent care center can get socked with consultation charges.

Amanda Fuller Moore, a pharmacist in North Carolina’s Department of Health and Human Services, said uninsured people in her state were rightly concerned about charges they could encounter while seeking a test or prescription, “especially in a setting where it can difficult to figure out what that charge might be.”

“That makes them even more reluctant to seek” Paxlovid, she said.

Officials in New York City began a program over the winter that relieved some of the pressures, delivering the pills directly to homes for free, a move that earned praise from White House officials.

But some Americans are stuck without easy access to any health provider, putting more pressure on rural states to deliver the treatment efficiently. George Gerhardt, a North Dakota health official, said the state keeps a reserve supply of the medication in case of an outbreak or shortage. The state does not have a CVS MinuteClinic, and has just a few test-to-treat locations, he said.

Chastity Dolbec, the director of patient care at Coal Country Community Health Center in Beulah, N.D., one of those sites, said the antiviral medication was easy to take, unlike monoclonal antibody infusions, which take hours to administer. That makes the pills an important option for a heavily rural state.

Dr. Odewale, who had long dreamed of opening his own pharmacy and helping a community with it, tried to work around the barriers and install what he described as an approximation of a test-to-treat system. He stocks rapid coronavirus tests at the register so customers can quickly confirm whether they have Covid, then line up a prescriber. He tried to recruit local doctors to prescribe Paxlovid for customers referred by him, and to whom he would dispense the pills.

He already delivers prescriptions for free, and could easily drop off Paxlovid, too, he said, as 90 percent of his customers, who are largely middle-aged or older, live close to the pharmacy.

He also created his own form for customers to take to doctors or other providers to ease the paperwork required for a patient seeking the medication.

But those steps, he said, have not moved the treatment off his shelves. Dozens of people have called, asking if they can get the medication from Demmy’s.

His pharmacy, he has to tell them, was mistakenly listed by the federal government as a test-to-treat site.

“Every day I just look at it,” he said of his Paxlovid stock. “And it’s just sitting there.”