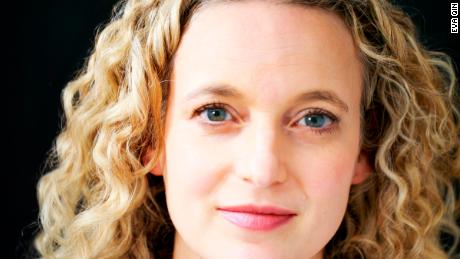 Welcome to Britain, where this week urban fires spontaneously erupted, the Queen’s guards melted under bearskins, trains ground to a halt and Members of Parliament — grudgingly — removed their jackets.
As the United Kingdom officially experienced its hottest day ever at 40.3C (104.5F), large swathes of the country fried in the heat, and a population accustomed to such adjectives as “mild,” “tepid” and “clement” to describe its weather suffered a blast from the scorching blowtorch that is global warming.
After millennia bemoaning leaden skies and constant drizzle, Britons took to complaining about the heat with aplomb; actually coping with Saharan-like temperatures came less naturally.
The difficulty adjusting is perhaps forgivable. Shakespeare’s “other Eden” was always a temperate place, of gentle summers, where the biggest concern was that a passing shower might delay the village cricket match, not that the umpire could expire of sunstroke.
Frankly, we couldn’t cope. We were — literally — un-cool. As Aussies tweeted “helpful” tips for surviving the heatwave, hospitals canceled operations, teachers cut classes and planes were grounded as the runway melted. As for public transport: no chance.
South Yorkshire’s Barnsley — sodden, dank Barnsley, for heaven’s sake, a place with many charms but hardly the Riviera, was hotter than Beirut — by 20 degrees.
It was all terribly un-British. Sure, there had been forest fires in France all week, and Australia and California seem to spend half the year ablaze these days — but Wennington in east London (where a sudden inferno consumed a row of terraced houses)? That’s freaky stuff.
A kind of madness took over. As the Met Office’s first ever Red warning was issued, countless men fired up their barbeques as if they wanted to self-immolate while scorching meat.
Milk-white bodies unused to the sunshine glare roasted to a deep hue of lobster.
We ate ice lollies and complained and sweated and sat in kids’ paddling pools and complained and rescued dogs trapped in hot cars and complained and crowded on to beaches and into parks and complained, and it was just a lot and it was very, very hot. 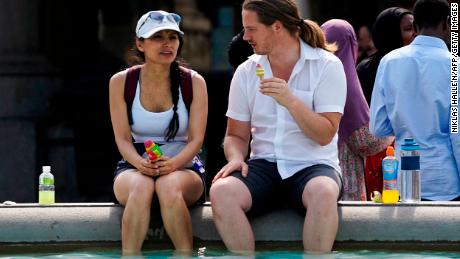 Along with many others, my company issued a stern shelter-at-home edict (so nostalgic, so Covid-19 Christmas 2020) until it became clear working from home in fact constituted a cruel and unusual punishment under the UN Charter of Human Rights.
Victorian terraces and 1960s tower blocks were never meant for heat like this. Sans air conditioning, upper floor bedrooms became uninhabitable and sleep impossible; by night, we sweated dreamlessly, fantasizing about the shutters and terracotta of Spain; the stone floors of the south of France.
Several of my co-workers made a dash for it to the office, like soldiers crossing no man’s land, gambling that 30 minutes of the red fires of hell that was the Jubilee Line were worth enduring to make it to the oasis of air-conditioning in our unusually modern offices in the landmark Shard skyscraper. Meanwhile my family and I packed our bags and headed to the coast — a balmy 96F — where traffic jams snaked back to the motorway and the ice cream trucks ran out of the sweet stuff by 10am. 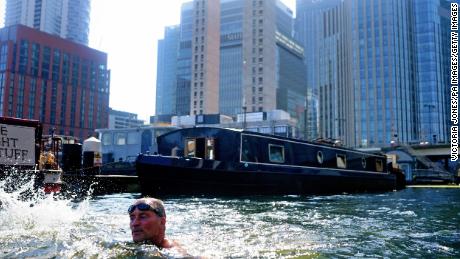 Back in Westminster, where I usually ply my trade, Commons Speaker Sir Lindsay Hoyle, bent so far as to tell gentlemen MPs they could remove their jackets for the remainder of the week, although a dim view would be taken of those who eschewed ties.
Defence Secretary Ben Wallace spoke for many when he confessed to finding the relaxation in the dress code somewhat discombobulating. What next, he mused, flip flops in the hallowed chamber?
Outside in the corridors of power, the remaining candidates in the Conservative Party leadership contest to replace Boris Johnson as Prime Minister continued to woo their peers, perspiring their way through a never-ending series of hustings and debates.
Critics have flagged the lack of mention of the planet in the contest. Like Meryl Streep’s president in the satire “Don’t Look Up,” the contenders seem content to blithely discuss the future of Britain in terms of taxes and woke wars, even as the asteroid of climate change barrels towards them.
By Tuesday night, the skies above London had opened; the worst of the heat wave was over, for now. But we won’t be putting the barbeque away; it’s due to be 85F on Sunday.
Facebook
Twitter
Pinterest
LinkedIn
Email