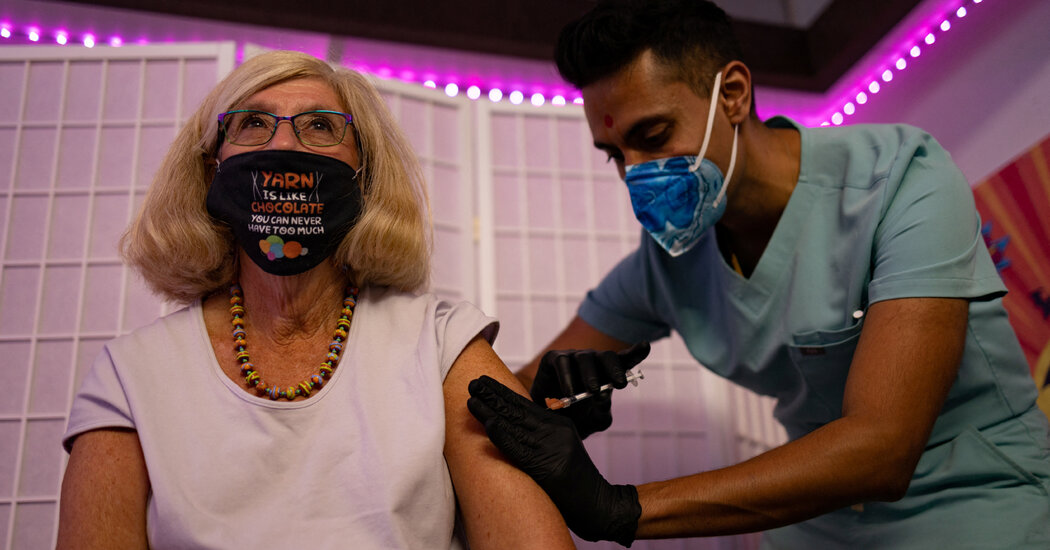 Federal officials are hoping that encouraging new findings will spur more Americans to get an updated booster before a feared surge in coronavirus cases this winter.

WASHINGTON — A new study by Pfizer and BioNTech suggests that their updated coronavirus booster is better than its predecessor at increasing the antibody levels of people over age 55 against the most common version of the virus now circulating.

Federal officials are hoping that the encouraging results will improve what has so far been a dismal public response to the retooled shots. Only about 8 percent of Americans ages 5 and up have received the new boosters from Pfizer and Moderna since they were introduced in September.

Pfizer and BioNTech announced the study results in a news release on Friday. The companies said that one month after getting the new booster, clinical trial participants over 55 had antibody levels that were about four times as high as those who received the original booster. The study measured the levels of neutralizing antibodies against two sister subvariants of Omicron known as BA.4 and BA.5.

The number of participants in the study was small, with 36 people over 55 receiving the new booster and 40 people in that age group receiving the old one. And because the study measured antibody levels only a month after trial participants were boosted, it did not provide any indication about the potential durability of the protection in the longer term.

Still, Dr. Ashish K. Jha, the White House’s Covid-19 response coordinator, said the results were “way better than I was expecting” given the continuing scientific debate over whether the updated boosters would prove more than more than a marginal advancement over their predecessors. “This is a pretty substantial upgrade,” he said.

Results from a similar clinical trial by Moderna on its updated booster are expected as early as next week.

Pfizer’s study also examined the effects of its updated shot on younger adults, though the study did not include a control group that would have allowed for a comparison for that age group between the new booster and the original one.

Pfizer said that the updated shot increased antibodies nearly tenfold for younger adults and 13-fold for older ones compared with antibody levels before receiving the shot. Virologists said those responses were to be expected after a booster.

“There’ll be some extra protection for a period of time, measured in a few months,” said Dr. John P. Moore, a virologist at Weill Cornell Medicine. “The magnitude of the extra protection is hard to assess because it depends on what variants are around.”

Biden administration officials said the findings offered a new reason for Americans to seek out the updated shots before what experts fear could be a winter surge of the virus that leads to tens of thousands of unnecessary deaths.

“You can see the train coming down the tracks,” said Dr. Peter Marks, the top vaccine regulator for the Food and Drug Administration. “The time to get off the tracks is now, not when you can smell the oil from the train engine.”

But as the pandemic nears the three-year mark, the public seems deeply weary of Covid vaccinations. In a Kaiser Family Foundation survey conducted in September, half of adults said they had heard little or nothing about the new boosters.

“Folks have just tuned out,” said Michael Fraser, the chief executive of the Association of State and Territorial Health Officials. “Which is totally unfortunate and not the place where you want to be.”

The updated shots from Pfizer and Moderna target the original version of the virus as well as the Omicron subvariants BA.4 and BA.5. The latter subvariant became dominant in the United States this summer and still accounts for roughly 40 percent of cases across the country. But two new Omicron subvariants, BQ.1 and BQ.1.1, are gaining fast.

Administration officials say those new subvariants are structurally alike enough to BA.5 that the updated shots should continue to work, although they predict some falloff in protection.

While urging Americans to get the new boosters, Biden administration officials are not casting them as a final answer to the pandemic. For nearly two years, the administration has been engaged in a continual game of catch-up as the virus has shifted form to evade immunity induced by prior infection and vaccination. So far, administration officials have not persuaded Congress to allot more money to develop the next generation of vaccines that could end the behind-the-curve cycle.

Asked whether positive findings about the new boosters would help pique interest in the shots, Dr. Philip Huang, the health director for Dallas County in Texas, said, “Anything that provides some more reinforcement for people who are on the fence or delaying always helps.” But, he said, “if there is a bump up in hospitalizations and serious illness, that’s when people start to take it seriously.”

“It’s a shame that’s what it takes to get motivation up,” he added.

Some public health experts said that President Biden himself had undermined any sense of urgency when he declared in a television interview in September that “the pandemic is over.” Last week, he tried to draw attention to the new shots by getting his own dose on camera.