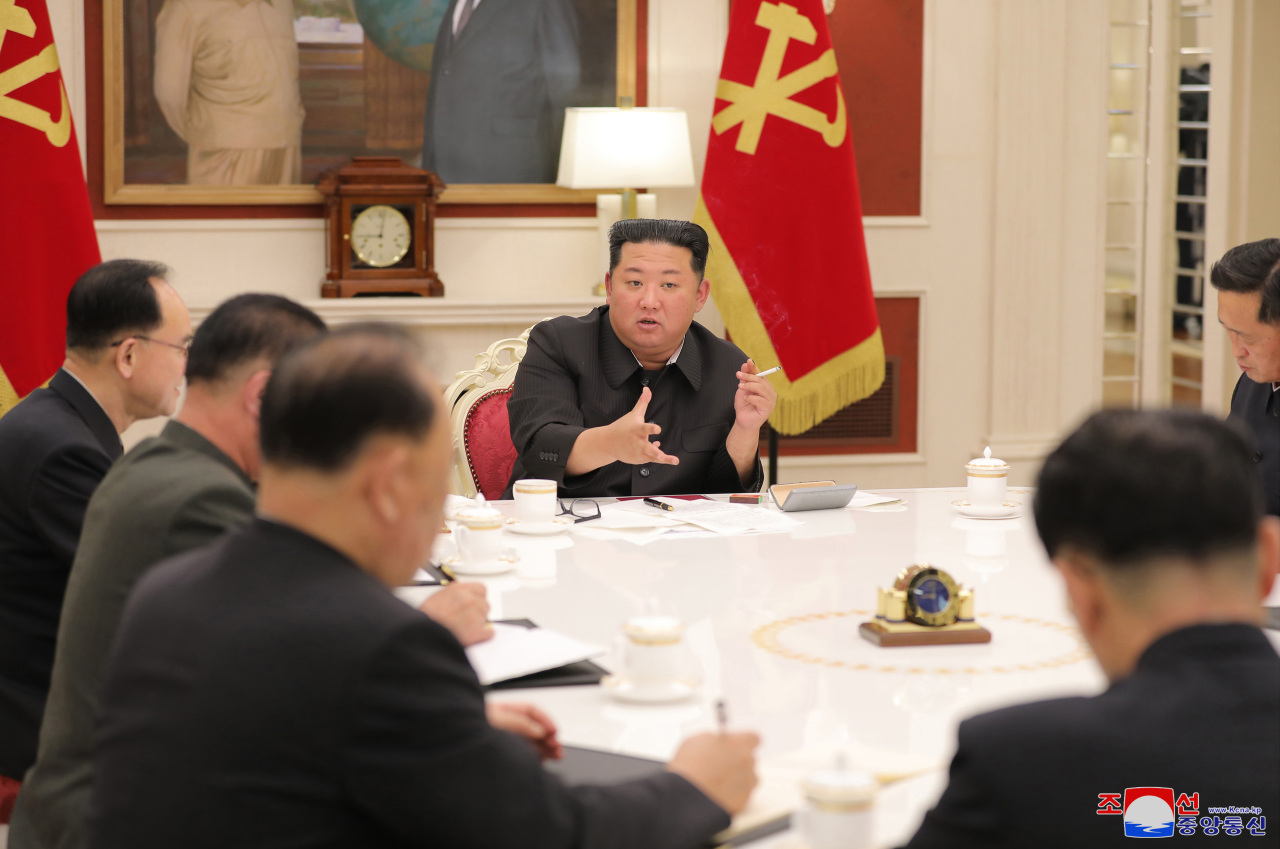 North Korean leader Kim Jong-un rebuked cadres for their “slackness” in handling the COVID-19 outbreak while the country claimed that the pandemic situation was taking a “favorable turn,” the state-run Korean Central News Agency reported Wednesday.

Kim on Tuesday convened a rare first meeting of the Presidium of the Political Bureau of the Center Committee of the ruling Workers’ Party of Korea, the highest decision-making body, to discuss the spread of infectious disease at the headquarters of the Party Central Committee.

The consultation came after the North Korean leader held three lower-level meetings of the politburo since May 12 where it officially admitted the infection of the BA.2 subvariant of omicron for the first time and dropped its zero-COVID policy.

At the meeting, the politburo presidium specifically looked into the failure of the country, party cadres and state organs in properly coping with the public health crisis and discussed ways to promote their roles.

The North Korean leader censured the “immaturity in the state capacity to cope with the crisis which has come to the fore from the early period as well as the lethargic attitude, slackness and inertness of state executive officials,” the KCNA reported in a Korean-language dispatch.

Kim went on to say that the lack of national competency and the top functionaries’ idleness have “fully disclosed the weaknesses and vacuum of the country’s work and led to further increasing the complexity and hardships in the early period of epidemic prevention campaign” in which the speed of taking anti-epidemic measures is critical in saving people’s lives.

During the meeting, the politburo presidium also “admitted the legitimacy, efficiency and scientific accuracy of the policies for state emergency epidemic prevention which have been currently implemented.”

The politburo presidium said the COVID-19 situation has started to improve, according to KCNA. The media report specified that the meeting discussed the issue of steadily and swiftly adjusting the epidemic prevention and control policies depending on the “continuity of taking a favorable turn like today and changes in epidemic prevention.”

Precursor to major purge
North Korea’s state emergency epidemic prevention headquarters reported 232,880 more cases with fever symptoms and an additional six deaths without elaborating the cause for the last 24 hours as of 06:00 p.m. Tuesday, KCNA reported Wednesday. During the period, approximately 205,630 people had recovered.

But despite the continuing surge in fever cases, Pyongyang alluded it would stick to the current COVID protocols, which have largely relied on lockdown measures.

During the meeting, the North Korean leader urged the country to “reinforce the state unified and command system and obedient system” and “intensify the education and control” to block the arbitrary interpretations and actions of all entities and officials.

Yang Moo-jin, a professor at the University of North Korean Studies in Seoul, said the politburo presidium meeting was to “reprimand the party cadres, and urge them to press on harder and propagate the favorable turn (of the COVID-19 situation) on account of the scientific preventive measures to assuage the people’s fear.”

“The reproach for the immaturity and incompetence of the party cadres and the state organs is groundwork to clarify where the responsibility lies in the future,” he added, forecasting that a major reshuffle, such as a large-scale purge, could take place at the party plenum scheduled for early June.

Since the outbreak of the COVID-19 pandemic, the North Korean leader has openly shifted blame on functionaries.

Kim on May 15 lambasted the Cabinet and health officials for the slow and inapt delivery of medicine and medical supplies to the North Korean people. Kim also criticized the incompetence of the judicial and prosecutorial sectors in implementing executive orders to guarantee the provision of drugs.

Comprehensive approach needed
But the UN agencies have called for North Korea to respond to the international community’s offers of humanitarian aid and expressed concerns over the country’s strategy to impose nationwide and draconian lockdown measures to contain the spread of the suspected COVID-19 cases.

“WHO is deeply concerned at the risk of further spread of COVID-19 in the country particularly because the population is unvaccinated and many have underlying conditions putting them at risk of severe disease and death,” WHO Director-General Tedros Adhanom Ghebreyesus said on Tuesday during a press briefing.

The WHO head also said the organization has “offered to provide a package of technical support and supplies, included diagnostic tests, essential medicines, and vaccines ready to be deployed to the country.” He also added that the WHO has requested North Korea to share data and information on the COVID-19 outbreak.

Maria Van Kerkhove, the WHO’s technical lead on COVID-19, emphasized that North Korea should utilize tools such as antivirals, diagnostic tests and vaccines that are ready to be used to handle the highly transmissible omicron virus.

“So it’s a matter of using a comprehensive approach as we’ve talked about with all countries, using the tools at hand to be able to detect the virus, to be able to support populations who are at risk, particularly for severe disease.”

“WHO bears no particular power and would not and cannot intervene in a sovereign state without the express wish and intent and invitation of that state,” Ryan said.

The international community and South Korea’s suggestion to provide humanitarian assistance has been met with silence, as North Korea chose to coordinate with China and Russia in combating the COVID-19 pandemic.

When asked if China has sent medicine and medical and protective supplies, a spokesperson for the Chinese Ministry of Foreign Affairs on Tuesday said the two countries “have a fine tradition of mutual assistance.”

“Fighting COVID-19 is a common challenge for all humanity. We will work with the DPRK to support each another and enhance cooperation in the fight against the coronavirus,” Spokesperson Wang Wenbin said during a press briefing.

The Russian Ministry of Foreign Affairs on Tuesday said Deputy Foreign Minister Igor Morgulov and North Korean Ambassador to Russia Sin Hong-chul discussed the issues of bilateral relations including cooperation in coping with the spread of COVID-19.