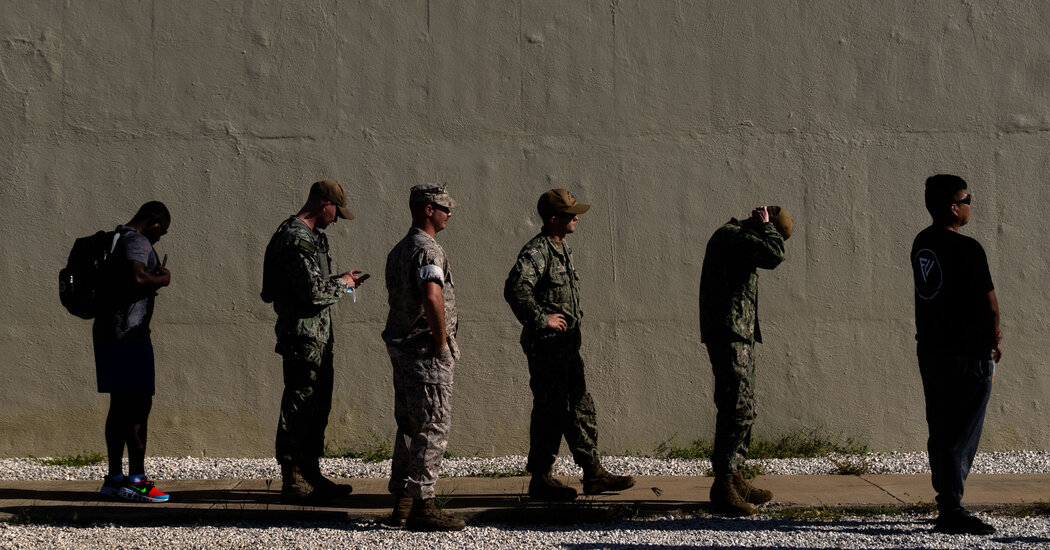 The military allowed two detainees to meet with lawyers this weekend even as the number of confirmed cases rose to one-third of the prison population.

The number of Covid cases among terrorism suspects at the prison at Guantánamo Bay has grown, according to people familiar with its operations. One U.S. official reported on Sunday that more than a third of the 35 wartime detainees had contracted the coronavirus.

Only two of the men who were confirmed to have the virus by Friday were identified. Both are former C.I.A. prisoners who were never charged.

One was the Palestinian prisoner known as Abu Zubaydah, 51, who tested positive for the virus on Wednesday, prompting the military to cancel all legal meetings. By Friday, a Somalian man, Guled Hassan Duran, 48, had also tested positive.

Both have been detained in the maximum-security Camp 5 prison building that houses men who were held in the C.I.A.’s overseas prison network, called the black sites, and were brought to the Navy base in Cuba in 2006 or 2007.

The other 10 or more were believed to be among the 20 general population prisoners in the adjacent Camp 6, a medium-security building where detainees share common space for meals, showers, prayer and recreation. All the men held there have been approved for repatriation or resettlement in another country, if U.S. diplomats can reach safe-transfer agreements. Mr. Duran is also eligible for resettlement elsewhere because Somalia is considered too unstable for a repatriation.

None of the people who provided the figures and information about the outbreak agreed to be identified because of the classified nature of Camp 5 and a Trump-era move toward secrecy about prison operations.

The Pentagon declined on Sunday to confirm that the figure had risen to “more than a dozen” of the prisoners. Spokesmen also would not say how many of the 1,000 men and women, both U.S. troops and civilians, who work on the prison staff had contracted the virus.

People on the base of 6,000 residents had noted a rise in cases earlier this month as contractors, Navy families, prison staff members and other people flowed back onto the base on flights from Jacksonville, Fla., after the holidays.

On Saturday, after the cancellation of meetings on Wednesday, Thursday and Friday, most defense lawyers who had come to the base to consult with the prisoners they represent departed on a shuttle to Washington, D.C., some without ever meeting their clients.

Then on Saturday and Sunday, according to members of the legal staff, defense lawyers were allowed to meet with two of the men who are charged in the Sept. 11 attacks case — Khalid Shaikh Mohammed and Ramzi bin al-Shibh — because it had been established through contact tracing and testing that they had not been exposed to the virus in the previous days.

On Friday, the Army lawyer who runs the Pentagon’s war court defense organization, Brig. Gen. Jackie L. Thompson Jr., wrote to frustrated staff members that he had been assured that the prison commander, Brig. Gen. Scott W. Hiipakka, was “implementing protocols to keep our clients and the guard force safe.” He advised defense lawyers to “seek a bit of serenity for yourselves,” according to staff members who had received the message.

But several lawyers, who had been shut out of meetings last week, called the notice insufficient and wanted to be specifically informed which prisoners had contracted the coronavirus and what measures were being taken to care for them.

Pentagon officials also declined on Sunday to say whether any of the ill prisoners had been given the antiviral drug Paxlovid, or to describe the care that the Navy health care staff was providing at the prison.

The Pentagon said on Sunday evening that the Southern Command, its outpost in Miami that oversees the prison operations, had “not requested additional medical support.” It said the prison staff “is committed to and capable of maintaining the health and welfare of its personnel and detainees in our custody.”