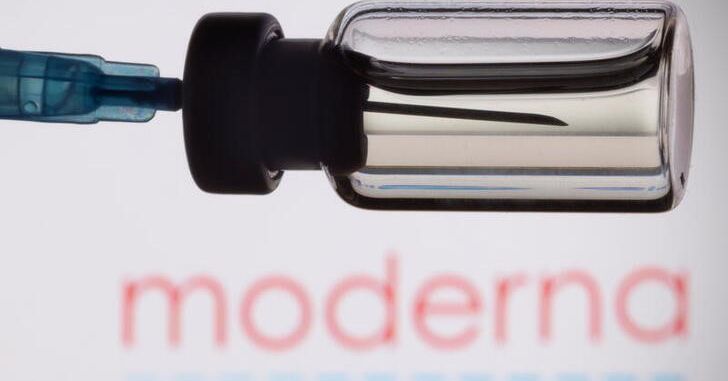 A vial and a syringe are seen in front of a displayed Moderna logo, in this illustration. REUTERS/Dado Ruvic

June 8 (Reuters) – Moderna Inc (MRNA.O) said on Wednesday a new version of its coronavirus vaccine produced a better immune response against Omicron than the original shot, as the drugmaker pursues a booster against a surge in infections in the fall season.

The vaccine, which was given as a fourth dose in a trial that enrolled more than 800 people, raised virus-neutralizing antibodies by eight-fold against Omicron.

The company said it plans to submit data on the vaccine, which targets Omicron as well as the original coronavirus strain, to regulators in the coming weeks and the doses could be available to consumers in late summer, sending its shares up 3%.

Moderna president Stephen Hoge said the company was in touch with the U.S. Food and Drug Administration (FDA) and other regulators on the design of the study, which should make the filings a smooth process.

“We expect those to be relatively straightforward discussions and submissions,” he said.

It is not known if countries including the United States will adopt annual fall boosters, similar to the flu market.

He said while he expects the FDA to authorize the vaccine, it is not known if the U.S. Centers for Disease Control and Prevention will recommend the shot for all adults or for a subset of the population such as older people.

Chief Executive Stephane Bancel said the company had been ramping up manufacturing of the new booster with an aim to be ready to ship as early as August.

In the study, which did not measure vaccine effectiveness, the booster, the vaccine generated greater antibodies against the Alpha, Beta, Gamma, Delta variants compared to the original shot.

Reporting by Manas Mishra in Bengaluru; Editing by Arun Koyyur