The Perfect Enemy | Memo to Dems: Don’t play chicken with aid for Kyiv - The Boston Globe
Skip to content
May 28, 2022
Read Time:3 Minute 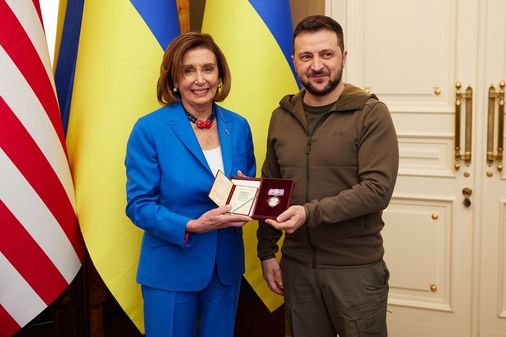 House Speaker Nancy Pelosi can’t stand side by side with Ukrainian President Volodymyr Zelensky and vow to support that nation’s fight for its sovereignty against Russian invaders “until the fight is done,” and then return home and engage in political gamesmanship over a $33 billion aid package for Ukraine.

In a life-and-death fight where every day counts in cities and villages now turned into battlegrounds, there is no room for the leisurely pace of congressional funding debates and surely no time for the usual Capitol Hill logrolling. Not here, not now, and not on this issue.

The aid package filed by President Biden last week includes $20 billion in military assistance, $8.5 billion in economic assistance to help pay for the country’s energy and health care costs at a time when its economy is shattered, and $3 billion in humanitarian aid.

The military aid will take the form of armored vehicles, advanced air defense systems, and anti-armor weaponry — a point Biden chose to emphasize with a visit scheduled for Tuesday to the Lockheed Martin plant in Alabama where Javelin anti-tank weapons are made.

Biden pointed to the choice ahead in stark terms when he made the announcement last week, noting, “The cost of this fight is not cheap, but caving to aggression is going to be more costly if we allow it to happen. We either back Ukrainian people as they defend their country, or we stand by as the Russians continue their atrocities.”

Pelosi, on the heels of her trip to Kyiv, also said this is no time for the United States and its allies to back down in the face of threats by Vladimir Putin.

“Do not be bullied by bullies. If they make threats, you cannot back down. That’s my view of it,” Pelosi said. “You cannot fold to a bully.”

What is not helpful, however, are repeated indications that Pelosi will move to tie the Ukraine aid package, which seems to have solid bipartisan support, to $10 billion in additional COVID-19 relief, a measure far less popular with congressional Republicans.

Senate Republicans have been filibustering the COVID-19 relief bill unless Democrats agree to an amendment to reimpose the Trump-era Title 42 rule, which allows US officials to turn away asylum-seekers at the border due to the pandemic.

“To avoid needless deaths in the United States and around the world, I urge the Congress to include this much needed, life-saving COVID funding as part of this supplemental funding request,” Biden wrote.

What Ukraine doesn’t need right now as it fights for its very survival as a nation is to be part of a high-stakes game of political chicken in Washington.

Separately, Biden has also proposed legislation that would allow US authorities not simply to freeze the assets of Russian oligarchs already under sanctions, but also to liquidate those assets and donate the proceeds to Ukraine.

“We’re going to seize their yachts, their luxury homes, and other ill-begotten gains,” Biden promised.

His proposal follows a bill filed in March by Massachusetts Representatives Seth Moulton and Jake Auchincloss— the Yachts for Ukraine Act, to empower the administration to sell off the seized property and use the proceeds to help rebuild Ukraine.

After civil liberties groups raised concerns about due process in connection with that legislation, the administration vowed to include measures that would call for some level of judicial review.

The US Treasury puts the value of already blocked vessels and aircraft at about $1 billion, along with hundreds of millions of dollars in frozen bank assets belonging to sanctioned Russians.

That would hardly make a dent in some $84 billion in infrastructure damage done to Ukraine thus far during this war, as estimated by the Kyiv School of Economics. But US action might prompt other Western nations where Russian oligarchs have parked their assets to follow suit. If nothing else, it would send a pointed message about the consequences of an unprovoked invasion of another sovereign country.

But right now, Ukraine needs more than messages and more than photo-ops at US munitions plants or in the center of Kyiv.

A recent poll found overwhelming support from the American people for helping Ukraine — a rare point of agreement in a still sharply divided nation. That ought to be the takeaway for the Biden administration and for Pelosi and congressional Democrats. Don’t muddy the political waters here. Don’t mess this one up.