Joe Rogan declares he’s NOT a conservative and tells critics who claim he’s a secret Republican to ‘suck my d***’: Hugely popular podcast host says he’s a ‘bleeding-heart liberal’ on some issues like gay marriage and social welfare

By Paul Farrell For Dailymail.Com

Rogan was interviewing fellow comedian Andrew Schulz when he made the remarks.

The comedian’s personal politics have long been a source of discussion and debate as he has welcomed controversial figures from the alt-right movement as well as COVID-19 deniers on his influential show.

Speaking about politics on his Spotify podcast, Rogan said: ‘Like I was on welfare as a kid. I think it’s important. I think having a social safety net is crucial. We should help each other. We’re supposed to be one big community. I’m a bleeding-heart liberal when it comes to a lot of s**t.’

Earlier Rogan took aim at Texas Sen. Ted Cruz, who recently said that the US Supreme Court was ‘clearly wrong’ in their decision to affirm gay marriage.

‘It’s not just abortion rights, but now they’re going after gay marriage too, which is so strange to me,’ the comedian said. ‘Gay marriage is not silly. It’s marriage — it’s marriage from people that are homosexual and it’s, for them, it’s important. They want it.’

The former ‘Fear Factor’ host went on: ‘They want to affirm their love and their relationship. And the fact that they’re going after that now almost makes me feel like they want us to fight. They wanna divide us in the best way they can. And this is the best way for them to keep pulling off all the bulls**t they’re doing behind the scenes is to get us to fight over things like gay marriage or get us to fight over things like abortion. It’s just like, why are you removing freedoms?’

Schulz responded by saying: ‘Yes, if you are gonna say that marriage is an important cultural institution to the fabric of America, you can’t remove it from Americans.’ 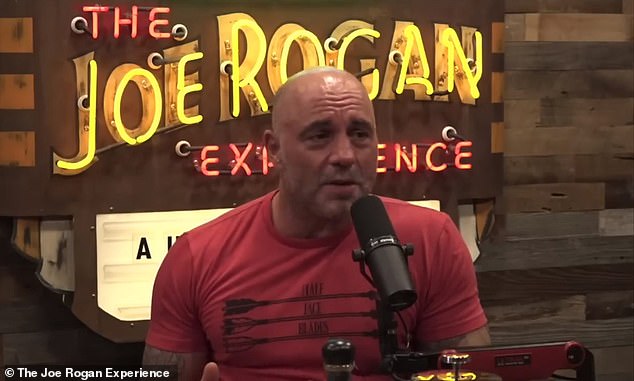 Rogan took aim at Texas Sen. Ted Cruz who recently said that the US Supreme Court was ‘clearly wrong’ in their decision to affirm gay marriage 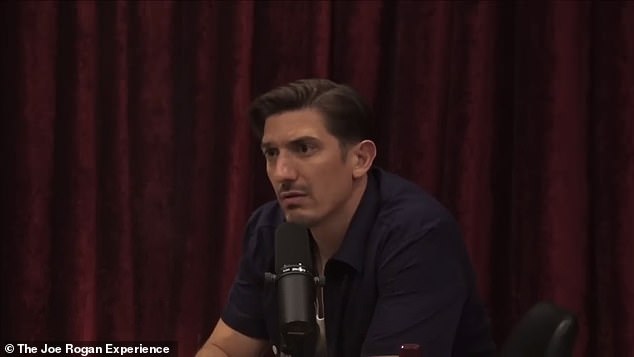 Schulz told Rogan: ‘If you are gonna say that marriage is an important cultural institution to the fabric of America, you can’t remove it from Americans’

Rogan also took aim at those who think they have his politics figured out: ‘People will say like, “Oh, you know, you’re a secret conservative.” Like, you can suck my d**k. You don’t know what the f**k you’re talking about. I’m so far away from being a Republican. Just because I believe in the Second Amendment and just because I support the military and just cause I support police.’

In 2020, Rogan signed a $200 million exclusive deal with Spotify, where his show is hosted. The deal saw music legends like Neil Young and Joni Mitchell pull their music from Spotify due to their disapproval of Rogan’s coverage of the Covid-19 pandemic.

Rogan spoke with comedian Tom Segura about California’s ongoing homeless crisis with Segura commenting that you would get arrested for removing a homeless person’s belongings from a public area. 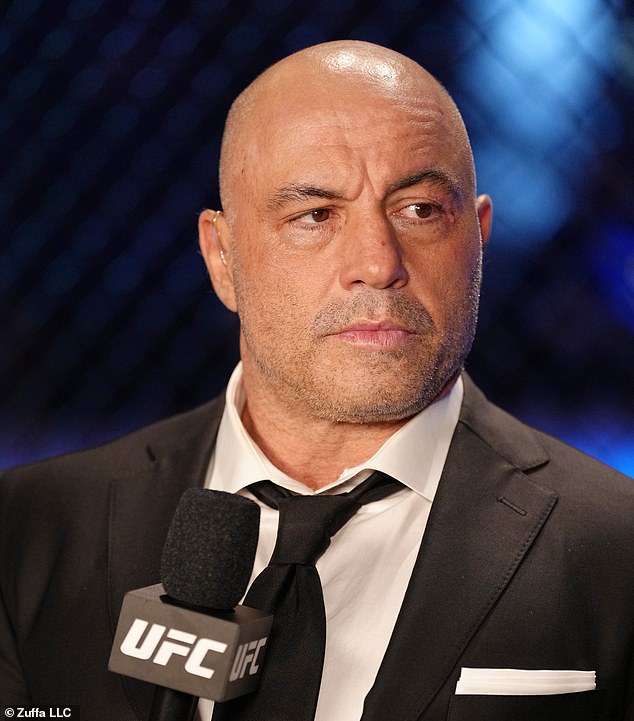 Rogan attracted criticism recently for saying on his podcast: ‘Maybe you should just go shoot the homeless people’

The UFC host responded by saying: ‘You’d get arrested. Hilarious. But, they wouldn’t arrest you if you shot somebody. Maybe you should just go shoot the homeless people.’

In that same interview, Rogan described Canada as a ‘communist’ country. While talking about Prime Minister Justin Trudeau, Rogan said: ‘They’re f**ked. They gotta get rid of that guy.’

Although he conceded: ‘I don’t know how their system works up there. I have zero understanding of their system. I never looked into it at all.’

The concession didn’t stop Rogan from calling Trudeau a ‘f**king dictator’ adding that he felt the Canadian PM was ‘gross’ and a ‘sketchy guy.’

He also accused Trudeau of ‘trying to shut down criticism by saying that all your critics are misogynists and racists.’

Previously, Rogan canceled a Vancouver performance over the country’s requirement that foreign visitors get vaccinated against the Covid-19 virus.

He said at the time: ‘I don’t even think I can get into the country. I’m not vaccinated. I’m not gonna get vaccinated.’ 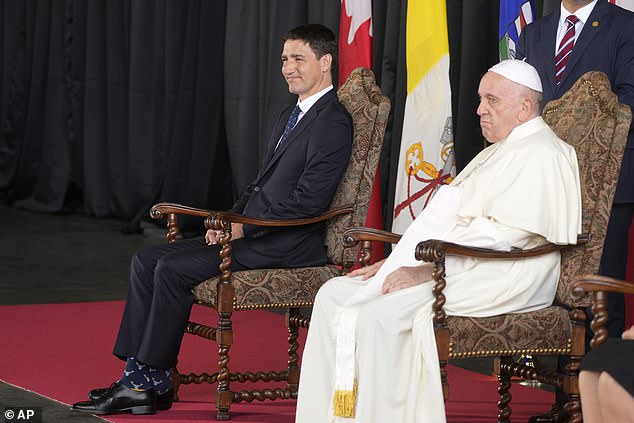 One Canadian citizen wrote following Rogan’s comments: ‘If we have a PM that keeps Fox News and Joe Rogan upset: It’s a good thing.’

YouTube star Liana Kerzner said: ‘Dear Joe Rogan: Trudeau is not a dictator. In fact, he is the leader of a political party who can throw him out at any time, who holds the most seats in a minority parliament which could fall at any time. He doesn’t even have veto power.’

Back in 2012, Rogan endorsed libertarian Ron Paul for president, in 2016 he voted for Libertarian Party candidate Gary Johnson.

Early in the 2020 election cycle, Rogan encouraged Rep. Tulsi Gabbard to run for president. Closer to the election, Rogan endorsed Senator Bernie Sanders. When Sanders dropped out, Rogan said that he was more likely to vote for Donald Trump than for Joe Biden.

During the campaign, Rogan publicly questioned Biden’s senility. In one instance, Trump retweeted a message from Rogan in which the comedian spoke about Biden’s mental fitness.

On the night of the election, Rogan said that he voted for libertarian Jo Jorgensen.

With a view toward 2024, Rogan has said Florida Gov. Ron DeSantis ‘would work as a good president.’ 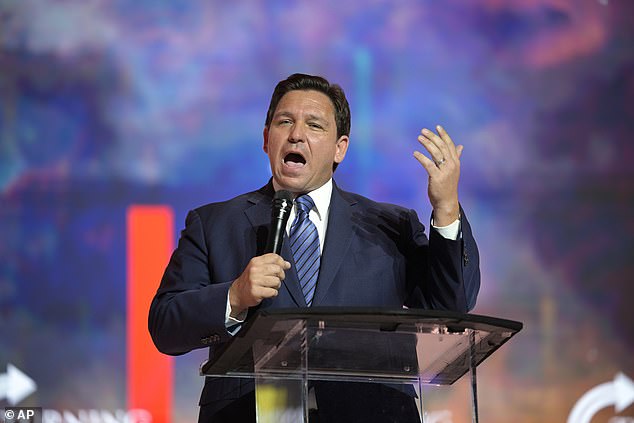 Rogan has said Florida Gov. Ron DeSantis ‘would work as a good president’ 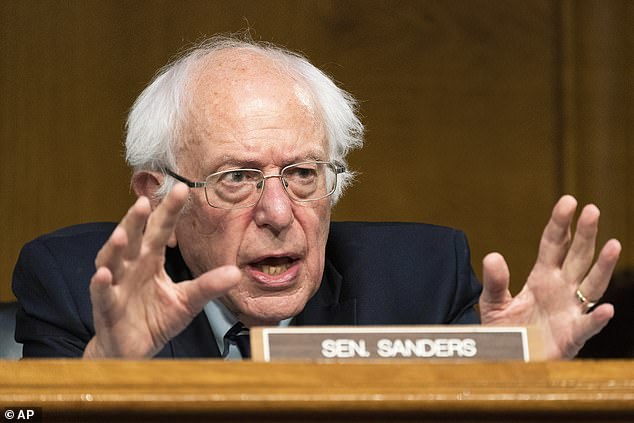 The podcaster had also made comments saying that he has refused to have ex-President Donald Trump on his show.

Rogan declared on an episode of ‘The Lex Fridman Podcast’: ‘I have had the opportunity to have him on my show, more than once, and I have said no every time. I don’t want to help him, I’m not interested in helping him.’

The feeling from the Trump camp appears to be mutual. In July, Trump’s former advisor Steve Bannon said on an episode of his ‘War Room’ podcast: ‘You’ve got Joe Rogan over there trash talkin’ Trump, ‘I don’t want to give Trump any platform’ – no offence, he doesn’t need your platform. He doesn’t need your low-information voters, okay? Trump deals with high-information people.’