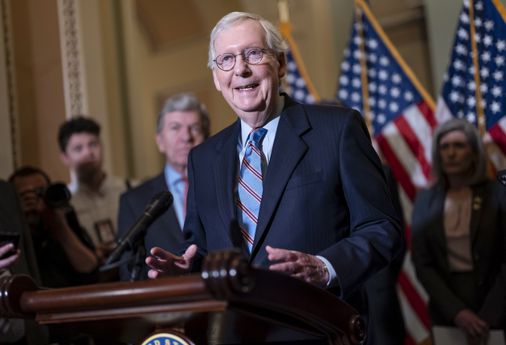 The Kentucky Republican said he hoped an outline of the accord, released Sunday by 10 Democrats and 10 Republicans, would be translated into legislation and enacted. McConnell’s backing was the latest indication that last month’s gun massacres in Buffalo and Uvalde, Texas, had reconfigured the political calculations for some in the GOP after years of steadfastly opposing even incremental tightening of firearms curbs.

“If this framework becomes the actual piece of legislation, it’s a step forward, a step forward on a bipartisan basis,” McConnell told reporters. He said the proposal “further demonstrates to the American people” that lawmakers can work together on significant issues “to make progress for the country.”

McConnell’s comments were striking, coming five months before midterm elections in which Republicans hope to win control of the Senate and seem likely to win a majority in the House. For years, GOP candidates could risk their careers by defying the views of the party’s loyal gun-owning and rural voters, who oppose moves seen as threatening their ownership and use of firearms.

McConnell seemed to suggest that backing this gun measure might even help some Republicans’ prospects in November. While he said senators should take a position “based upon the views of their states,” he said Senator John Cornyn, a Texas Republican and chief architect of the deal, presented GOP polling data at a closed-door senators’ lunch saying support among gun owners for the agreement’s provisions is “off the charts, overwhelming.”

The plan would for the first time make the juvenile records of gun buyers under age 21 part of required background checks. Money would be sent to states for mental health and school security programs and for incentives to enforce or enact local “red flag” laws that let authorities win court approval to temporarily remove guns from people considered dangerous.

Senators and aides hope to translate their broad agreement into legislation in days, in hopes that Congress could approve it before leaving for its July 4 recess. Both sides acknowledge that is a difficult process that could encounter disputes and delays.

Some Republicans expressed unhappiness with the plan Tuesday, with much criticism aimed at its encouragement of “red flag” laws. Nineteen states mostly dominated by Democrats and the District of Columbia have them, but Republicans have blocked efforts in Congress to pass federal legislation on the subject.

“If we’re not going to pass a federal red flag law, and we shouldn’t, why would we incentivize states to do something that we think is a bad idea?” said Senator Kevin Cramer, Republican of North Dakota.

“I don’t know what we can do in view of the Constitution,” Senator Richard Shelby, Republican of Alabama, said of the overall agreement, citing the Second Amendment right to bear arms.

Cornyn defended the plan’s “red flag” proposal, saying it would create no national requirements for such laws. He said it gives “every state regardless of whether it has a ‘red flag’ law or not” money for programs aimed at improving public safety and helping troubled people get assistance. Texas does not have a “red flag” law.

McConnell made it clear he would only go so far in restricting firearms.

Asked by a reporter why the federal minimum age is 21 for tobacco sales but 18 to buy rifles, he answered, “Good try.” He added that including state and local juvenile records in background checks for the youngest guy buyers was “a step in the right direction.”

The alleged shooters in Buffalo, where 10 people were killed, and Uvalde, where 19 school children and two teachers were slain, were both 18 years old, a common profile for many mass shooters.

The state’s Court of Appeals said there was no “substantial constitutional question” that would warrant its intervention in the matter following an intermediate appellate court’s ruling last month enforcing a subpoena for Trump’s testimony.

The court also dismissed a motion by Trump’s lawyers to stay the subpoenas, saying that doing so would be “academic,” since it wasn’t taking up the former president’s appeal in the first place.

Trump and his two eldest children, Ivanka Trump and Donald Trump Jr., agreed last week to answer questions under oath starting July 15 unless the Court of Appeals decided to step in.

A message seeking comment on Tuesday’s ruling was sent to Trump’s lawyer. Alan Futerfas, a lawyer for Ivanka and Don Jr., declined comment. A message was also left with a spokesperson for New York Attorney General Letitia James.

The appellate division of the state’s trial court ruled May 26 that the Trumps had to undergo a deposition, upholding a lower court’s ruling that James’s office had “the clear right” to question Trump and certain other figures in his company, the Trump Organization.

James has said her three-year investigation has uncovered evidence that the Trump Organization exaggerated the value of assets including skyscrapers, golf courses, and even Trump’s Manhattan penthouse to get loans, insurance, and tax breaks for land donations.

If McMaster wins the general election in November and completes the term, he will become the longest-serving governor in the state’s history.

The governor defeated Harrison Musselwhite, a trucker and former businessman who said he was running to allow open carry of guns, prevent any government vaccine mandates, and eliminate state income taxes.

McMaster mostly let his governing do his campaigning, reminding voters how the state’s economy is booming and how he tried to carefully tailor COVID-19 restrictions when the pandemic started.

In Maine, Paul LePage, the Republican whose two terms as governor were dominated by his offensive rhetoric and combative leadership, faced no sizable opposition and coasted to the Republican nomination for governor. That sets up a fierce general election campaign against Democratic incumbent Governor Janet Mills.

The matchup revives a rivalry between LePage and Mills that dates to the days when he was governor and she was attorney general.