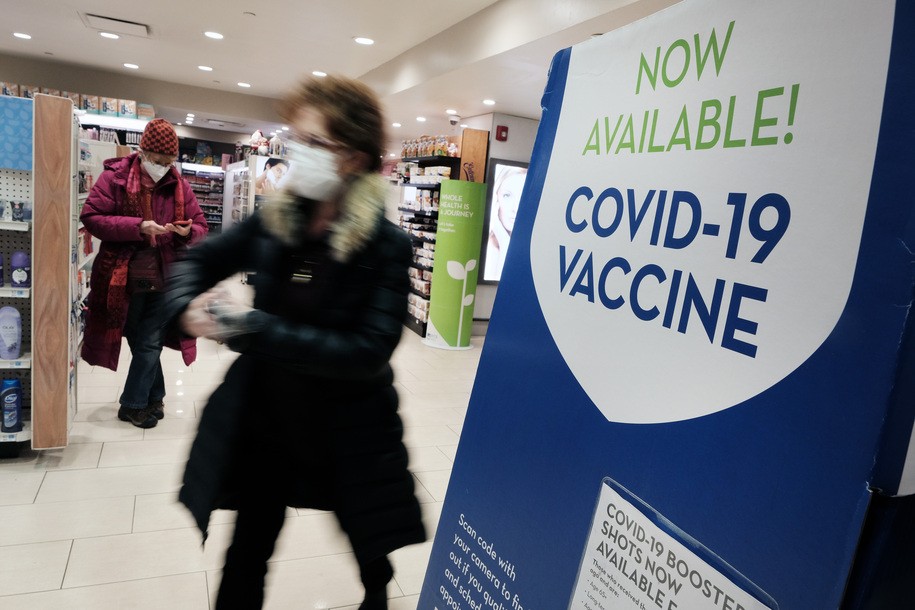 Some scientists have argued that a 10-fold increase from baseline would probably be clinically meaningful, and the Pfizer vaccine triggered a change of that magnitude in adults.

In adults older than 55, the new booster provoked a stronger immune response against BA.4 and BA.5 than the original booster, although it was unclear whether the difference, measured in laboratory tests, would provide a meaningful difference in how well people were protected.

The bad news? Hardly anyone is getting the new booster. According to the CDC, only 8.4% of those eligible for the bivalent booster have actually received it. If you include only adults, the picture isn’t that much better—just 9.9% have taken the shot. And with a bad flu season apparently brewing, this has public health officials concerned about a coming phlegm-aggedon. Indeed, Yasmin Tayag, a science editor for The Atlantic, notes that we could be running into a buzzsaw as winter approaches.

What will happen next is hard to predict, Michael Osterholm, an epidemiologist at the University of Minnesota, told me, but now is a bad time for booster rates to be this low. Conditions are ripe for COVID’s spread. Protection is waning among the unboosted, immunity-dodging variants are emerging, and Americans just don’t seem to care about COVID anymore, Osterholm explained. The combination of these factors, he said, is “not a pretty picture.” By skipping boosters, people are missing out on the chance to offset these risks, though non-vaccine interventions such as masking and ventilation improvements can help too.

That’s not to say that the immunity conferred by vaccination and the initial boosters is moot. Earlier doses still offer “pretty substantial protection,” Saad Omer, a Yale epidemiologist, told me. Not only are eligible Americans slacking on booster uptake, but lately vaccine uptake among the unvaccinated hasn’t risen much either. Before the new bivalent shots came around, less than half of eligible Americans had gotten a booster. “That means we are, as a population, much more vulnerable going into this fall,” James Lawler, an infectious-diseases expert at the University of Nebraska Medical Center, told me.

I have to admit, I slept on the bivalent booster for a bit too long, but I finally got my shot (along with a flu vaccine) on Wednesday of this week. Why did I dawdle? Well, for one thing, I’m the foremost needle chicken in North America, and to some extent, COVID-19 has become background noise. I haven’t really worried about dying of COVID since the original vaccines rolled out, and so most of my fretting energy (frenergy?) has been redirected toward worrying about the future of American democracy. I also figured I could time my vaccine so the effects are strongest when I visit Wisconsin in December to create a new liberal beachhead in our ongoing War on Christmas.

Admittedly, those aren’t great reasons for delaying a shot that could protect me—and, just as importantly, others—from infelicitous outcomes like long COVID or, well, death, but I’m apparently not alone. All along, I’d been keeping at least one ear to the ground for pandemic news—and not the ear that grew out of my forehead after my first COVID shot; I’ve never been able to get that one to work—but my primary focus just hasn’t been on COVID-19 lately. That appears to be true for many of us.

The good news is, it’s not too late to blunt the effects of the coming cold, flu, and COVID-19 season. As Tayag notes in her Atlantic story, a big vaccine push now could have a significant impact in the coming months:

In theory, this souped-up booster would make a big difference heading into another wave. In September, a forecast presented by the Advisory Committee on Immunization Practices (ACIP), which advises the CDC, showed that if people get the bivalent booster at the same rate as they do the flu vaccine—optimistic, given that about 50 percent of people have gotten the flu vaccine in recent years—roughly 25 million infections, 1 million hospitalizations, and 100,000 deaths could be averted by the end of March 2023.

So how about this? Sometime this weekend, while buckling in before Tuesday’s mental meat grinder, make your bivalent booster appointment. And while you’re at it, go ahead and schedule a flu shot. Then let out a breath, knowing that we can still accomplish great things if enough of us pull in the right direction.

Speaking of … while you’re on hold with your pharmacy or health clinic, be inspired by what young people are doing to protect their rights and the future of democracy:

We’re deep in the home stretch before the all-important midterm elections, but it’s not too late to Get Out the Vote. Let’s do this, people!

Check out Aldous J. Pennyfarthing’s four-volume Trump-trashing compendium, including the finale, Goodbye, Asshat: 101 Farewell Letters to Donald Trump, at this link. Or, if you prefer a test drive, you can download the epilogue to Goodbye, Asshat for the low, low price of FREE.