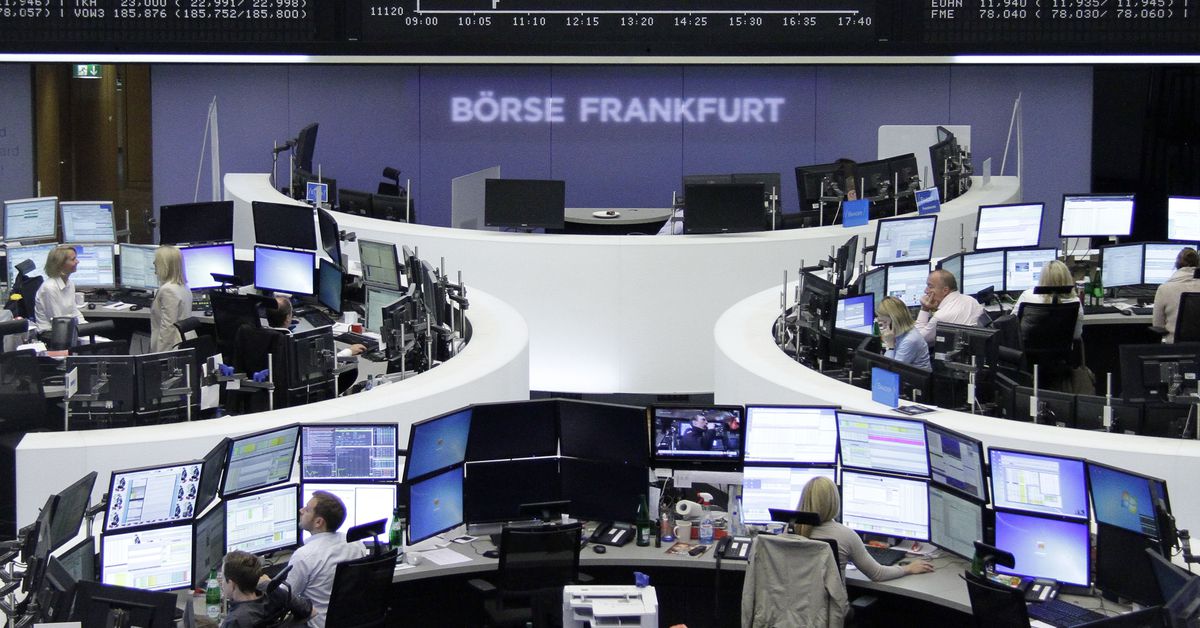 LONDON, July 26 (Reuters) – European shares moved sideways and bond markets rallied on Tuesday as some disappointing earnings, the prospect of another super-sized U.S. interest rate hike and a looming gas crisis all kept the mood cautious.

Asia had been buoyed overnight by a new Chinese plan to tackle its property crisis and as tech giant Alibaba sought a primary listing in Hong Kong , but Europe and Wall Street could not keep it going.

But they were offset by broader recession fears as European Union leaders agreed to cut their country’s gas usage and as 6% (UBSG.S) dive in UBS shares hit the banking sector. read more

“The key question we have as these earnings come out is how much pricing power do these (consumer facing) firms have,” said Diamond Hill international equities portfolio manager Krishna Mohanraj, referring to the pressures of higher inflation.

In the United States, Walmart’s shares were down around 9% in pre-opening bell trading after it had slashed its forecasts on Monday due to those exact issues. read more .

General Electric (GE.N) rose 6% though after growth in its aviation business helped it beat estimates. Coca-Cola (KO.N) gained 1% as it raised forecasts. In Europe too, Unilever, which makes everything from laundry detergent to ice cream, raised its forecasts owing to what its CEO Alan Jope said had been “strong pricing to mitigate input cost inflation”. read more

European Union countries approved a weakened emergency plan to curb their gas usage on Tuesday after striking compromise deals to limit the cuts for some countries as they brace for further Russian cuts in supply. read more

The Kremlin also warned again that state monopoly Gazprom (GAZP.MM) would reduce its supply further this week due to another maintenance issue on the Nord Stream 1 pipeline. Flows will fall to 33 million cubic metres per day – a halving of the current, already reduced level. read more

That sent European gas prices up almost 10% and they are now more than 450% higher than a year ago, although still some way below the record highs hit shortly after Russia began its invasion of Ukraine in February.

“It is game of cat and mouse,” said Christopher Granville Managing Director of EMEA & Global Political Research at TS Lombard.

“The Russia position will always be that it will continue to supply the gas within the constraints caused by the West’s sanctions. But they will then find lots of problems that suddenly pop up.”

Investors are also awaiting a likely 75 basis point Federal Reserve interest rate increase on Wednesday – with markets pricing about a 10% risk of a larger hike, as well as waiting to see whether economic warning signs prompt a shift in rhetoric.

The International Monetary Fund is set to publish its closely-watched world forecasts later too which are expected to point to even slower growth and higher inflation.

“We are leaning to the view that 75 bps is most likely but won’t be the end unless they see some demand destruction and some tempering of inflation,” said John Milroy, an investment adviser at Ord Minnett.

NOT SO HIGH TECH

Global tech giants Microsoft and Google are both reporting after the Wall Street session later, followed by Facebook owner Meta tomorrow and Apple and Amazon on Thursday.

It adds up to more than $7.5 trillion of market cap, Deutsche Bank’s Jim Reid pointed out. “Although with these 5 stocks being down between around -13% (Apple) YTD to around -50% (Meta), with the other three down around -20 to -25%, this figure would have been closer to $10 trillion at the start of the year.”

Chinese stocks had jumped after reports the country would set up a fund of up to $44 billion to help property developers. read more

In currencies, the dollar was pushing for recent milestone highs as uncertainty continued to swirl around the interest rate and economic outlook. /FRX

The euro tumbled back to $1.0139 from $1.0250 hemmed in by all the uncertainty over Europe’s energy security. read more

Oil prices rose further on expectations Russia’s reduction in natural gas supply to Europe could encourage a switch to crude, with Brent futures last up 1.5% at $106.68 a barrel and U.S. crude up 1.6% at $98.21 a barrel. read more

Benchmark 10-year Treasury yields tumbled to 2.73% from 2.87% at the end of last week. Germany’s benchmark 10-year bond yield has slumped back under the psychological 1% threshold too as Europe’s recession worries have intensified.

Tuesday also marked the 10-year anniversary since then ECB President Mario Draghi pledged to do “whatever it takes” to prevent a break up of the euro currency project.