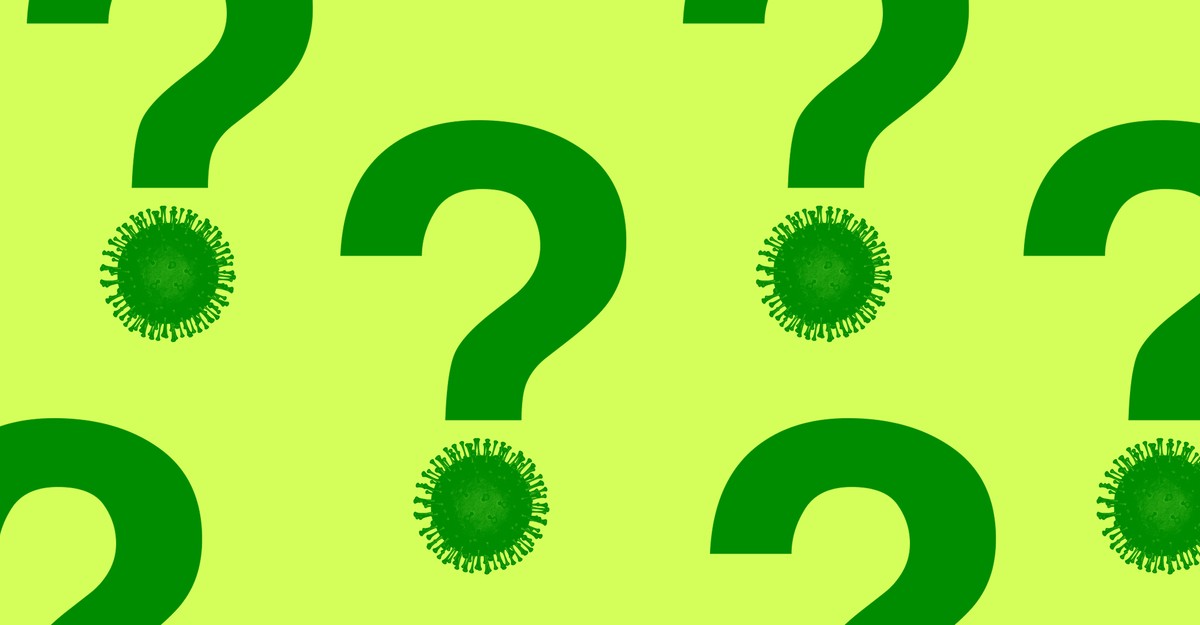 The past two and a half years have been a global crash course in infection prevention. They’ve also been a crash course in basic math: Since the arrival of this coronavirus, people have been asked to count the meters and feet that separate one nose from the next; they’ve tabulated the days that distance them from their most recent vaccine dose, calculated the minutes they can spend unmasked, and added up the hours that have passed since their last negative test.

What unites many of these numbers is the tendency, especially in the United States, to pick thresholds and view them as binaries: above this, mask; below this, don’t; after this, exposed, before this, safe. But some of the COVID numbers that have stuck most stubbornly in our brains these past 20-odd months are now disastrously out of date. The virus has changed; we, its hosts, have as well. So, too, then, must the playbook that governs our pandemic strategies. With black-and-white, yes-or-no thinking, “we do ourselves a disservice,” Saskia Popescu, an epidemiologist at George Mason University, told me. Binary communication “has been one of the biggest failures of how we’ve managed the pandemic,” Mónica Feliú-Mójer, of the nonprofit Ciencia Puerto Rico, told me.

Here, then, are five of the most memorable numerical shorthands we’ve cooked up for COVID, most of them old, some a bit newer. It’s long past time that we forget them all.

At the start of the vaccination campaign, getting dosed up was relatively straightforward. In the United States, a pair of Pfizer or Moderna shots (or just one Johnson & Johnson), then a quick two-week wait, and boom: full vaccination, and that was that. The phrase became a fixture on the CDC website and national data trackers; it spurred vaccine mandates and, for a time in the spring and summer of 2021, green-lit the immunized to doff their masks indoors.

Then came the boosters. Experts now know that these additional shots are essential to warding off antibody-dodging variants such as the many members of the Omicron clan. Some Americans are months past their fifth COVID shot, and the nation’s leaders are weighing whether vaccinated people will need to dose up again in the fall. To accommodate those additions, the CDC has, in recent public communications, tried to shift its terminology toward “up to date.” Katelyn Jetelina, an epidemiologist at the University of Texas Health Science Center at Houston, prefers that phrase, because it “allows for flexibility” as recommendations evolve. It also more effectively nods at the range of protection that vaccination affords, depending on how many doses someone’s gotten and when their most recent dose was.

But fully vaccinated has been hard to shake, even for the CDC. The agency, which did not respond to requests for comment, maintains that the original definition “has not changed,” and the term still features heavily on CDC websites.  Maybe part of the stubbornness is sheerly linguistic: Up to date means something different to everyone, depending on age, eligibility, health status, and vaccine brand. Fully vaccinated is also grabby in a way that up to date is not. It carries the alluring air of completion, suggesting that “you’re actually done with the vaccine series,” maybe even the pandemic overall, Jessica Malaty Rivera, an epidemiologist and adviser at the Pandemic Prevention Institute, told me. All of this may be partly why that uptake of boosters—which sound optional, even trivial, compared with the first two shots—remains miserably low in the U.S.

Since the pandemic’s early days, Americans have been taught to benchmark our risk of exposure to the virus by two metrics: proximity and duration. Get within six feet of an infected person for at least 15 minutes over a 24-hour period, and congratulations—you’ve had a “close contact.” Even now, the CDC advises that this kind of encounter should trigger 10 full days of masking and, depending on your vaccination status and recent infection history, a test and/or a five-day quarantine.

Thresholds such as these made some sense when researchers weren’t yet savvy to the virus’s main modes of transmission, and at least some efforts were made to contact trace, Jetelina told me. “You needed some metric so you could call people.” Nearly all contact-tracing attempts, though, have long since fizzled out. And scientists have known for years that SARS-CoV-2 can hitch a ride in bubbles of spittle and snot small enough to drift across rooms and remain aloft for hours, especially in poorly ventilated indoor spaces. Pathogens don’t slam up against a magic wall “at the six-foot mark,” Malaty Rivera said. Nor will viruses bide their time for 14 minutes and 59 seconds before launching themselves noseward at 15 minutes on the dot. Exposure is a spectrum of high to low risk” that factors in, yes, proximity and duration, but also venue, ventilation, mask quality, and more, Popescu said. “It’s not just ‘exposed’ or ‘not exposed.’”

The CDC acknowledges that SARS-CoV-2 can move beyond six feet—but the scientific justification behind its guidelines on preventing transmission was last updated in May 2021, just before the Delta variant bamboozled the nation. Since then, the coronavirus has gotten even more contagious and crafty—better at transmitting, better at dodging the antibodies that people raise. “Even passing interactions and encounters have led to people becoming exposed and infected,” Malaty Rivera said, especially if people are indoors and a ton of virus is being volleyed about. And yet, the mantra of “six feet, 15 minutes” has stayed. Schools have even cut the guidance in half, counting close contact only when children are less than three feet apart.

In the beginning, isolation numbers loomed large: Infected people had to wait at least 10 days after their symptoms began, or after their first positive test result, before they could reenter the world. Then, at the start of 2022, the CDC slashed the duration of isolation to just five days for people with mild or asymptomatic cases (regardless of vaccination status), as long as they kept masking and avoided travel through Day 10. You didn’t even need a negative test to go about your life.

This guideline has been perpetually behind the times. For much of 2021, truncating isolation might have made sense for vaccinated people, who clear the coronavirus faster than folks who haven’t gotten their shots, especially if negative tests confirmed the safety of exit. But only after the rise of Omicron did the guidance change—and it was based mostly on pre-Omicron data. The shift in guidance arrived just in time for the coronavirus to bust it wide open. After nearly two years of COVID symptoms starting around the time people first began to test positive, test positivity with Omicron and various iterations is now quite frequently lagging the onset of illness. Many people now report strings of negative results early in their symptom course, then positives that persist into their sixth, seventh, or eighth day of sickness or later, raising the possibility that they remain quite contagious past when formal isolation may end. “I find it impossible to believe you can end isolation without testing,” Malaty Rivera said.

And yet, many workplaces have already embraced the five-day rule with no exit test, using that timeline as the basis for when employees should return. With masks largely gone, and paid sick leave so uncommon, defaulting to five days could drive more transmission—in some cases, likely inviting people back into public when they’re at their infectious peak.

According to CDC guidelines, people who have caught SARS-CoV-2 don’t need to test or quarantine if they’re exposed again within 90 days of their initial infection. This recommendation, which appeared in the pandemic’s first year, was designed in part to address the positives that can crop up on PCR tests in the weeks after people stop feeling sick. But the CDC also touts the “low risk of subsequent infection for at least 6 months” on one of its pages, last updated in October 2021. Reinfections “can occur” within 90 days, but that’s “early.”

That framing might have once been pretty solid, before the era of widespread at-home antigen testing—and before the rise of antibody-dodging variants, Popescu said. However, reinfections have gotten more common, and far closer together. They were happening even in the era of Delta; now, with so many immunity-evading Omicron offshoots at the helm, and masks and other mitigation matters mostly vanished, they’ve become a quite-frequent fixture. The number of people who have caught the virus twice within just a matter of weeks “has grown so much that we should forget these windows,” Malaty Rivera said. Even the Department of Health and Human Services secretary recently tested positive twice in the same month.

And yet, with these guidelines in place, many people have been lulled by the promise of rock-solid post-infection immunity, assuming that a new crop of symptoms are “anything but COVID,” Malaty Rivera said. That thinking is not only allowing a growing share of contagious coronavirus cases to go undetected—it’s also stymieing the study of reinfection dynamics writ large. Many studies, including those cited by the CDC in its guidance, won’t even count reinfections earlier than 90 days. But the 90-day number, Malaty Rivera said, is no longer relevant. “It has to be deleted from people’s minds.”

As obsolete as some of America’s COVID calculations may be, updates aren’t a universal win, either. Take the most recent iteration of mask recommendations from the CDC. The agency would like everyone to mask indoors if their county hits a “high” COVID community level, a threshold that is met only when the region logs 200 or more infections per 100,000 people in one week, and if local hospitals see more than 10 COVID-related admissions per 100,000 people in a week, or fill at least 15 percent of their inpatient beds. Currently, roughly 10 percent of U.S. counties are in the “high” category.

But waiting to just suggest masks at those levels of transmission and hospitalization—not even require them—leaves far too much time for widespread disease, disability, even death, experts told me. A bar that high still lets long COVID slip through; it continues to imperil the vulnerable, immunocompromised, and elderly, who may not get the full benefit of vaccines. Case rates, Malaty Rivera pointed out, are also a terrible yardstick right now because so many people have been testing at home and not reporting the results to public-health agencies.

In Puerto Rico, Feliú-Mójer and her colleagues have been struggling to reignite enthusiasm for mask wearing as their community battles its second-largest case wave since the start of the pandemic. A better system would flip on protections earlier—taking a preventive approach, rather than scrambling to react. But that’s a difficult stance for jurisdictions to assume “when the official map looks so green and a little yellow,” Feliú-Mójer said. It’s the problem of thresholds striking once again: No one cares to take up arms anew against the virus until the damage is already done. That’s made the pandemic that much easier to tune out—it’s either here in full force, the thinking goes, or it’s totally gone. If only the calculus were that simple.