The pair is now taking their grievances to court after the league rejected their requests for exemptions from the vaccine mandate.

“We took part in a 30-minute interview. A lawyer in the NBA office interviewed us and then went back to the NBA management, and then they came to the conclusion that I wasn’t a religious person, I guess,” Mauer said Monday on “Fox & Friends First.”

Mauer, who has been a practicing Catholic since being baptized nearly 60 years ago, said, despite the firing, his faith has never changed and never will.

Phillips said his own request for an exemption was met similarly when the league rejected his “sincere” application.

“[I] submitted a religious exemption that was definitely sincere and then, after an interview on my own also, the NBA came to the conclusion after quite some time that it was not sincere…” he told Todd Piro.

“When they were interviewing my clients and all the others for a 30-minute period of time, when my clients and others who are not allowed to be represented by counsel, I guess their nose[s] grew several inches like Pinocchio’s and, lo and behold, they found that they weren’t being sincere and truthful,” he said.

“It’s a sham exemption. It’s not a real exemption. They granted none based upon parsing through statements over a long period of time…” 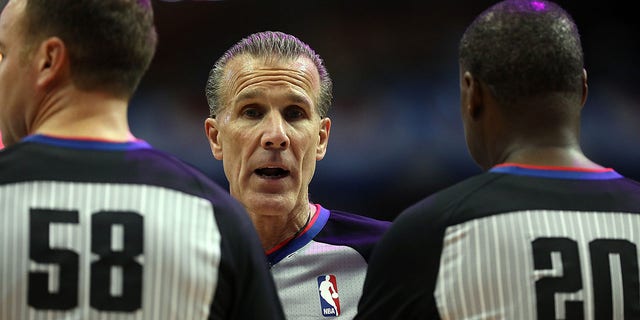 He claimed that the league took a number of requests “out of context,” jumping to conclusions that some applicants were lying about their religious beliefs.

Reuters reported that the plaintiffs filed a lawsuit against the league in the U.S. District Court, Southern District of New York on Saturday.

The former referees said that, despite the NBA lifting the exemption requirement for the season, they were never reinstated.

Taylor Penley is a production assistant with Fox News.