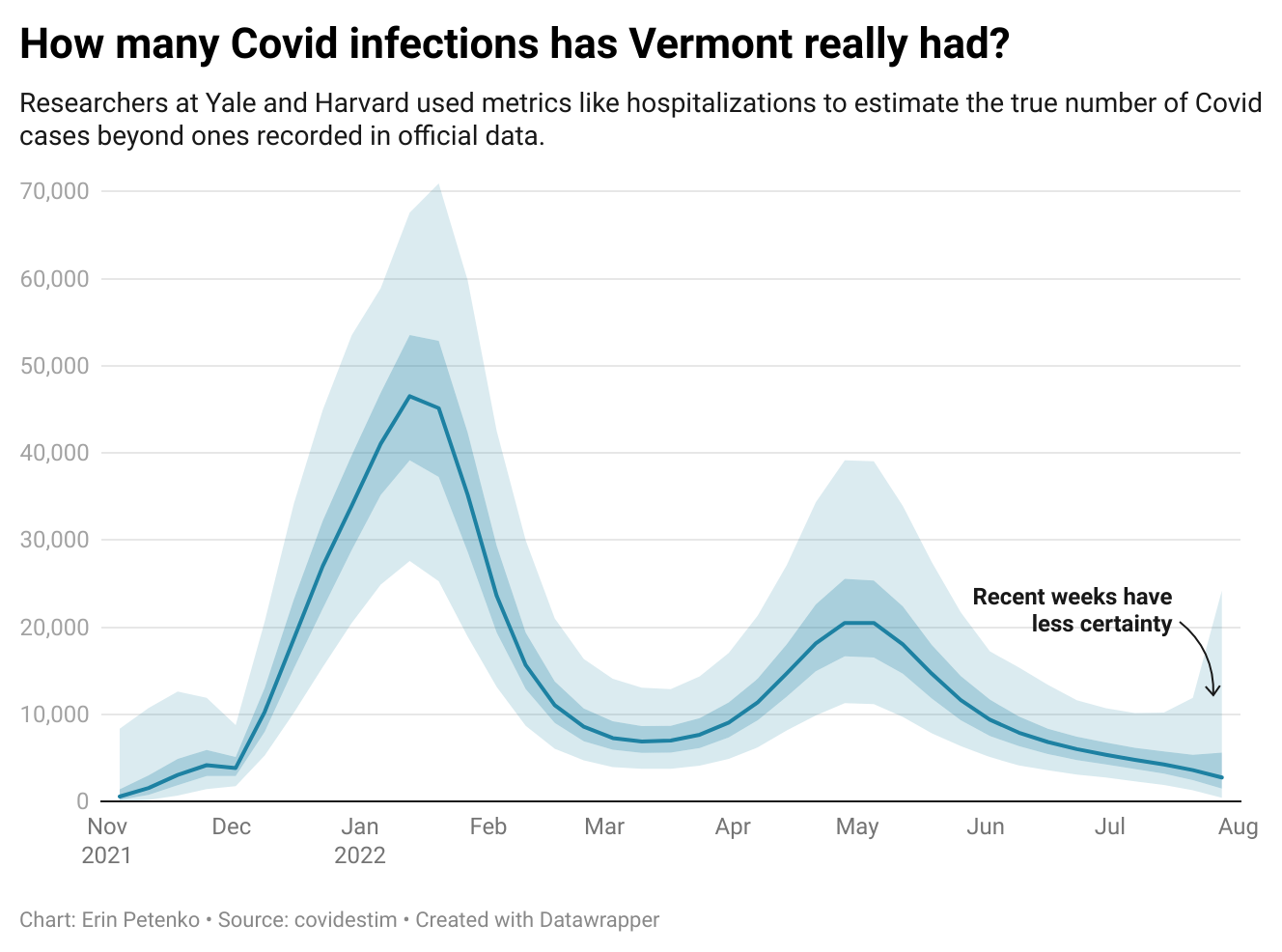 A project by Yale and Harvard researchers includes new estimates of how many Vermonters have gotten sick with Covid-19, showing the extent to which traditional reporting on case counts and PCR tests may be failing to capture the spread of the virus.

The researchers behind the tool, called Covidestim, used data on hospitalizations, reported case counts and the dynamics of the Omicron variant to project backward, estimating the number of infections in recent weeks.

And those estimates are fairly high: For the most recent week of data, ending July 28, Vermont had a median estimate of 2,700 infections in a week, more than five times higher than the official case count of about 500.

Theodore Cohen, a Yale University researcher who worked on the project, said it began in May 2020 and was inspired by the knowledge that case counts did not reflect the full reality of Covid.

“Our modeling framework took those pieces of imperfect information that had delays built into them, and tried to back into estimates of, sort of, the real-time numbers of infections that were happening,” he said.

The researchers took the site offline in December 2021 when vaccines and the Omicron variant shifted the dynamics of the disease, lowering its severity but also evading immunity in new ways, Cohen said. The team relaunched the tool last week.

Before Omicron took hold last winter, Vermont officials also warned that case counts represented only a slice of the total number of Vermonters who had gotten sick. People who did not get tested because they did not show symptoms, and people who used rapid antigen tests rather than PCR tests, would not appear in state Department of Health data.

Cohen said the tool now relies mostly on hospitalization data, which is more accurate than case counts. But that data comes at a delay because of the time it takes for severe complications of Covid to develop. The most recent weeks of estimates have a much larger margin of error to reflect the uncertainty.

But the Covid estimates still allow for a greater understanding of how the virus has affected Vermont and the country at large. Cohen, for example, finds it interesting to observe the spread of BA.2 and BA.5 in different regions in recent months using the time slider on the homepage.

“​​This is something that I just didn’t have any feel for until we were able to produce these estimates,” he said.

The tool has positive news for Vermonters: The estimated number of infections today is far lower than it was three months ago, at the height of the BA.2 wave.

The “reproduction number” — the average number of people who will become infected from a single case — was below 1 in the past four weeks, which suggests that Covid cases will continue to decline, according to the estimates.

That aligns with the health department’s most recent report that Covid levels in the state were low. Other areas of the country, particularly southern states, currently have a far higher infection rate, according to the tool.

Cohen said his team’s work was similar to projects launched early in the pandemic that tried to project the future of Covid waves — only this time, they’ve projected the present.

“As the data has gotten weaker, it becomes harder and more important to understand, as best as we can, current times and the recent past,” he said.