The Perfect Enemy | Disney properties pushed progressive rhetoric at every turn, from spat with DeSantis to ‘The View’
Skip to content
December 2, 2022
Read Time:7 Minute

The Walt Disney Company’s shocking Sunday night announcement that Bob Iger would return as chief executive has put a rekindled emphasis on the far-left moments that occurred under Bob Chapek, with everything from ABC’s “The View” to theme parks pushing progressive politics.

Disney’s board announced that Chapek, who succeeded Iger in 2020, stepped down from the position to make room for Iger to unretire after a tumultuous era that saw the Mouse House develop a reputation as a liberal company that only caters to fellow liberals.

Fox Business Network host Charles Payne tweeted that Disney “went woke,” so shareholders “got broke” under Chapek. While Disney has been considered progressive for years, a new spotlight was put on the company’s politics in 2022 when it famously feuded with Florida Republican Gov. Ron DeSantis over the Parental Rights in Education bill that liberals dubbed the “Don’t Say Gay” bill. 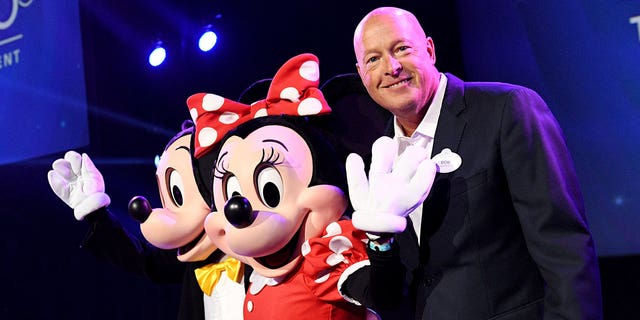 While Disney has been considered progressive for years, a new spotlight was put on the company’s politics in 2022 when it famously feuded with Florida Gov. Ron DeSantis over the Parental Rights in Education bill that liberals dubbed the “Don’t Say Gay” bill.  (Image Group LA / Disney via Getty Images)

Democrats falsely claimed the bill banned any discussion pertaining to being gay in the state’s schools. Instead, it prohibited classroom instruction on “sexual orientation” and “gender identity” with children in third grade or younger,” or in a manner that is not age-appropriate or developmentally appropriate for students in accordance with state standards.”

Chapek spoke out against the bill and announced Disney would donate $5 million to LGBTQ groups. ABC News, which is owned by Disney, mentioned the political feud in a number of segments. One such segment featured Orlando Democrat Anna Eskamani, who called Florida Republicans’ move on Disney both “punitive and petty.” She added it was being punished for merely “standing up” for Disney LGBTQ park cast members.

Disney-owned ESPN, which has been widely criticized for embracing liberal talking points, stunned the sports world earlier this year when broadcasters Carolyn Peck and Courtney Lyle went silent during a Women’s NCAA Women’s basketball broadcast to protest the bill.

“Normally at this time we would take a look back at the first half, but there are things that are bigger than basketball that need to be addressed at this time. Our friends, our family, our co-workers, the players and coaches in our community are hurting right now,” Lyle told viewers during halftime of a game between South Carolina and Richmond. 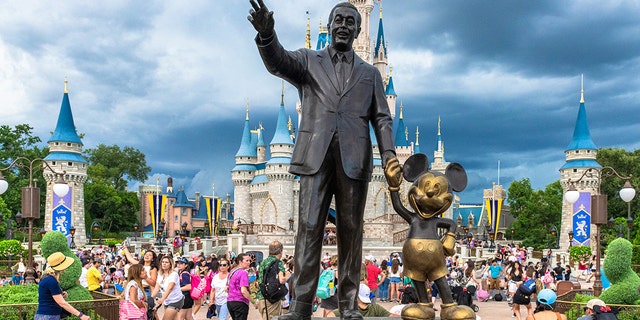 “Our LBGTQIA+ teammates at Disney asked for our solidarity and support, including our company’s support, in opposite to the parental rights education bill in the state of Florida, and similar legislation across the United States,” Lyle continued.

“The threat to any rights is a threat to all human rights, and at this time, Courtney and I are going to take a pause from our broadcast to show our love and support for our friends, our families and our colleagues,” Peck said.

Lyle and Peck then went silent for roughly two minutes, even as play continued. ESPN’s Elle Duncan also spoke out about the bill and conducted a similar moment of silence during the network’s women’s college basketball studio show.

The drama surrounding Disney’s reaction to the Parental Rights in Education bill is hardly the only example of the company embracing far-left ideology under Chapek. Last summer, the company began omitting any use of the phrase “ladies and gentlemen, boys and girls” from its parks.

Disney corporate president Karey Burke said in another video that she would like to see at least 50% of Disney’s characters in the future identify as LGBT or a racial minority. 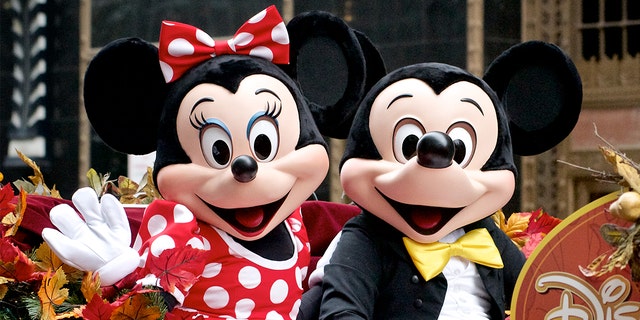 Disney corporate president Karey Burke said in a leaked video that she would like to see at least 50% of Disney’s characters in the future identify as LGBT or a racial minority.

The company has gone out of its way to promote inclusion, even changing the name of characters in Disney’s Bibbidi Bobbidi Boutique from “Fairy Godmothers” to “Fairy Godmothers in Training.”

The Disney blog, Streaming the Magic, noted: “This way cast members that might not identify as female can still be part of the process to dress up and style the children without having to refer to themselves as a female Disney character.”

“Lightyear,” a 2022 movie from the “Toy Story” franchise, featured a kissing scene between two female characters that critics believed pushed a pro-gay agenda.

In late June, Disney+ released a new show called “Baymax!” centered around a robot from the 2014 movie “Big Hero 6.” The new release was quickly criticized by parents and conservative voices online when the show’s third episode focused on a young girl named Sofia, who is in school when she gets her first menstrual period.

During the episode, the health robot then offers to go to the grocery store to buy feminine products. In the following sequence, Baymax asks a woman which tampon she recommends, causing a flurry of grocery store patrons to chime in with their tampon of choice.

DISNEY EXPANDING OPERATIONS TO 10 ANTI-GAY COUNTRIES, REGIONS AS THEY GO ‘WOKE’ IN THE US

Some patrons recommend eco-friendly tampon options, while others urge Baymax to buy pads with wings on them. One patron appears to be a transgender man, wearing a shirt with the transgender flag, also chimes in with a recommendation.

Critics online asserted that Disney was conveying the idea that men could also have periods, a point of contention that often crops up as people opine the parameters of discourse surrounding the intersection of women’s rights and transgender rights.

In 2021, Lucasfilm, a production company of Disney responsible for the Star Wars IP, revealed that actress and former MMA fighter Gina Carano had been fired from “The Mandalorian,” a spinoff show from the sci-fi universe.

A Lucasfilm spokesperson said in a statement at the time that Carano’s “social media posts denigrating people based on their cultural and religious identities are abhorrent and unacceptable.”

Carano received numerous death threats, and negative comments, calling her a White supremacist, a bigot, and a racist over past tweets about the COVID-19 vaccine, voter fraud concerns in the 2020 presidential election, and her refusal to specify her pronouns on Twitter.

The actress was fired shortly after a tweet in which she compared the political divisions in the American politics to those of Nazi Germany and compared conservatives to the Jewish people.

DISNEY CEO HITS BACK AT ALLEGATIONS COMPANY IS ‘TOO WOKE’

After being let go from the company, Carano pointed to “The Mandalorian” lead actor Pedro Pascal as an example of the double standard present in Hollywood. Pascal previously compared undocumented children held in cages at the border to Jews in concentration camps. He was not fired over his comment.

In addition, ABC News’ “The View” is considered one of the more liberal programs in all of network news, and co-hosts Whoopi Goldberg, Joy Behar and Sunny Hostin regularly mock conservatives and push far-left talking points. Author Brigitte Gabriel tweeted that “liberal privilege is real” earlier this year when Goldberg was only handed a two-week suspension over controversial Holocaust remarks but both Carano and Roseanne Barr were fired by Disney over tweets that were deemed offensive.

Iger was Disney’s CEO from 2005 to 2020, then served as the company’s executive chairman through 2021 before retiring. Iger will now return as CEO for two years. It’s unclear if he will do anything to make the company less progressive.

Brian Flood is a media reporter for Fox News Digital. Story tips can be sent to brian.flood@fox.com and on Twitter: @briansflood.