The Perfect Enemy | Did COVID-19 Impact Sharks And Rays In French Polynesia - Forbes
Skip to content
May 26, 2022
Read Time:3 Minute 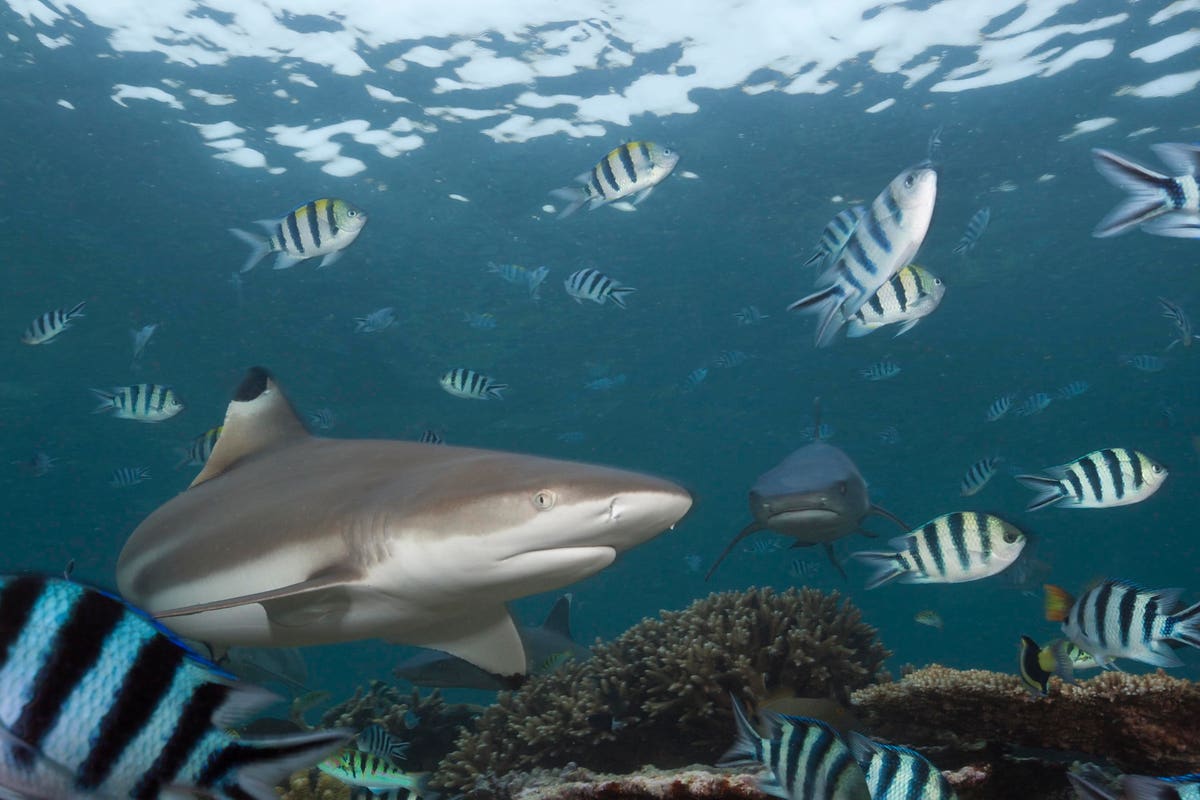 Where were you when the world came to a screeching halt due to the global COVID-19 lockdowns? Were you in your car, listening to health officials explain what was going on in the radio? Were you at home, sat down in front of the TV with an incredulous look in your face? Were you on holiday, frantically wondering how you would get home?

If you were the blacktip reef sharks (Carcharhinus melanopterus) and pink whiprays (Pateobatis fai) in French Polynesia, you were out on the Tiahura Marine Reserve waiting to be fed.

Located in the North-West of the island of Mo’orea (also known as Moorea), this lagoon site is surrounded by shallow coral reefs nestled in a sandy bottom that allows for people to easily stand and observe (or feed!) two elasmobranchs species: blacktip reef sharks (Carcharhinus melanopterus) and pink whiprays (Pateobatis fai). Blacktip reef sharks are small and, like the name denotes, commonly found in shallow inshore waters near reefs. Easily recognized by the coloration of their fins, they are found throughout the tropical Indo-West and Central Pacific. Pink whiprays are found in the tropical Indo-west-central-Pacific where groups of these pink-colored rays are seen resting on sand flats and sandy areas near reefs. Both are globally declining in numbers and are listed on the IUCN Red List as “Near threatened” and “Vulnerable,” respectively.

In French Polynesia, these two species share their habitat in the lagoons. It might have something to due with the daily and year-round provisioning of both these animals that has been going on officially in Tiahura since the 1980s. Fed fish discards and frozen squid, this feeding of elasmobranchs accounts for 145,000 tourists per year through French Polynesia’s six different islands; Mo’orea island accounts for an average of 40,000 people per year. They know at what time food is coming and tend to be there a few hours before even the people show up!

Before the lockdown, the abundances of these elasmobranchs were defined in previous studies. Lead author Clémentine Séguigne of the Laboratoire d’Excellence “CORAIL,” in Mo’orea led a team that, through both drone footage and underwater counting, was able to track the abundance of these two species before, during, and after reopening and thus investigate the impact of provisioning on wild elasmobranch populations. They found that the absence people (and food) during this long period resulted in almost total desertion of the site by the elasmobranchs. Pretty much they said, “No food here anymore? Right – time to search for another place!” Yet, the fascinating thing they discovered was that one day prior to the reopening of the island (and resuming of many recreational activities), some individuals of both species reacted to the single acoustic stimulus of an engine boat.

“Our findings suggest that sharks and rays can remember stimuli for periods exceeding 6 weeks (i.e., we observed a positive reaction in both species). This result confirms the resilience of conditioning as described following deliberate cessation of artificial stimuli in previous studies for other elasmobranch species,” the authors explained. “The fact that both species were attracted with a single sound stimulus supports previous findings on Pink whipray, white sharks (Carcharodon carcharias), and Port-Jackson sharks (Heterodontus portusjacksoni), showing a possible cognitive connection of two linked stimuli. In this study, the noise of the engine appears to be an important stimulus that attracts highly conditioned blacktip reef sharks and pink whiprays.”

Did things ever go back to ‘normal’ here? Yes, but slowly. During the first two weeks after reopening, the abundance of both species remained at reduced levels comparable to those previously observed. Pre-lockdown abundance levels (approximatively 15 individuals for sharks and 10 for rays) were considered restored about one and two months after reopening for blacktip reef sharks and pink whiprays, respectively. “These findings improve our capacity to better understand the potential effects of artificial provisioning tourism on the abundance of elasmobranchs by showing that conditioning is resilient for several weeks, suggesting that intermittent interruption of elasmobranchs feeding would not really help to decrease its impact on animal welfare,” the authors concluded.