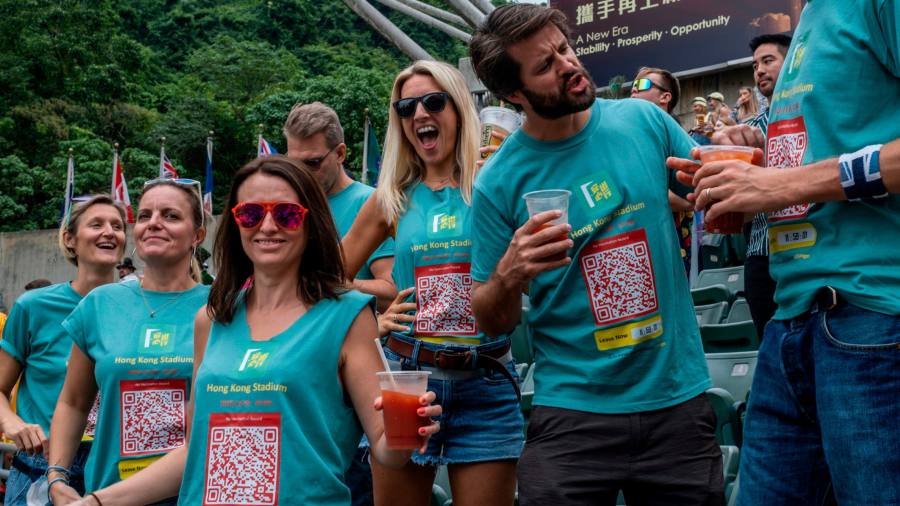 For some of those in the raucous South Stand at the Hong Kong Sevens rugby tournament this weekend, it was if the city’s past three years of Covid restrictions and political crackdowns had never happened.

Just like earlier years at the Asian financial hub’s flagship sporting and business networking event, the South Stand was packed with under-40s expatriates, many decked out in fancy dress and drinking oversized pints.

“It’s been 1,300 days since the last sevens [and] I feel like I’m back when I’m here,” said one banker and Hong Kong resident. Around him, derivatives traders dressed as Super Mario and insurance brokers in Hawaiian shirts battled to remain vertical among a sea of human flamingos.

“Hong Kong is back, write that in your report,” said another spectator, Australian expat film producer Charles Edwards.

The return of the tournament, along with a series of financial conferences last week, was touted by the government as marking Hong Kong’s return to the global stage after nearly three years of hotel quarantine for international visitors and enforced confinement for domestic Covid cases. In mainland China, Beijing continues to enforce a rigid zero-Covid policy that makes it all but impossible for outsiders to enter the country.

“Hong Kong always bounces back, better than ever,” John Lee, the city’s leader, said at one of the conferences, the “global financial leaders investment summit”. The forum attracted the heads of several international investment banks, including Goldman Sachs and Morgan Stanley, to the city for the first time since the pandemic started.

Under the city’s latest “0+3” Covid restrictions, travellers no longer have to do hotel quarantine but are barred from restaurants and bars for the first three days of their trip. Everyone must still wear masks outdoors and tourists face a week of tests. If they are found to be positive they must isolate.

But Covid remains a pervasive topic in the city, so much so that other popular Sevens outfits included T-shirts displaying positive RAT tests or iphones showing a red Covid-positive code on the city’s health app.

Among the smattering of tourists attempting to enter the tournament was Renier du Plessis, a 38-year-old businessman from Johannesburg, who arrived in Hong Kong on Thursday but was barred from the venue because his health code was still amber.

“I am going to take the lift to the highest building and . . . watch the Rugby Sevens there,” he joked as he left the stadium, one of at least nine tourists in the same position.

As many as 27,000 out of 34,000 tickets were sold as of Friday, which organisers said was substantial given the restrictions. Robbie McRobbie, the Hong Kong Rugby Union chief executive, said the rules had limited overseas attendance.

“Having three days when you can’t go to bars and restaurants, to be honest, is a big deterrent,” he said.

The city also offered exemptions for certain overseas attendees to last week’s event, such as bank CEOs, only serving to highlight how the rules are hampering business.

Paul Chan, the city’s financial secretary who caught Covid in Saudi Arabia days before the summit and tested positive on arrival in Hong Kong, shocked local residents after he still spoke at the main financial forum last Wednesday in person. While officials waved signs asking people to wear masks in the stadium, very few could be spotted among the crowd.

Overshadowing the forum and any concerns over Hong Kong’s Covid restrictions was growing unease about the direction of China after Xi Jinping consolidated power his already firm hold on power at the Communist party congress last month. Xi also used the occasion to reiterate the importance of national self-reliance rather than the market economy.

“It’s very hard to read whether China wants foreign investors anymore,” said a veteran fund manager between sips of house lager and cheers for the game under way below. “This is the first time I have seen investors be so negative about China.”

Nearby a senior Chinese businessman joked that he was just happy not to be in jail — a reference to crackdowns on the mainland against high-flying businessmen over the past two years. “In the past money made politics, now politics makes money,” he opined.

The corporate boxes were a more subdued affair than previous years when they were known for vodka ice bars and models moonlighting as waitresses.

Hong Kong stalwarts such as HSBC, Standard Chartered, Swire and Jardines had suites on the “executive level” while among the other international banks only ANZ, Citigroup, Société Générale, Goldman Sachs and BNP Paribas had similar corporate boxes this year.

Among those present were many Hong Kong and China bulls talking up the story and delivering broadsides against the west and post-Brexit Britain. “Some western companies have been having their best years ever in China . . . I can’t believe the disconnect between these companies and the western media and politicians,” said a senior investment banker.

As festivities on Saturday evening wrapped up, fans began heading towards the city’s bars, a procession of inflatable pandas and weary Dalmatians trundling off into the night to the sound of police begging them to “wear your mask properly”.

As an executive in a squid game suit put it as he got on the bus home: “It’s almost like we’re back in the real world.”