The Perfect Enemy | Covid is still causing havoc around the world
Skip to content
August 17, 2022
Read Time:6 Minute
This is the weekly edition of CNN’s coronavirus newsletter. Look out for your roundup every Wednesday. If you haven’t subscribed yet, sign up here.
With labor shortages already paralyzing airports and wrecking the hospitality sector, a wave of worker absences due to sickness is the last thing the economy needs.
The latest wave of infections is driven by the most infectious and transmissible variant identified so far — BA.5.
Based on the sequencing data reported to the World Health Organization (WHO), about half of all coronavirus cases globally are now caused by this variant. In the US, BA.5 accounts for about 80% of new cases, according to the latest data from the US Centers for Disease Control and Prevention (CDC).
The variant is keeping experts on their toes because of its ability to evade immunity and cause reinfection.
“It is important that we continue to talk about Covid,” WHO’s technical lead on Covid-19 Maria Van Kerkhove said in a briefing on Tuesday, stressing the need to keep up the efforts to vaccinate the most vulnerable.
“People who are more likely to die, and this is consistent across all countries, are people who have not been vaccinated.”
According to WHO, about a third of the new cases reported last week were in Europe, a third in the Western Pacific region and 25% in the Americas.
The latest surge is having a huge impact on the economy.
The International Monetary Fund slashed its world economic forecast on Tuesday, as it predicted major slowdowns in the three biggest economies: The United States, China and Europe.
It said that Covid-19 lockdowns in China have continued to hamper the economy, triggering a slowdown that “has been worse than anticipated.”
A recent example of the crushing effect of Covid on the economy is the gaming hub of Macao.
Governed by China, Macao is subject to its “zero Covid” policy, which means that the region has been under stay-at-home restrictions since last week. Gaming accounts for more than 80% of government revenue and is Macao’s most important industry. Because casinos are also part of the shutdown, the government revenue is plummeting.
Then there’s the impact of long Covid. A study published Wednesday by the Institute for Fiscal Studies, a London-based economic think tank, said one in 10 UK workers with long Covid have stopped working while sick, which means an estimated 110,000 workers are currently missing from the country’s labor market.

YOU ASKED. WE ANSWERED.

Q: Can I get BA.5 if I had Covid-19 before?
A: Yes — now more than ever. The Omicron BA.5 subvariant, which is dominant in the US, is causing more reinfections than earlier strains, a new analysis has found.
Gene sequencing company Helix looked at how many times the same individuals were testing positive with Covid-19 and found that, of around 300,000 US infections since March 2021, the number of reinfections had nearly doubled from 3.6% during the BA.2 wave in May to 6.4% during the BA.5 wave in July.
Shishi Luo, associate director of bioinformatics and infectious disease at Helix, called it “a jump,” saying that their latest data showed that “the fraction of all infections that are reinfections have increased quite a bit.”
Luo thinks this could be happening for a range of reasons, such as mutations to BA.5 and waning immunity, adding that “statistically speaking, you’re more likely to get reinfected the longer it has been since your last infection, just based on the data we’ve generated.”
Send your questions here. Are you a health care worker fighting Covid-19? Message us on WhatsApp about the challenges you’re facing: +1 347-322-0415.

READS OF THE WEEK 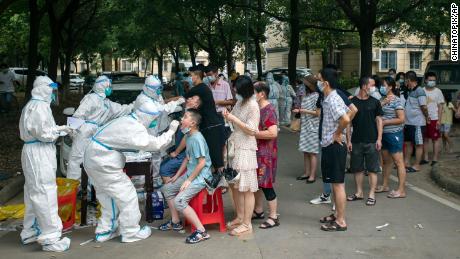 Animals sold at Wuhan market most likely started Covid-19 pandemic, studies find
Two studies looking into the origins of the Covid-19 pandemic were published on Tuesday in the journal Science. Both arrived at the same conclusion: The Hunan Seafood Market in Wuhan, China, was likely the epicenter for the virus that rippled across the world.
One study did a spatial and environmental analysis, finding that, while the “exact circumstances remain obscure,” the coronavirus was most likely present in live animals sold at the market in 2019. The other study looked at when the virus was first transmitted from animals to humans, suggesting it was around November 18, 2019 that infections first appeared in people who had a direct connection to the market.
Kristian Andersen, the co-author of the first study and professor in the Department of Immunology and Microbiology at Scripps Research, said while the studies do not disprove the lab leak theory, they were persuasive enough to change his mind. “I was quite convinced of the lab leak myself … (but) based on data and analysis I’ve done over the last decade on many other viruses, I’ve convinced myself that actually the data points to this particular market,” he said.
On Wednesday, Wuhan shut down a district of nearly a million people in the latest action of China’s zero-Covid policy after four asymptomatic Covid cases were detected. Authorities in the Jiangxia district said it would enforce three days of “temporary control measures.”
Over 40% of parents to young kids will not get them vaccinated
According to a survey by the Kaiser Family Foundation, 43% of parents to under-5s in the US say they will not get them vaccinated against Covid-19 — the highest figure since the KFF’s Vaccine Monitor survey began asking the question, Virginia Langmaid reports.
Only 17% of parents of children between 6 months and 5 years old say their child has been vaccinated or will be as soon as possible, the study found. Another 27% say they will wait to see how effective they are in other children, and 13% said they will only vaccinate if required to do so for school or childcare.
Concerns over side effects are a major reason for the hesitancy. More than 8 in 10 parents of unvaccinated young children said they were concerned over side effects, a concern shared by many parents of vaccinated children too.
The US Food and Drug Administration authorized Covid-19 vaccinations in children as young as 6 months in mid-June.
Top Chinese officials including President receive domestic vaccine amid public concern over safety
Chinese President Xi Jinping and other top state officials have been given domestic Covid-19 vaccines, the ruling Communist Party said in a rare public statement aimed at encouraging booster uptake in the nation.
Deputy head of the National Health Commission (NHC) Zeng Yixin said on Saturday that “all China’s incumbent state and party leaders” have been vaccinated against Covid-19 with domestically made shots, referring to top officials at the national and deputy national level — a category that includes Xi, Premier Li Keqiang and other senior leaders.
Information regarding the health of Chinese leaders is seldom disclosed to the public; Xi’s vaccination status had previously not been revealed.
Nearly 90% of China’s eligible population has been fully vaccinated. But among over 80-year-olds, only 61% have been fully vaccinated and 38.4% have received boosters, the NHC added.
While it seems like summer romances and frolicking in the sea and sun may once again be drowned out by the latest Covid-19 variant, we can still make it a season to remember.
CNN’s Scottie Andrew suggests some ways to fill the long, hot days, from heading to the beach to catching the first rays during the sunrise when it will be cooler and less crowded, to ice cream dates complete with cones in places with ample outdoor seating.
But wherever you are, remember to protect yourself from the scorching heat we’ve been seeing in the US and around the world. Take an umbrella — or a makeshift parasol if you will — and live your best life in a Bridgerton-esque world.
Read more here.
Facebook
Twitter
Pinterest
LinkedIn
Email
Tags: Coronavirus, Vaccines