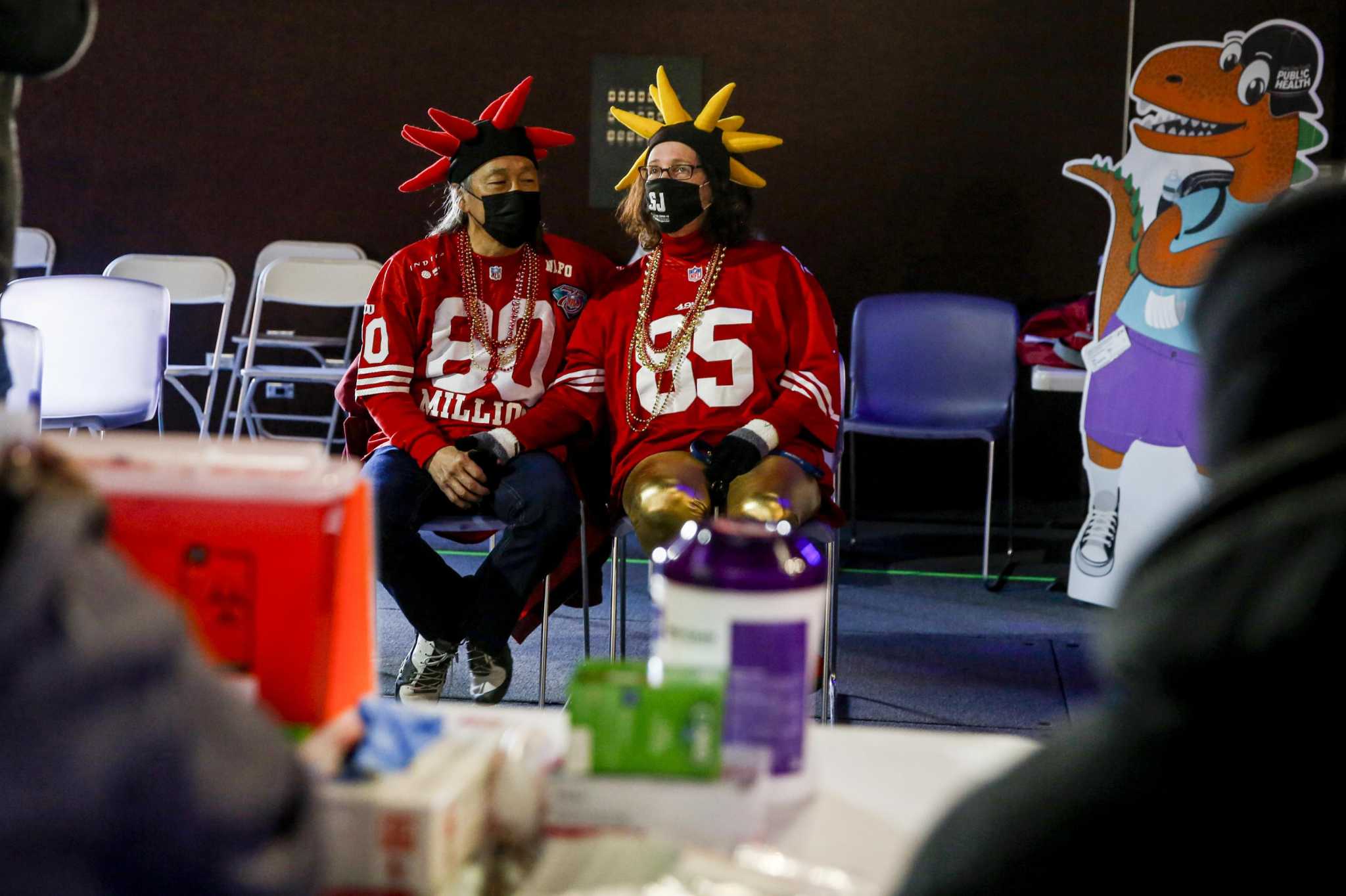 The U.S. Food and Drug Administration’s vaccine advisory committee on Tuesday recommended the agency grant emergency use authorization for the COVID-19 vaccine made by Novavax. If approved, it would become the fourth coronavirus vaccine available in the U.S., along with the Pfizer, Moderna and Johnson & Johnson versions. California’s chief justice, Tani Cantil-Sakauye, has tested positive for COVID-19 and has mild symptoms, court officials say.

CDC forecasts up to 4,200 additional COVID-19 deaths by end of June

There will be up to 4,200 new COVID-19 deaths in the U.S. in the week ending July 2, based on forecast models used by the U.S. Centers for Disease Control and Prevention. California could add nearly 700 deaths to its total, based on the models, moving closer to 95,000 cumulative pandemic casualties The national ensemble predicts that the number of new daily confirmed COVID-19 hospital admissions will remain stable, with up to 11,100 new confirmed COVID-19 hospital admissions likely reported on July 1. The U.S. is now averaging about 291 COVID deaths a day. Nearly 4,069 Americans are being hospitalized daily with COVID-19, a 16% increase from the prior seven-day average. The country is averaging 104,511 new cases a day, up from an average of 94,260 new cases a day last week.

San Francisco’s new budget eliminates funding for multiple community coronavirus test sites in some of the city’s hardest-hit neighborhoods, the Mission and Bayview districts. “Our health programs would close in the next 30 days,” Ivan Corado-Vega, manager for the Latino Task Force, told ABC. Community leaders say with the city experiencing another surge of cases and hospitalizations, the results of the cuts could be devastating. “At our testing sites, we are seeing double-digit positive rates. At both of our sites here in the Mission. For the Excelsior site, we are seeing positive rates in the 20s, so COVID is here,” said Corado-Vega. San Francisco Board of Supervisors President Shamann Walton said shutting down the testing sites is “devastating to our communities of need.” Mayor London Breed’s office blamed state and federal officials for the lack of resources: “There will be less funding overall for our COVID response in our upcoming budget. But the mayor’s budget still includes $57 million for San Francisco’s ongoing COVID response in the upcoming budget, including $3 million for community hubs.”

ESPN’s full crew of announcers will return Wednesday to call Game 3 of the NBA finals between the Golden State Warriors and Boston Celtics, following a COVID-19 outbreak among the networks on-air talent. Mike Breen will return to play-by-play duties after missing the first two games of the Finals, as well as Game 7 of the Eastern Conference finals, according to media reports. NBA reporter Adrian Wojnarowski, missed the first two games, will also be back in the booth, along with commentator Jeff Van Gundy, who missed Game 1 and returned in time for Game 2.

People will keep getting reinfected with COVID-19 as new variants emerge, data show

A growing number of people are experiencing reinfection with COVID-19, according to an ABC analysis of health department data from all 50 states. More than 1.6 million cases of reinfection have been reported across 24 states since data collection began, data show, with New York, Maine and California, reporting over 200,000 reinfection cases each. There are also an increasing proportion of people who have been reinfected two times and more – some in rare instances even five times. Health officials said the true tally of reinfections is likely significantly higher due to lack of reporting and home testing. “Studies suggest that reinfection with SARS-CoV-2 with the same virus variant as the initial infection or reinfection with a different variant are both possible,” the Centers for Disease Control and Prevention acknowledged in its updated COVID guidance last month. Health officials added that there is growing concern that newer variants such as BA.4 and BA.5 may be better to escape immunity. “Each new variant and subvariant and sub-subvariant is going to have different ability to break through prior immunity, and prior immunity from vaccination and infection is so variable between individuals,” Dr. Shira Doron, an infectious disease physician and hospital epidemiologist at Tufts Medical Center, told ABC News.

The Biden administration said Wednesday that it plans to divert more than $10 billion in coronavirus relief from test procurement and other efforts as it tries to come up with money to secure the next generation of vaccines and treatments for some high-risk Americans, the Associated Press reports. The White House said it has been left with “no choice” but to cut back on orders of at-home rapid tests that have supported a domestic manufacturing base for the easy diagnostic tests. It also is scaling back funding for research and development of new COVID-19 vaccines and limiting orders of personal protective equipment in an effort to maintain some stockpiles of vaccines and treatments for Americans heading into the winter. “The administration has to act because Congress won’t,” the White House said in a statement. “These trade-offs we are being forced to make because of Congress will have serious consequences on the development of next-generation vaccines, therapeutics and diagnostics, domestic vaccine production capacity, stockpiling of PPE and the procurement of tests and testing supplies for federally qualified and community health centers.”

The number of new coronavirus cases and deaths reported globally fell everywhere last week except the Middle East and Southeast Asia, according to the World Health Organization. “This is clearly a very encouraging trend – increasing vaccination rates are saving lives – but WHO continues to urge caution,” said Tedros Adhanom Ghebreyesus, the director general of the U.N. health agency, in its latest weekly update on the pandemic. “There is not enough testing, and not enough vaccination” As of Wednesday, confirmed cases dropped 12% to more than 3 million and reported deaths declined 22% to about 7,600. The report noted that new weekly cases rose 19% in the Middle East and inched up 1% in Southeast Asia, while the number of deaths increased 7% in the Western Pacific and dropped elsewhere in the world last week.

Few children who got COVID early have antibodies that work against omicron, study finds

A new study from Harvard Medical School, Boston Children’s Hospital and the Food and Drug Administration found that of children who got infected with the coronavirus in 2020 or early 2021, less than 10% retained antibodies that could fend off the omicron variant. Vaccination offers more effective protection than prior infection, according to Adrienne Randolph, a professor of anesthesia and  pediatrics at Boston Children’s Hospital.

Not long after recommending that travelers wear masks to protect themselves against monkeypox, the Centers for Disease Control and Prevention deleted it, according to the New York Times, which cited a statement from the agency: “C.D.C. removed the mask recommendation from the monkeypox travel health notice because it caused confusion.” Nonetheless, masks are worth considering for close contacts and health care workers in areas where there is an outbreak, the agency continues to say.

A new COVID-19 vaccine booster shot developed by Moderna that adds greater protection against the now-dominant omicron variant to the original shot appears successful, the company said in an announcement Wednesday. A preliminary study involving the “bivalent” booster – which targets two viral strains – showed that after one month, it provided higher levels of antibodies that can fight the omicron variant, as well as cross-protection against earlier variants, the drugmaker said. It was not yet clear how long that protection would last. Moderna said the new combo shot is its top candidate for a fall 2022 booster, and the company is submitting its data to regulators with the aim of making it available in late summer

Pfizer, Moderna vaccines for children under 5 could come as soon as June 21

COVID-19 vaccines for children aged 6 months to 4 years old could be available as soon as June 21, Dr. Ahmad Kamal, director of Santa Clara County’s health care system preparedness, told supervisors Tuesday. That tracks with the U.S. Food and Drug Administration’s vaccine advisory committee meeting scheduled for June 15 to review vaccine safety and efficacy data from Pfizer and Moderna for children in this age group. Once that committee recommends authorizing a vaccine, it typically takes a few days for the full FDA to adopt the recommendation and then for the U.S. Centers for Disease Control and Prevention to review and formally recommend the shots to certain age groups. Kamal said he anticipates the federal agencies will authorize the Pfizer and Moderna shots simultaneously for children under 5, the last remaining age group in the U.S. that cannot yet get vaccinated. The county has been allocated about 15,000 doses of pediatric vaccines — which is one-tenth the adult dose — for the first shipment. There are about 100,000 children in this age group in the county.

How to minimize COVID risks while traveling

As people in the Bay Area ramp up plans for summer travel, COVID continues to pose a threat. While most people don’t need to scratch travel dates off their calendars, experts say, it’s wise to keep COVID-19 risks in mind and plan accordingly to make trips as smooth and safe as possible. “People can travel now — people should consider traveling now — but I think that they have to understand they are increasing their risk of exposure and have to be really well versed in doing everything that they can to mitigate risk,” said John Swartzberg, a professor emeritus of vaccinology and infectious diseases at UC Berkeley School of Public Health. Here’s a look at the risks and experts’ advice on how to protect yourself both during travel and while staying at your destination.

The vaccine advisory committee of the U.S. Food and Drug Administration on Tuesday recommended the FDA grant emergency use authorization for the COVID-19 vaccine made by Novavax. The two-dose vaccine, for people 18 and older, is 90% effective at preventing any infection and 100% effective at preventing severe illness, according to clinical data Novavax submitted to the FDA. However, the company did not present data on the vaccine’s effectiveness against the omicron variant, the ancestor of the subvariants that are currently driving new cases in the U.S. The trials were completed last fall, when earlier variants were circulating. The FDA typically adopts the committee’s recommendations, and the U.S. Centers for Disease Control and Prevention usually then recommends the shots for specific groups within a few days. If authorized, the Novavax vaccine would be the fourth brand available in the U.S., joining the Pfizer, Moderna and Johnson & Johnson shots.

One in 4 symptomatic kids will get long COVID, a large study suggests

Over 25% of children who are diagnosed with COVID-19 may develop symptoms associated with long COVID, according to an analysis of 21 studies on the subject conducted across four continents. Researchers looked at cases of 80,071 children with coronavirus for the study and determined that a quarter of them developed symptoms that lasted between four to 12 weeks after initial infection or developed new persistent symptoms within 12 weeks, according to the study published Monday in medRxiv. The most prevalent clinical manifestations observed were mood symptoms, fatigue and sleep disorders, according to the authors.

State data released Tuesday shows coronavirus cases are continuing to fall – slightly – in the Bay Area. The region is reporting about 3,900 cases a day on average, down about 8% from two weeks ago, when the spring surge appears to have started to level off. Health officials have said they remain wary of a possible uptick in cases again due to seasonal gatherings like graduations or the penetration of more infectious or immune-evasive variants.