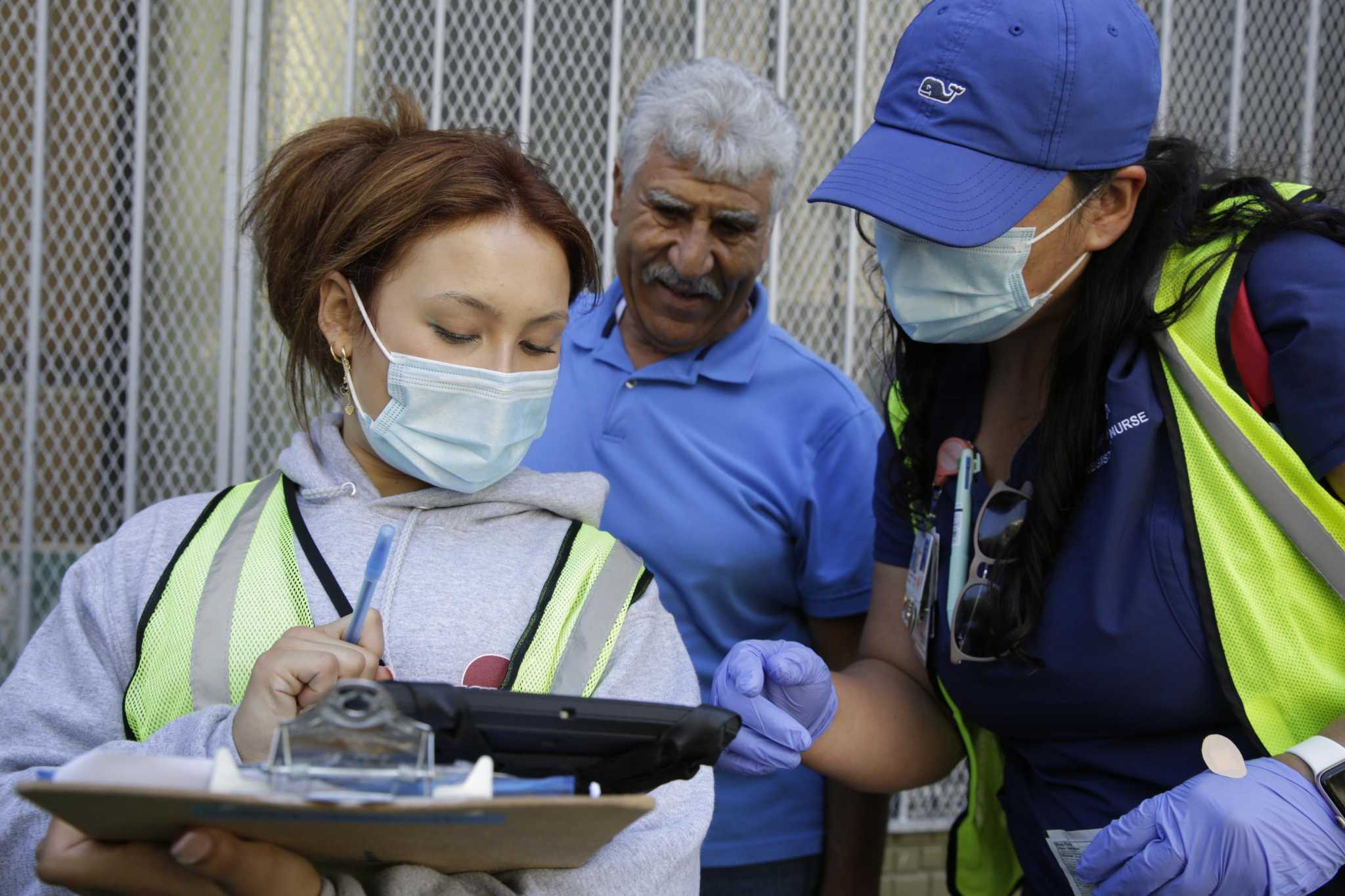 Vaccine uptake for the youngest eligible children in the U.S. continues to lag, with just 7% of those between the ages of 6 months and 4 years having received at least one dose of a COVID vaccine. A growing number of Americans say they’ve “moved on from the pandemic,” according to a new poll. San Francisco reported the lowest average of new coronavirus infections since early March, but hospitalizations ticked back up.

COVID increases Alzheimer’s risk by up to 80%, study finds

Older adults who have had COVID-19 are at 50% to 80% higher risk for a new diagnosis of Alzheimer’s disease within a year, according to a study published Tuesday in the Journal of Alzheimer’s Disease. Researchers at Case Western Reserve University analyzed at electronic health records of 6.2 million patients ages 65 and older who received medical treatment between February 2020 and May 2021 and had no prior diagnosis of Alzheimer’s. They compared results for 400,000 patients infected with COVID-19 against 5.8 million individuals who were not infected in the study group, finding that over a one-year period those in the former had a 0.68% chance of developing Alzheimer’s compared to 0.35% in the non-COVID cohort. The risk was highest among women aged 85 and older. “The factors that play into the development of Alzheimer’s disease have been poorly understood, but two pieces considered important are prior infections, especially viral infections, and inflammation,” said Pamela Davis, a research professor from Case Western Reserve School of Medicine and co-author of the study.

Researchers who searched for content about prominent news topics on the social media app TikTok said they found that nearly one in five of the automatically suggested videos contained misinformation about issues such as COVID-19, climate change, or Russia’s invasion of Ukraine. In a report published Wednesday by NewsGuard, researchers said the service “pumps toxic misinformation to its young users.” Searches for information about “mRNA vaccine,” for instance, yielded five videos (out of the first 10) that contained misinformation, including baseless claims that the COVID-19 vaccine causes “permanent damage in children’s critical organs,” according to an Associated Press analysis of the report. TikTok, owned by the Chinese company ByteDance, is the second most popular domain in the world, according to online performance and security company Cloudflare, exceeded only by Google. Steven Brill, the founder of NewsGuard, a firm that monitors misinformation, questioned whether the company deliberately allows misinformation to proliferate as a way to sow confusion in the U.S. and other Western democracies. “It’s either incompetence or it’s something worse,” Brill told The Associated Press. TikTok released a statement in response to NewsGuard’s report noting, “We do not allow harmful misinformation, including medical misinformation, and we will remove it from the platform.”

A majority of staffers at The New York Times have refused the company’s demand that they return to the office amid another rise in coronavirus cases in New York, according to the union that represents them. “Today, we delivered to the leadership of The New York Times the names of nearly 1,300 NewsGuild member employees who have signed a pledge to continue to work remotely this week, the first week the company wants us back in the office,” the Times Guild said in a Twitter post on Monday. The union said members of the newspaper’s Tech Guild and Wirecutter joined it in the pledge and believed the company was compromising workers’ health and safety. “We will continue to produce high-quality, award-winning work while reminding the company it cannot unilaterally change our working conditions,” the message continued. The company reportedly offered free lunch boxes as an incentive to come back to in-person work this week. In the letter, obtained by the Daily Beast, the employees said there is “a strong likelihood” they would strike if The New York Times did not allow them to continue to work from home.

“End is in sight” for COVID-19 pandemic, says WHO leader

The head of the World Health Organization sounded an optimistic note during a briefing Wednesday, saying the world is closer than ever to ending the COVID-19 pandemic. “We are not there yet. But the end is in sight,” Director-General Tedros Adhanom Ghebreyesus told reporters. The virus has killed nearly 6.5 million people globally since March 2020, but vaccines and therapies have curbed the severity of the disease. Ghebreyesus said COVID-related deaths were the lowest on record last week since the start of the pandemic. WHO leaders said that people should not yet let their guard down, as there may be more surges in the future. “We expect there to be future waves of infections, potentially at different time points throughout the world caused by different subvariants of omicron or even different variants of concern,” said the agency’s senior epidemiologist, Maria Van Kerkhove.

California will no longer require screening testing for unvaccinated workers in congregate settings, such as schools, health care facilities, shelters, prisons, and adult care centers, effective Saturday. “Mandated testing of the small number of unvaccinated workers in high-risk settings is not effectively preventing disease transmission as with prior variants earlier in the pandemic,” the state’s health department said in an update Tuesday. Officials said that due to the high rate of vaccine coverage among workers in those settings, the proportion of unvaccinated workers is small enough to no longer be a concern — even though those who have not received their shots remain at higher risk of infection. California’s health care workers are still required to receive primary series and at least one booster, but those with medical or other exemptions are no longer required to do screening testing.

On Monday, the Santa Clara County health officer rescinded a COVID vaccine mandate for workers in high-risk settings. Citing high vaccination rates, Dr. Sara Cody said the requirement, put in place last summer, was no longer necessary. “COVID-19 remains a serious threat to our community, and I urge everyone to continue to protect each other and the most vulnerable among us by masking and staying up to date on their vaccinations with the latest bivalent booster,” she said in a statement. In advance of the state rollback, she also said large health care providers are no longer required to regularly test their employees for the coronavirus, be vaccinated against the flu, or wear a mask. To date, over 87% of eligible county residents have completed their initial COVID vaccination series, and 69% of residents ages 5 and up have received at least one booster dose.

Vaccination uptake stalls for youngest children in the U.S.

Vaccine uptake for the youngest eligible children in the U.S. continues to lag, with just 7% of those between the ages of 6 months to 4 years old having received at least one dose of the life-saving shots against COVID-19 as of Sep. 7, according to a report from the American Academy of Pediatrics. Data from the Centers for Disease Control and Prevention shows figures are slightly higher for the next age group. About 38% of 5 to 11 year-olds have received their first vaccine dose, and 31% have completed their primary series. By comparison, 70% of 12 to 17 year-olds have received their first shot, and 60% have completed their two-dose series. The rate of uptake for young children has steadily declined since mid-August, even though pediatric coronavirus cases are on the rise while the rate of infections in adults continues to fall. There were 83,272 child COVID-19 cases reported for the week ending Sep. 9, with children representing 19.3% of all the weekly reported cases.

In another sign the pandemic is transitioning to endemic status, Contra Costa County plans to close or scale back several public vaccination and testing sites by the end of the year, health officials said Tuesday during a COVID-19 update to county supervisors. The shift comes amid falling demand for vaccination and lab testing, and expectations that the public health emergency declaration will end early next year. Federal funding from the American Rescue Plan Act that the county has allocated to COVID spending is projected to decline significantly each quarter between now and mid-2023. On Oct. 1, the county will close its San Ramon testing site and scale back COVID services at Richmond Auditorium, which currently provides vaccination and testing, to vaccination only. On Jan. 1, it will close vaccination clinics at the Nick Rodriguez Community Center in Antioch, on Oak Grove Road in Concord, and Richmond Auditorium. Now that residents with insurance can access COVID testing, vaccination and treatment through their own providers, the county will tailor its focus to the uninsured population, said county health director Anna Roth.

Americans have “moved on” from pandemic, poll finds

Concern about COVID-19 has hit a low point in the U.S. since the start of the pandemic, even though hundreds of Americans are still dying every day from the virus, according to the latest and final Axios-Ipsos Coronavirus Index released Tuesday. While White House officials anticipate another fall and winter surge, “the latest results find a country that has largely — though not completely — moved on from the pandemic,” states the report which has been running regularly since mid-March 2020. Only 37% of the respondents in the latest poll said they still sometimes wear a mask in public spaces, compared to 71% in September 2021. Few are worried about the most severe or long-term outcomes of the disease. Only about 18% said they are concerned about the symptoms of long COVID; 12% are worried about hospitalization; and 11% about death. Nearly two-thirds of the respondents said there is a small risk or no risk in returning to their normal, pre-COVID life — and nearly half said they already have.