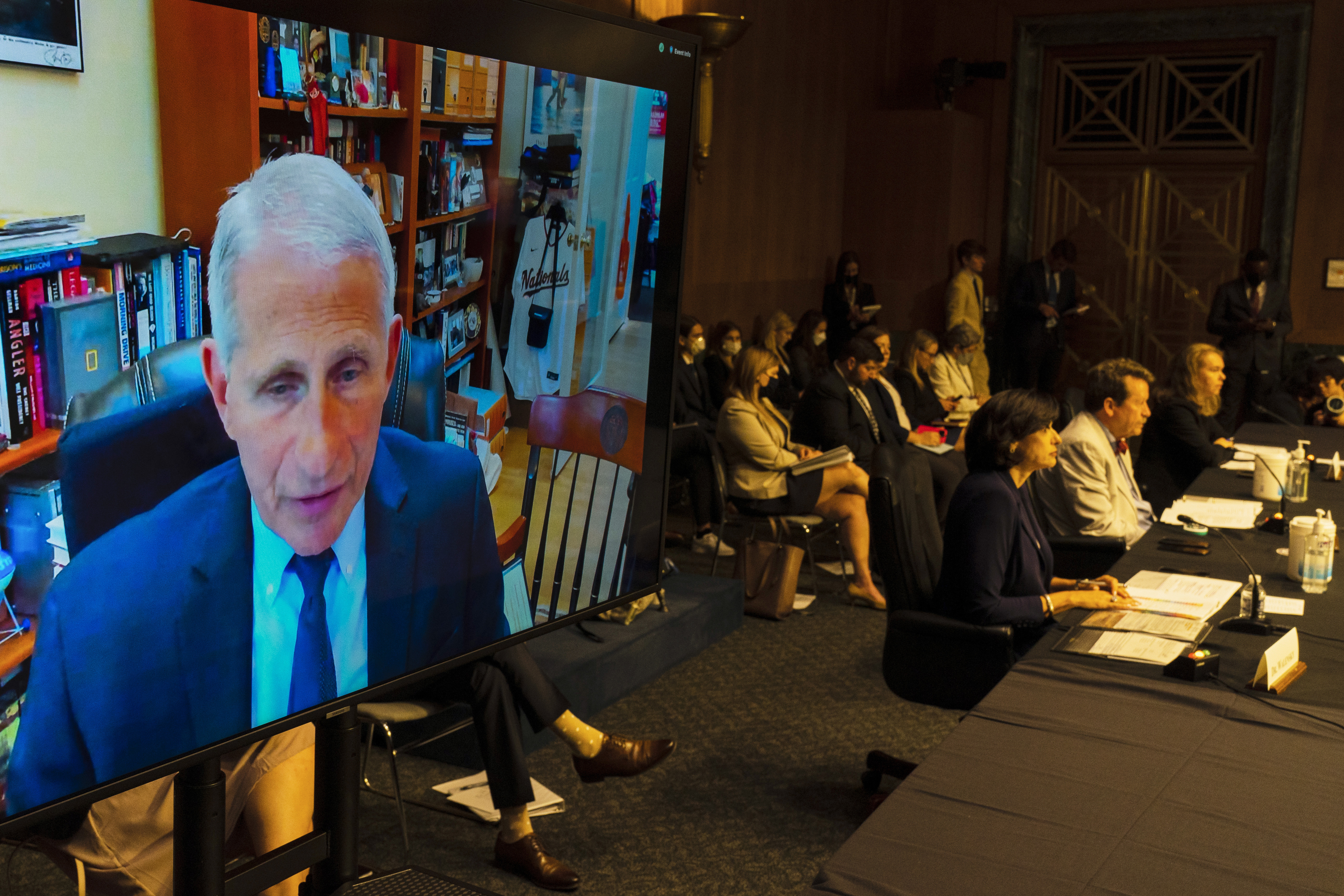 Dr. Anthony Fauci testified by video and in isolation on Thursday at a Senate HELP hearing on the federal pandemic response after testing positive for Covid Wednesday. | Manuel Balce Ceneta/AP Photo

Despite this week’s Covid-19 diagnosis, the White House’s top medical adviser and National Institute of Allergy and Infectious Diseases Director Anthony Fauci was still up for his usual sparring with Sen. Rand Paul (R-Ky.).

The 81-year-old infectious disease expert testified by video and in isolation on Thursday at a Senate HELP hearing on the federal pandemic response after testing positive for Covid Wednesday. Fauci is fully vaccinated and has received two boosters, and is taking the antiviral Paxlovid. It is not yet known how he was exposed to the virus.

Yet Fauci and Sen. Paul got into their typical heated back-and-forth during the senator’s allotted time for questioning.

“Are you going to let me answer a question?” Fauci quipped amid a flurry of interruptions from Paul, who is also a medical doctor. “Soundbite number one,” he added.

Sen. Paul first asked Fauci if there was direct scientific evidence that booster shots prevent hospitalization and death in all people age 5 and older. When Fauci noted that the booster recommendations were based on assumptions and antibody data, Paul fired back: “If I give a patient 10 mRNA vaccines and they … make antibodies each time, is that proof we should give 10 boosters, Dr. Fauci?”

“I think that is somewhat of an absurd exaggeration,” Fauci said.

Sen. Paul then changed his line of questioning to the royalties scientists from the National Institutes of Health may have received from companies, especially vaccine makers. “Can you tell me that you have not received a royalty from any entity that you ever oversaw the distribution of money in research grants?” he asked.

As Fauci tried to answer, the two who have frequently butted heads during the pandemic, continued to squabble and interrupt each other.

Eventually, HELP Committee Chair Patty Murray (D-Wash.) cut off the argument. “Sen. Paul, your time has long over-expired. I gave you an additional two-and-a-half minutes, the witness has responded, we are going to move on,” she said.

The topic at hand: Along with Fauci, witnesses Robert Califf, the Commissioner of the Food and Drug Administration; Dawn O’Connell, Assistant Secretary for Preparedness and Response, and Rochelle Walensky, director of the Centers for Disease Control and Prevention, appeared before the HELP committee to discuss the White House’s request for additional Covid-19 funding to maintain the federal public health response and surveillance programs.

Murray and other Democrats voiced support for the request, while Ranking Member Richard Burr (R-N.C.) and other Republicans asked for more accountability from the agencies before they approve any more funding.

On vaccinations and treatments: When asked about the timing for vaccines for the youngest children, Fauci said he believed it was likely that it would happen soon. “The data look really good, so I anticipate that it will happen,” he said.

Despite the shutdown, Califf expects a surplus of formula in the next two to three weeks, assuming companies are able to meet their production estimates and there’s not another natural disaster impacting production.

“One thing that’s happened is we now get production data from all the companies involved,” Califf said. “It adds up to a surplus relative to the needs that are demonstrated by the number of babies using formula over the past several years. So we should be over that number easily.”

“Let me read something from Elon Musk, who’s asking Tesla workers to go back to 40 hours a week. ‘The more senior you are, the more visible you must be,’” said Sen. Bill Cassidy (R-La.). “‘If you’re underperforming and you’re not showing up, that is not good stewardship,’” he added.

When asked by Sen. Tina Smith (D-Minn.) if remote work was limiting workplace performance, each of the four witnesses said that it was not.

“I’ll just say, I was at Google before this, as opposed to Elon Musk,” said Califf. “I think Google’s doing pretty well with their hybrid program.”