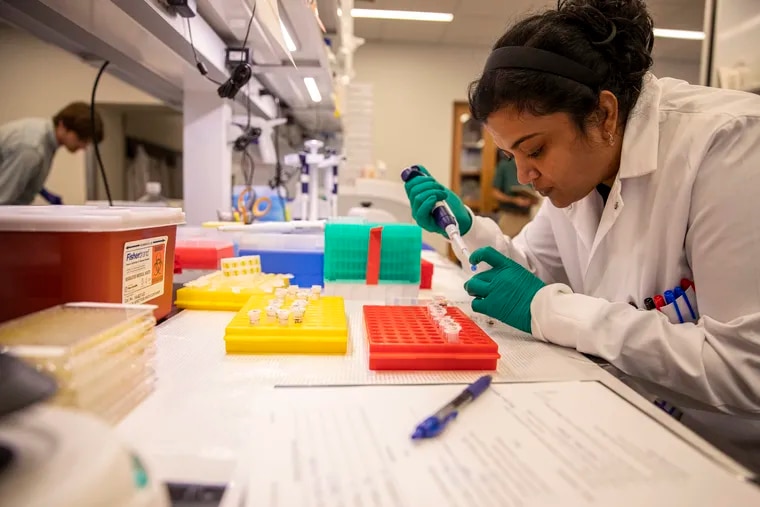 Her gloved fingers working quickly yet carefully, Garima Dwivedi filled row after row of little wells on a plastic laboratory plate, pushing a button to squirt drops of clear fluid she had extracted from the blood of mice.

The mice had been vaccinated against a coronavirus infection. Like so many other scientists throughout the COVID-19 pandemic, Dwivedi wanted to see if the animals had responded by making antibodies.

But not just for this coronavirus. This new vaccine, in the University of Pennsylvania lab of Drew Weissman, is designed to protect the world against multiple coronaviruses — including those we don’t know about yet.

Weissman’s research on messenger RNA helped pave the way for the original COVID vaccines, as well as the new boosters tailored to the omicron variant. Yet even before the FDA cleared the initial shots from Pfizer and Moderna, in late 2020, the Penn scientist was worrying about the next pandemic.

In less than 20 years, at least three dangerous coronaviruses have jumped from animals to humans. Before the COVID virus emerged in late 2019, there were SARS and MERS, each of which sickened thousands of people worldwide. A fourth new coronavirus, little known outside China, has so far been found only in pigs. But it’s a grim one, having killed thousands of animals since 2016.

More than a dozen teams of scientists worldwide are now racing to stay ahead of the next one by developing what’s known as pan-coronavirus vaccines. Weissman, 63, is involved with four of them.

Some are designed to guard against all future variants of the COVID virus, as well as the older SARS and MERS. Others might also protect against less closely related coronaviruses that so far have been found only in bats. Some might even work against ones that cause the common cold.

For years, other scientists have tried to make a similarly broad, one-and-done vaccine against the flu, with limited success. But early evidence from Weissman’s lab and others suggests that with coronaviruses, the challenge may be more surmountable. He says we can’t afford not to try.

“Coronaviruses have caused three epidemics in the past 20 years,” he said. “We have to assume there will be more.”

The first COVID vaccines taught the immune system to recognize, and make antibodies against, the coronavirus spikes — the dozens of little proteins that stick out from the surface of each virus particle.

That made sense. The virus uses these spikes like a lock pick, breaking through the membranes of cells in humans and other animals. But in someone who’s been vaccinated, antibodies latch onto this lock pick so that it no longer fits a certain receptor on the cell’s exterior — the equivalent of a keyhole.

In the early rush to develop a vaccine, scientists reasoned that was enough. No need to teach the immune system about the rest of the virus if the spike can’t get through the front door.

Then came the delta variant, followed by omicron. The spike picked up a series of shape-shifting mutations that somehow allowed it pull off a double stunt: avoiding recognition by the antibodies, yet still fitting the lock well enough to open the door.

That’s where the next-generation vaccines come in.

In Weissman’s lab at Penn, Dwivedi was testing mice for their response to one of them: a virus-like particle that contains both the spike and other structural proteins.

The idea is that while the spike can change its shape and retain the ability to penetrate a cell, the other proteins appear to be similar across multiple COVID variants — and even across multiple types of coronaviruses. Teach the immune system to recognize these shared proteins, or so the theory goes, and it will be prepared to ward off a variety of threats.

But first, it has to work in mice.

“It’s important to see the response in the animals before you even think about injecting the vaccine in humans,” Dwivedi said.

Nearby, colleague Benjamin Davis was analyzing the virus-like particles to make sure they contained the correct proteins. Magnified many thousands of times on an electron microscope, each particle looked like a child’s drawing of the sun — a blank circle with little rays all around the edge.

Basically, it’s a coronavirus with nothing inside — festooned with enough different proteins to give the immune system a chance to develop an array of defenses, yet lacking the internal machinery it would need to cause a real infection.

Predicting the next pandemic

But how real is the threat?

Using a combination of demographic and antibody data, one recent study suggests that coronaviruses are jumping from bats to humans far more often than is commonly appreciated — likely thousands of times a year.

In most cases, these spillovers appear to fizzle out, says Ken Field, a Bucknell University biologist who studies the immune system of bats. The virus may have picked up the ability to jump from animal to human, but not the ability to make copies of itself inside the person — nor the ability to be transmitted from that person to the next.

Still, if viruses jump from animals to humans thousands of times a year, every so often it’s going to be a bad one.

Weissman, the Penn scientist, likens it to rolling the dice.

“In most cases, they just burn out,” he said. “But every so often, you get a bad roll.”

Not that bats have a lock on transmitting viruses to humans. The flu originally came from birds. Other viruses come from rodents, foxes, or raccoons. The key is to exercise caution when interacting with wild animals of all kinds, Field said.

But with continued clearing of forests, industrial farming, and air and rail service connecting formerly isolated areas, risky exposures may be on the rise.

“We’re making further and further incursions into what used to be wild areas,” he said. “The animals leave those areas and come out.”

How the flu is different

Scientists have tried to make universal vaccines in the past, primarily against the flu. But so far, the goal has been elusive.

That’s partly because the flu’s genome has eight segments, including those “H” and “N” portions that lend their name to such strains as H1N1 or H3N2. If a person is infected by more than one flu virus at once, these segments can be swapped, recombining into new virus varieties against which vaccines are less potent.

Coronaviruses are more stable. Yes, they mutate, as the world was reminded with delta and omicron, but scientists hope to train the immune system to focus on the parts that remain relatively unchanged.

Yet much remains unknown about how well these broad-based vaccines will protect humans. A key concern is that the immune system forms an indelible memory of the first time it encounters a virus or a vaccine based on that virus, said Mohamad-Gabriel Alameh, a biomedical engineer who is overseeing the virus-like particle project in Weissman’s lab.

This initial memory is so strong that in future encounters, if a person is vaccinated against a slightly different version of that virus, the immune system may respond with antibodies that are more closely matched to the original exposure.

“Are these vaccines broadening the protection?” Alameh said. “If not, we need to change the strategy.”

So far, in tests of the virus-like particles, the mice have generated antibodies that match both the original COVID as well as its omicron variant — a good sign. Tests with other virus strains lie ahead.

If all goes well, an early-stage trial in humans could happen by early next year, funded in part by the Coalition for Epidemic Preparedness Innovations (CEPI), a nonprofit foundation based in Oslo.

Weissman is involved in three other broad-spectrum coronavirus vaccines with different strategies, including collaborations with scientists at Duke University, the University of North Carolina, and Los Alamos National Laboratory.

All are showing early signs of promise. All consist of genetic instructions in the form of messenger RNA, the technology he developed with partner Katalin Karikó two decades ago. One involves an artificial spike made with pieces from multiple coronaviruses. Another features an array of virus fragments attached to a molecule called ferritin — a version of the protein that carries iron in the blood.

Cautious by nature, Weissman is unwilling to say which one he thinks will offer the broadest protection. Perhaps several of the strategies will prove successful, and they could be used in a combination vaccine.

“In science, you like to have as many different options as possible,” he said. “We just have to test them all, and see which works best.”

The only thing he’s sure about is that more epidemics lie ahead.