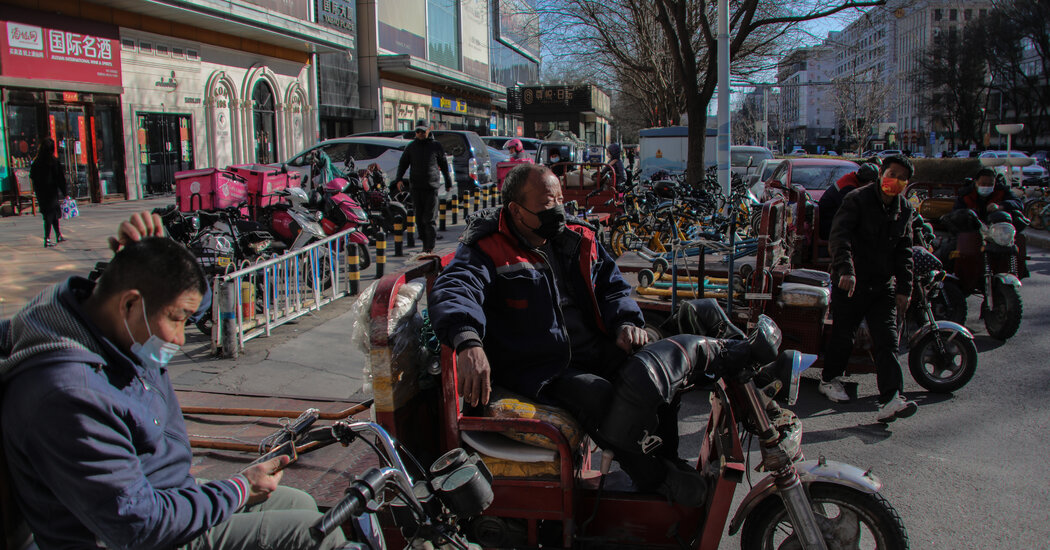 After over a month in lockdown, Zeng Jialin could finally return to the Shanghai auto parts factory where he had worked. He was about to be released from a quarantine facility, having recovered from Covid, and was desperate to make up for the many days of wages he had missed.

But on Tuesday, the day he was supposed to be released, someone in the crowded isolation facility tested positive again. Mr. Zeng, 48, was ordered to wait 14 more days.

“I have three kids, in college, middle school and elementary school. The pressure is huge,” he said in a phone interview from the facility. Much of his $30 daily wage had supported them. “I also owe money to the bank, so I’m very anxious.”

As China battles its worst coronavirus outbreaks, its uncompromising determination to eliminate infections has left millions unable to work. Stringent lockdowns, hitting city after city, have forced factories and businesses to shut, sometimes for weeks, including in some of the country’s most important economic centers.

Two groups have been especially hard-hit: migrant workers — the roughly 280 million laborers who travel from rural areas to cities to work in sectors such as manufacturing and construction — and recent college graduates. Nearly 11 million college students, a record, are expected to graduate this year.

China’s campaign against the virus has rippled economically around the world, snarling global supply chains and dampening imports. But employment woes may particularly concern Chinese leaders, who have long derived much of their political authority from their promise of economic prosperity. As lockdowns have hampered people’s ability to pay rent and buy food, many have grown increasingly frustrated with the authorities’ zero-Covid policies. Sometimes, dissatisfaction has erupted into rare public protests.

China’s No. 2 official, Li Keqiang, announced recently that the government would take the unusual step of distributing living allowances to unemployed migrant workers and subsidize companies that hired young people.

“The new round of Covid flare-ups has hit employment quite hard,” Mr. Li said on April 27. “We must do whatever possible to boost job creation, especially for key groups such as college graduates.”

It is difficult to judge the true scale of the problem. Officially, urban unemployment, the government’s primary indicator, grew just 0.3 percent between February and March, even as lockdowns paralyzed the economic engines of Shenzhen and Shanghai.

But the official unemployment figures are widely considered an undercount. They do not capture many migrant workers, and they also only count people as unemployed if they are able to start working within two weeks. That would exclude people under extended lockdowns or the growing numbers of young people deferring job searches.

The government’s new support measures suggest that the problem is more serious than officials have let on, said Stephen Roach, the former chairman of Morgan Stanley Asia, now a senior fellow at the Jackson Institute for Global Affairs at Yale University. The government had also increased unemployment payments for migrant workers before the global financial crisis in 2008.

“The announcement itself is a hint that there is potentially something a lot bigger going on in this contingent piece of the labor market,” Mr. Roach said. “This could well be China’s biggest challenge since the ’08-09 period.”

China’s migrant workers, though they form the backbone of the country’s economy, have always eked out precarious livelihoods. They earn meager wages and have almost no labor protections or benefits, circumstances made worse by the pandemic.

Workers often live in company dormitories or cheap temporary accommodations, but when factories shut down, many could no longer afford rent or became trapped on their work sites, according to Chinese news reports and social media posts. Some slept under bridges or in phone booths.

Yang Jiwei, a 21-year-old from Anhui Province, worked as a waiter in Shanghai when the lockdown began. His residence, shared with four other people, had no kitchen supplies, so they could not cook the few packages of vegetables and meat that local officials had provided. He had been eating a dwindling supply of instant noodles.

Delivery workers, some of the only laborers allowed to continue working, had to choose between forgoing income or risking being locked out of their homes. Others took high-risk jobs building or staffing quarantine facilities, only to become infected themselves.

Officials in Shanghai have acknowledged that the number of homeless people has increased during the lockdown. Local and central authorities have pledged support, but many questions remain.

When Mr. Li, the premier, announced the expanded unemployment subsidies, he did not specify how much money would be provided. (Xinhua, the state news agency, said that the government this year has allocated about $9.3 billion in unemployment subsidies.) Nor is it clear how workers will receive the money. Though China has unemployment insurance, many migrant workers are ineligible or do not know how to claim it.

Mr. Zeng, the auto parts factory worker, said he was not aware of Mr. Li’s remarks and had never heard of unemployment insurance. He hoped to be employed after being released from quarantine but knew that he might have to return home to Guizhou Province instead.

Still, any political risk to Beijing is likely to remain small, said Aidan Chau, a researcher at China Labour Bulletin, a Hong Kong-based advocacy group. The migrant workers’ pain, while acute, will likely ebb as individual lockdowns ease. The government has also promised to invest in infrastructure projects to provide more construction jobs. And migrant workers in general have little political power and can be silenced by local officials if they complain.

The more intractable problem may be white-collar employment. Resistance in Shanghai to the lockdown has been fueled in part by its large population of well-educated residents, who are more accustomed to speaking out even in the country’s highly controlled environment. In late March, residents of one middle-class community gathered outside and chanted, “We want to eat, we want to work!”

Of particular concern are the country’s ballooning ranks of college graduates. Policymakers have worried for years about how to ensure an adequate supply of jobs for them. But the shortage has become especially dire this year.

At the same time as lockdowns have battered small and medium enterprises, the government has also embarked on a wide-ranging regulatory crackdown on sectors including technology, real estate and education — once highly desirable industries for young people. Mass layoffs have ensued.

There were just 0.71 jobs available for every recently graduated job applicant in the first quarter of this year, the lowest figure since data became available in 2019, according to a report by Renmin University in Beijing and Zhaopin, a jobs website.

“For a country that is always fixated on social stability, to have your young people struggling for employment as they get out of college is not exactly what a system like that would like,” said Mr. Roach, at Yale.

Mr. Li’s promises to aid college graduates last month included plans to help them start their own businesses and to subsidize companies that offered internships.

Even internships are hard to come by. To increase his odds of landing one this semester, Xu Yixing, a vocational college student in Shanghai, had offered to work unpaid but was still turned down by his top choices. A pharmaceutical company eventually hired him but let him go when Shanghai locked down.

Mr. Xu, who studies computer applications and advertising, said he was not overly anxious about the competition. It was the pandemic that worried him.

“With the epidemic, that just depends on fate,” he said. “It doesn’t matter how hard you work.”