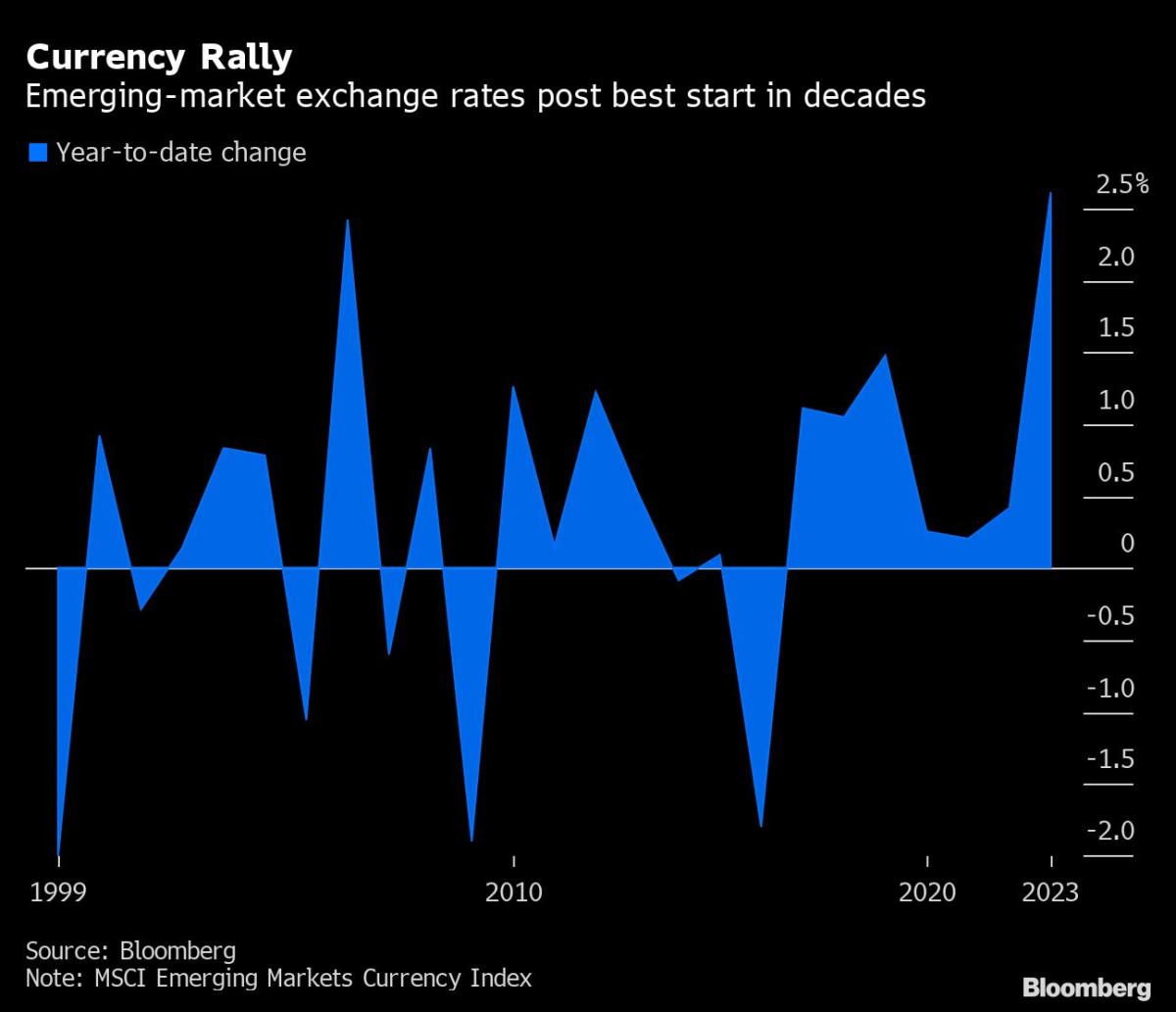 (Bloomberg) — The China reopening story is fast becoming the most important trading theme in emerging markets, so figuring out its potential impact across asset classes is vital for global investors.

For stocks, it’s a boost as it promises to raise consumer demand, improve corporate cash flows and revive trade volumes. For currencies, however, it could be a drag by reducing real yields via inflation, pressuring China’s current account and delaying a policy pivot by the Federal Reserve. For bonds, it’s a mixed offering.

The nation’s easing of the Covid Zero policy and stimulus to revive growth have sent Hong Kong-listed Chinese stocks to the best start to a year since 2006, the yuan to a six-month high and its bonds toward a third monthly rally. It has also sparked gains across emerging markets, from the Thai baht to South African rand and Brazilian stocks. Projections show the second-biggest economy may grow at 4.8% in 2023, compared with a 0.4% expansion in the US and 0.1% in the European Union.

“The China reopening story will be the key driver of emerging-market sentiment, bringing positive spillovers especially to regional economies and global commodity suppliers,” said Galvin Chia, a currency strategist at NatWest Markets in Singapore. “China on the way up at a time when the US and the Eurozone are on the way down is definitely a source of optimism as it will partially offset the demand slowdown.”

Developing-nation stocks and currencies have made the strongest start to a year since the 1990s, and bonds are posting the best gains in more than a decade, as investors who stayed on the sidelines during China’s pandemic struggles are coming back. GAMA Asset Management turned bullish on emerging markets last month. Fidelity International, which was bearish for most of the past year, is now overweight the assets, favoring China and Latin America.

“China’s pro-growth policies was the last driver I was waiting for,” said Rajeev De Mello, a global macro portfolio manager at GAMA. “Taiwan, South Korea and Malaysia will be the bigger beneficiaries of a greater Chinese demand for goods, while Chile, Brazil, Indonesia and South Africa offer exposure to China via their commodity exports. The opening up of international travel will benefit first the closest destinations for Chinese tourists like Thailand.”

What’s more, China’s narrowing factory-gate deflation has hinted at a return of activity, while a small up-tick in consumer inflation still leaves room for the central bank to add stimulus. Morgan Stanley expects the yuan’s gains to continue and its quant strategists say hedge funds and long-only money managers have begun looking for A-share ideas. BNP Paribas SA has raised the target for the MSCI Emerging Markets Index, saying policy support will ensure China’s growth above 5% this year.

But the run of optimism is beginning to attract its critics. As Chinese factories roar back to life, investors are debating the risk that inflation pressures will increase long before growth impulses take root. UBS Group AG says the yuan is expensive and the China reopening theme is better played via stocks and rates payers. When analyzed through the balance-of-payments lens, the currency has more to lose from the reopening, strategists headed by Manik Narain wrote.

Some analysts are going a step further and raising the specter of stagflation — a period of high inflation coinciding with little growth. The concern that the Fed would cite inflationary pressures coming from China to stay hawkish also weighs on the outlook.

“The reopening will exert pressure on Chinese export prices and complicates the Fed picture,” said Aninda Mitra, a macro and investment strategist at BNY Mellon Investment Management in Singapore. “While the prospect is remote, investors should be mindful of the risk of stagflation. That will prevent the Fed from cutting rates even as the economy weakens, and rates could stay higher longer.”

By last week, China’s currency advanced 9% since early November when the reopening talk began doing the rounds in markets. Money managers are now betting it’s become overvalued. JPMorgan Chase & Co. says the yuan’s carry is no longer attractive and it will look to re-establish some short positions in the offshore markets as the “China reopening euphoria” gets priced in.

“Considering the pace at which the reopening is occurring, it is inevitable that inflationary pressure will emerge in China,” said Eugenia Victorino, head of Asia strategy at SEB AB in Singapore. “A pro-growth China policy typically leads to an increase in energy prices, at a time when global supply is constrained. That could prevent central banks from pivoting quickly to a dovish stance.”

For now, though, most investors are happy to ride the rebound and its spillover into emerging markets. Emerging-market stocks rose on Monday and the average sovereign risk premium narrowed 9 basis points to 453, according to JPMorgan data.

“Without question, the re-opening of China is improving emerging-market growth expectations and that is supporting broader market sentiment across the asset class,” said Paul Greer, a money manager at Fidelity International in London.

–With assistance from Ronojoy Mazumdar.