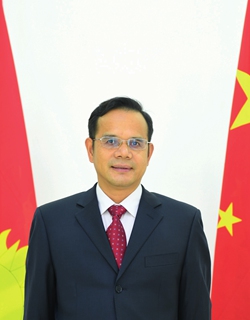 Editor’s Note:
As Chinese State Councilor and Foreign Minister Wang Yi embarks his official visit to Kiribati on Friday, many expect a new impetus the journey can bring to the bilateral ties to heighten cooperation into a higher level for better serving local people’s demand for development.
Since the resumption of diplomatic ties in September 2019, China-Kiribati relations have got off to a good start and achieved fruitful results. In a recent exclusive interview with the Global Times (GT) reporters Hu Yuwei and Bai Yunyi, Chinese Ambassador to Kiribati Tang Songgen (Tang) shared his views on the most impressive progress in friendship of two countries over past two years, and warned some Western countries to stop groundless smearing and interference over China-Kiribati development.

GT: What new impetus do you think Chinese State Councilor Wang Yi’s visit will inject into the development of China-Kiribati relations?

Tang: Wang Yi’s visit is the first high-level Chinese delegation to Kiribati since the resumption of diplomatic ties. It is an important milestone in the development of bilateral relations. It will further enhance political mutual trust between the two countries.
It will also promote the Belt and Road Initiative as well as Kiribati’s long-term development blueprint for the period from 2016 to 2036, as the two sides will enhance practical cooperation in a wide range of areas including infrastructure, fighting COVID-19 and addressing climate change, adding new impetus to the realization of independent and sustainable development.
Wang’s visit will promote the building of an even closer China-Pacific Island countries community with a shared future.

GT: Can you comment on the development of China-Kiribati relations since the resumption of diplomatic ties over two years ago? How do local people in Kiribati view China’s role in the country?

Tang: Since the resumption of diplomatic ties, China-Kiribati relations have maintained sound and steady development with increasingly enhanced political mutual trust and tightened exchanges in various fields.
On September 27, 2019, two countries resumed the diplomatic ties, marking that Kiribati is on the right side of history and has returned to the big family of cooperation between China and Pacific Island countries.
The announcement came to a moment that China celebrated 70th anniversary of its founding, and the exciting news undoubtedly added more splendor to this historic moment.
On May 15, 2020, the Chinese Embassy in Kiribati officially reopened, with the five-starred red flag flying high over Tarawa, the capital of Kiribati, for the first time over the past 16 years.
The relationship between China and Kiribati has been suspended for 16 years. In the beginning, Kiribati people did not know much about China. A community leader recently told me that when Chinese diplomats first arrived over two years ago, local people would look at you from behind doors, trying to figure out who you are and what you are doing here.
One interesting scene is that when we visited an outer island of Kiribati, the people on the island had almost never seen Chinese people, and they were a little shy and alienated when they first met us. But just one day later, we were getting along well with the locals, sitting in their straw shed, doing local traditional dances, tasting their freshly caught fish and coconuts. When we left, local friends surrounded us and felt sad to say goodbye. This is the epitome of Kiribati people’s changing attitude toward China.
Over the past two years, my colleagues and I have visited a dozen of islands, dozens of schools and hundreds of communities, dressed in local costumes, greeted locals in their language and told them the story of China’s development. Today, we are proud to say that we are really welcome in local communities, with invitations to events from various communities pouring in like snowflakes.
Some locals presented us at their sacred Maneaba with handmade straw mats with “Chinese Embassy” and two national flags printed, and also made shirts with Chinese characters and my name on them to express their sincere friendship.
Kiribati, with one of the weakest medical systems in the world, faced great pressure and challenges when the COVID-19 pandemic swept the world in 2020. Facing closed borders and suspended flights, China quickly sent a shipment of anti-epidemic supplies by sea, becoming the first batch of foreign aid to Tarawa.
Early this year, when the Kiribati epidemic broke out for the first time and rapidly worsened, China immediately responded to Kiribati’s request and delivered urgently needed medical equipment and supplies to Kiribati, which was praised by many local people.
More, in March Chinese fishing boat rescued a Kiribati fisherman who had been lost for more than 20 days after drifting thousands of kilometers offshore, which was praised as a “miracle” by local people.

GT: Some politicians, including those from the US and Australia, have repeatedly accused China of strengthening its presence in countries such as Kiribati through infrastructure construction such as ports and huge economic support, can you comment on these accusations?

Tang: I have noted the repeated biased reports by some Western media to distort and smear China-Kiribati cooperation. I want to stress that China has always carried out cooperation at the request of the Kiribati government in the principle of mutual respect and mutual benefit, without any political strings attached or geopolitical objectives.
Instead, some countries treat island countries as their “backyard,” disrespect them and never care about their true benefits. They view China-Kiribati relations from the perspective of colonizers and with a Cold War mentality, which naturally leads to distorted conclusions.
Over the years, Western countries have either neglected the region for long periods of time, or withdrew their local aid institutions as well as cooperative projects, resulting in large development deficits.
Some Western countries committed the serious evil of nuclear tests in the island countries, which brought endless pain to local people.
In the last century, some Western countries exploited and plundered phosphate resources on the island of Banaba in west of Kiribati, leaving its resources depleted and its people destitute. For years, local people have complained to the International Court of Justice about the colonial depredations of these countries. Those Western countries have no right to point fingers at the growing cooperation between China and the island countries.
I often hear Kiribati friends saying that the West is not really helping the island countries, and they should put away their habitual arrogance and stop bullying them.
When Western media and some politicians deliberately take the opportunity to smear China’s relations with Kiribati, the Kiribati government and people are always the first to stand up and fight back. These are all clear answers.
I would also like to urge these countries to put aside their Cold War thinking, do more to win the trust of the people of the Island countries and contribute more to peace, stability and development in the Asia-Pacific region. The bridge constructed by China Railway First Bureau in Tarawa, capital city of Kiribati Photo: Courtesy of the Chinese Embassy to Kiribati

GT: What principles does China adhere to in developing friendly relations with Kiribati? After China-Kiribati ties resumption, the US and Australia also increased their efforts to woo Kiribati. According to your observation, is Kiribati firmly committed to the One-China principle?

Tang: China has established a comprehensive strategic partnership featuring mutual respect and common development with Pacific Island countries including Kiribati. On the basis of the one-China principle, China respects Kiribati’s development path that suits its national conditions and supports Kiribati in developing its economy, improving people’s livelihood and realizing independent and sustainable development.
China and Kiribati enjoy a natural friendship rooted in history. Last September, we found of a village named “Nantong” when visited an island more than 1,000 kilometers away from Tarawa, and learned that the name was given by the locals in order to commemorate the contribution of and friendship with a Chinese named “Nantong” coming to support local people in the history.
China-Kiribati friendship has also experienced twists and turns. The suspended friendship for over 16 years was called the “lost 16 years” by local people. Kiribati unfortunately missed out on many development opportunities. Today, China’s return will bring more cooperation and dividends, opportunities and choices.
In the new era, Kiribati and other developing countries remain China’s natural allies in international affairs. Meanwhile, Kiribati firmly adheres to the one-China principle. The sound and steady development of bilateral ties will continue to send a message to the world that China must and will be reunified.

GT: What progress has been made in practical cooperation between China and Kiribati, especially in the areas of infrastructure and COVID-19 response? What areas can be further deepened in the future?

Tang: China has provided assistance to tugboats, transport vessels and other infrastructure most needed by Kiribati to improve connectivity among the islands and break development bottlenecks.
China also supports Kiribati by sending agricultural and fishery experts to carry out skills training to share successful experience and help Kiribati develop fishery, coconut and expand e-commerce platforms.
China also donated 90,000 doses of COVID-19 vaccines to Kiribati. Many of the outer islands vaccinated with Sinopharm-produced inactivated vaccine still maintain “zero infection.”
Tens of thousands of solar energy storage systems and solar street lamps were also donated to Kiribati, and toilets and water tanks to local communities are provided to help improve sanitation.
At present, dozens of Kiribati students are studying in China, serving as an important bridge for enhancing mutual understanding between the two peoples.
In the future, the two countries will promote more cooperation projects in infrastructure, energy, and strengthen co-efforts in fishing, coconut, solar energy and tourism to achieve common prosperity.
The two countries share broad consensus on climate change, marine protection and regional denuclearization. We will deepen cooperation and work together to protect our planet.