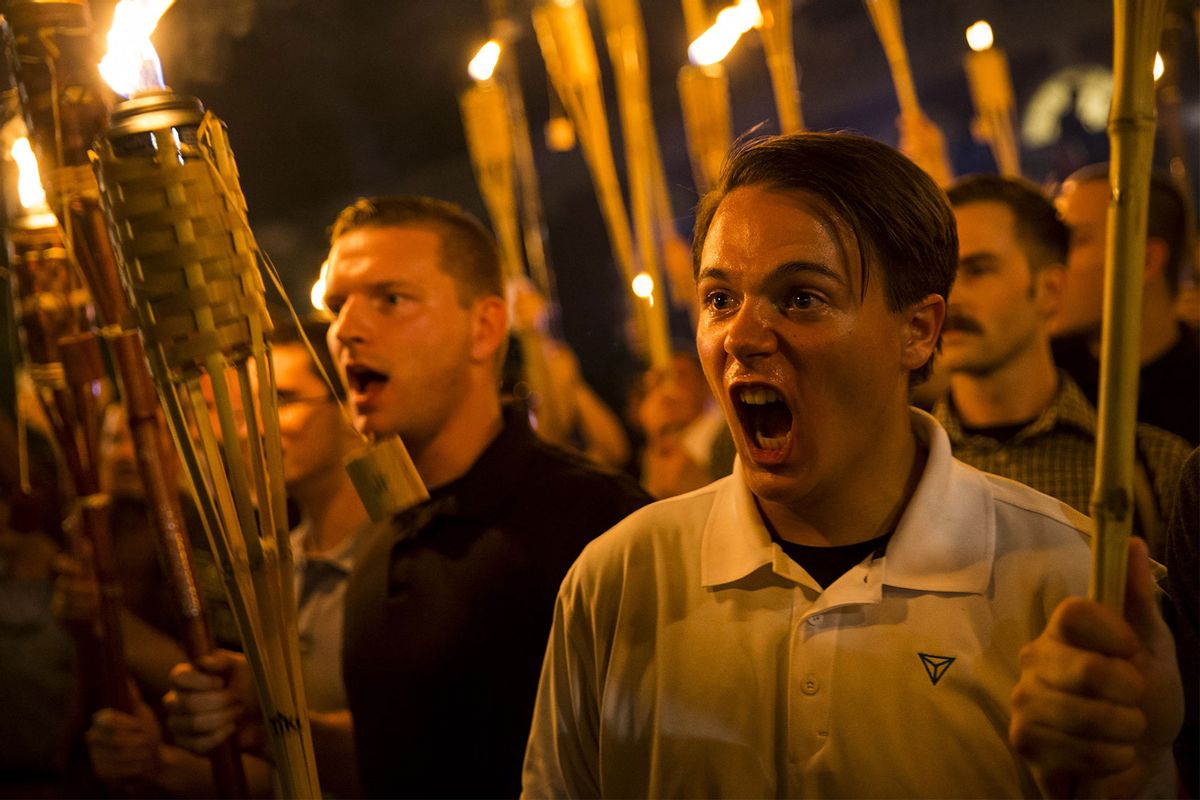 I researched and wrote a lot about white supremacy, particularly in its alt-right manifestation, throughout the course of 2017, namely Donald Trump’s first year in office. I hazarded a number of guesses as to where the movement, and more importantly the reaction to it, was headed. Keeping company with this unsavory crowd over an extended period of time, I came to have a deep appreciation for how characteristically American this movement was, and how right it felt to experience it as a natural growth of individualistic capitalism run amok. But by the end of that year the alt-right panic was being subsumed by the #MeToo panic, and honest discussion about the nature of the white supremacist resurgence became more and more difficult in liberal forums.

Around that time I wrote a long essay (published only recently in three parts) analyzing the fate of the leading figures of the alt-right, and focusing on the various methods proposed to deal with the alleged existential threat, including all sorts of power applied by the state and its legal apparatus. I took an absolutist free-speech position with respect to the neo-Nazis — a stance that seems almost ridiculously outdated in these self-righteous times — and argued in favor of the old-line ACLU position rather than the speech compromises endorsed by critical race theory. I raised the question of watchdog biases, and the dangers of permitting such groups, which are de facto instruments of ever-shifting state policy, such great authority in deciding who gets to speak and who doesn’t.

RELATED: Is free speech a casualty of the Ukraine war? America’s commissars crack down on dissent

As I reviewed the essay recently, it struck me how extensively the reaction to white supremacy has proceeded along highly undemocratic lines, and how it continues to be a harbinger of worse developments yet to come in the polity, to a far greater extent than even I expected.

Violent reaction against speech is now far more pervasive and legitimate than it was at the beginning of the Trump administration. Among millennials and post-millennials, freedom of speech was already viewed as highly questionable. Demonizing Trumpism allowed powerful media companies to assume total control over what speech would be allowed and not allowed. It has become a truly expansive definition, and depends on the whim of the moment. The apparatus of domination and control I described with respect to the alt-right was transposed in its entirety to a thought category called “disinformation” (itself a term of disinformation) and applied to vaccine skeptics or generally anyone who disagreed with official pronouncements about any aspect of COVID-19, even those that were subject to change thanks to new information or scientific reinterpretation.

It has become commonplace for media companies to deny platforms or visibility not just to the most extreme neo-Nazi rabble-rousers like Andrew Anglin and Richard Spencer but to anyone who falls afoul of any aspect of the established liberal worldview on issues of elections, racism, schooling, historical interpretation, science, war, violence, sexuality or indeed anything and everything that doesn’t sit well with the narrow spectrum of reality endorsed by the propaganda arms of the American national security state, fed on illusive notions of meritocratic wokeness.

Want a daily wrap-up of all the news and commentary Salon has to offer? Subscribe to our morning newsletter, Crash Course.

Was this a price worth paying for making the alt-right invisible? To have such an unprecedented level of institutional (albeit non-governmental) censorship in this country? It starts with Alex Jones, and ends up going after Palestinian activists. It always does. I knew it, and anyone with an eye on history should have known it too.

Every form of domination requires an unacceptable other in order to privilege its own power. In the circa-2017 phase of alt-right ascendance, the antagonists were all those who deployed a racist perspective to question the liberal dogma of perpetual progress by slow degrees. The alt-right enemies of immigration, racial equality and even of interracial relationships or the recognition and celebration of minority cultures were demonized as uncouth savages who had no business seeking a political platform in American democracy.

If liberals believe they triumphed over the alt-right, consider Glenn Youngkin, the Biden administration’s Trumpist immigration policies and ever-increasing police violence against people of color.

Yet consider this: Despite the liberal triumphalism associated with banning controversial speakers on campus and shutting down the social media accounts of alt-right influencers, Glenn Youngkin was recently elected governor of Virginia, in large part driven by antipathy toward the (mostly imaginary) teaching of critical race theory in schools. Consider that the Biden administration has to a large extent kept in place Trump’s exclusionary policies on the southern border. Consider that police violence against unarmed black men and other people of color has only accelerated.

But who supports those things? Large numbers of conservative white voters, of course, not just in the devastated Rust Belt but all over the country. But also, going by the shift of Latino voters toward Trump in 2020, a growing number of some of the liberals’ most cherished constituencies as well.

It is not coincidental that once the neo-Nazis were banned, an entire liberal industry arose to teach white people to search out their most minute expressions of racism (by authors like Ibram X. Kendi and Robin DiAngelo), and to turn that into a beneficent self-improvement project, such as one might approach an addiction or an unhealthy diet. Now the enemy is not the alt-right, but everyone who thinks in unpredictable directions about the current state of our political economy.

To be fair, America faces legitimate social and political quandaries: In the current climate we cannot permit more immigration, although  we desperately need it from an economic point of view. We certainly can’t ban it, which would be economically devastating as well as giving in to the nationalists. So the almost comical answer we have settled upon is to maintain a repressive regime toward immigration and construct as enemies everyone who wants either more or less of it.

The urge to suppress the alt-right was not about “democracy” or some other hazy, high-minded ideal. It was about maintaining the status quo, and the recent expansion of the list of enemies is part of a more ambitious campaign to maintain the status quo as it faces even greater threat, especially during the pandemic.

3. White supremacy has been mainstreamed

If censorship and legal targeting of the alt-right were supposed to banish the scourge of white supremacy, let us ask the obvious question: Did it succeed? Obviously it did not, and it arguably made white supremacy, in both its overt and covert manifestations, stronger than ever.

Imagine a situation where a confident liberalism, true at least to its principles of allowing fair market exchange and removing unnecessary obstacles to personal economic advancement, not only permitted the free play of alt-right ideas (or more extreme manifestations) but even encouraged them — in order to draw clear distinctions between right and wrong, trusting the democratic public to make its own decisions. Instead, an authoritarian attitude drove the construction of an illiberal liberalism as the only viable political option. At certain points the mythology of that ideology has bordered on the absurd, as in the depiction of Jan. 6, 2021, as an unprecedented existential calamity, or the various travesties of imagination surrounding the Russiagate scandal. This happened to such an extent that white supremacy started sounding reasonable to some people by comparison.

Liberals present themselves as occupying the reasonable center of political discourse today, but in some ways they are more extreme than the most delusional and paranoid Republicans. They have reduced all of human life and its activities to strict monetary calculation, and have destroyed art, imagination and creativity in the process. Their imaginary visions of democracy, human rights and meritocracy are entirely in the service of  justifying the current form of capitalism, which is trending toward eradicating life on the planet.

Despite liberals’ endless self-scrutiny in search of microscopic evidence of racism, I would suggest they are the most effective carriers of the white supremacy virus.

If I haven’t yet alienated all liberal readers, I would go further, to suggest that despite their relentless search for rooting out micro-racism in their minute words and deeds, liberals are in fact the most effective carriers of the white supremacy virus. Emboldening Israel at the cost of any recognition of the rights of Palestinians is white supremacy. Instigating a massivelyexpensive and apparently endless proxy war against Russia, as a first step in checking or confronting the inevitable hegemony of China (those creepy Asians who’ve become too big for their boots), is white supremacy. Converting the George Floyd protests of 2020 into ultimate advocacy for more money for more police — as nearly all Democrats in positions of power now advocate — is white supremacy. Wanting to “save” Afghan women and children by lamenting the end of the 20-year invasion and then imposing sanctions and stealing their money is white supremacy. Which party, I ask you, is more associated with these policies today?

No one has to believe that liberals steal elections or that vaccines are more dangerous than COVID or that school shootings are false-flag events or that there’s a Jewish conspiracy to replace white people. But censoring these thoughts only gives them more durability, as we ought to have learned from repeated examples over the last few years.

Here’s how it works: An illegitimate thought is censored, which gives it a certain resilience as the wrong way to think, opposed to which is the correct thought. Censorship becomes the force by which the liberal-bourgeois state codifies various elements of power such as to propel them beyond the critique of power. In this dynamic, the unfairness of a two-party electoral democracy representing only narrow bourgeois interests, the unequal and even unscientific foundations of American public health, the interdependence of imperial violence with chaotic domestic outbursts, and the bipartisan consensus over the punitive treatment of immigrants become untouchable issues, precisely because quasi-state censorship has elevated them to the status of sacred truths threatened by extremists and therefore not subject to rational critique. Censorship is the process by which the illegitimate is made legitimate.

In these last days of empire, when liberalism is on the defensive and fighting for propositions that are ecologically and even economically unsustainable, we will not see an end to the violent repression of nonconformism, only its reinforcement. Thus it is that so-called wokeness — which is entirely compatible with corporate globalization, and in many cases strongly aligned with it — becomes the darkest force in the land. It feeds denialism, denies that denialism is real and then denies the humanity of those who aren’t woke enough to accept the boundaries of correct thought, whether they are nominally on the left or the right.

Read more on the rising threat of white supremacy: